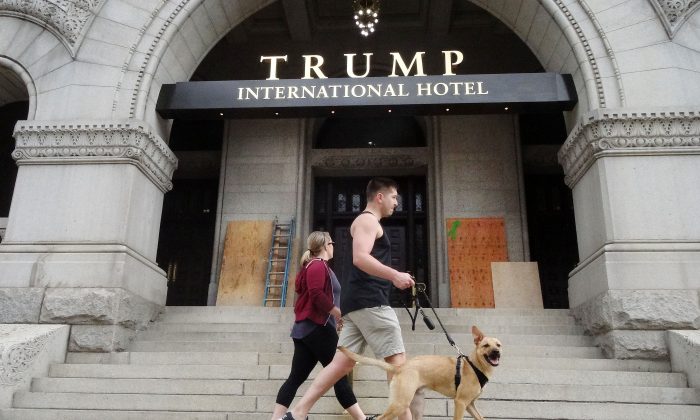 Plywood boards cover the phrase "Black Lives Matters" and "No Justice, No Peace" which was graffitied on the Trump Hotel in Washington on Oct. 2. (OLIVIER DOULIERY/AFP/Getty Images)
US

Workers at the Trump International Hotel in Las Vegas reached a contract with management after pushing for negotiations for a year, while management at a Trump hotel in Washington D.C. has agreed to allow a unionization campaign at that property, union officials announced on Wednesday.

The announcement from the hospitality workers union UNITE HERE and its Las Vegas affiliate, the Culinary Workers Union Local 226, resolves a labor dispute that lasted throughout the presidential campaign.

“We are pleased to have a strong union contract that protects workers,” said Bethany Khan, spokeswoman for the Culinary Union. “We welcome the Trump Hotel Las Vegas workers to the Culinary Union family and we look forward to 2017, where we will continue fighting everyday so that workers have the opportunity to provide for their families.”

Workers angered that Trump employees still didn’t have a contract months after they’d voted for unionization were some of the most dedicated in the effort to stop Republican presidential candidate Donald Trump, and are largely credited with helping turn swing state Nevada blue when national trends favored Republicans.

UNITE HERE called for a boycott of Trump properties nationwide in September in response to the contract negotiation delays in Las Vegas. The Culinary Union staged large protests and marches outside the high-rise hotel, and highlighted the dispute in making their case against the candidate.