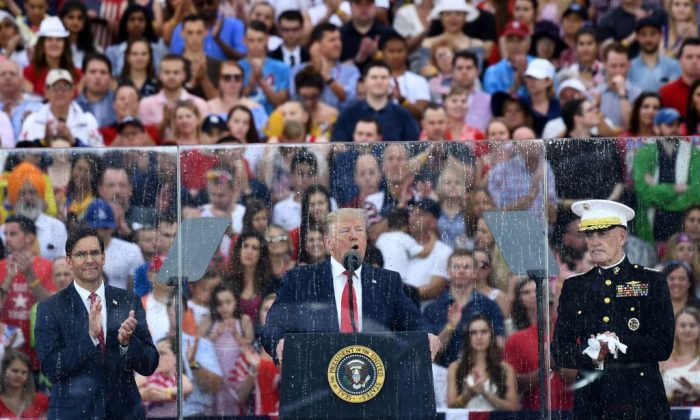 President Donald Trump speaks alongside acting Defense Secretary Mark Esper (L) and the Chairman of The Joint Chiefs of Staff Joseph Dunford during the "Salute to America" Fourth of July event at the Lincoln Memorial in Washington, on July 4, 2019. (Brendan Smialowski/AFP)
Politics

President Donald Trump says a malfunctioning teleprompter was to blame for a slip up during his “Salute to America” speech, where he mistakenly said the army took over airports during the American revolution.

“The teleprompter went out, it kept going out,” Trump told reporters outside the White House on July 5. “Then at the end, it just went out. It went kaput.”

The president also said he was having trouble looking at the teleprompter because of the rain.

Trump addressed the nation during the “Salute to America” celebration on the steps of Lincoln Memorial in Washington on July 4, where he honored America’s heritage, complimented members of the armed forces for defending the nation, and offered an optimistic view of the future.

His speech, which was apolitical, was generally well received. But also he garnered media attention for a blunder he made during an ad-libbed portion where started talking about airports in 1775. The first successful airplane was built in 1903.

“Our Army manned the air—it manned the ramparts. It took over the airports. It did everything it had to do. And at Fort McHenry, under the rockets’ red glare, it had nothing but victory,” Trump said. “And when dawn came, their Star Spangled Banner waved defiant.”

Trump said the teleprompter started malfunctioning in the middle of the sentence that he had stumbled on.

“Actually right in the middle of that sentence, it went out. And that’s not a good feeling. Standing in front of millions and millions of people on television,” the president said. The pressure also caused him to mention the battle of Fort McHenry in the sentence about 1775. That battle at Fort McHenry was actually waged in 1812.

The July 4 events had defied critics’ claims that it would not be well received. A large crowd showed up to hear the president speak, view the military flyovers, and enjoy the fireworks, despite the heavy rain.

Pictures showed the crowd lined up around the memorial and down both sides of the reflecting pool toward the Washington Monument. Before the event, Trump tweeted photos of the crowd.

“A great crowd of tremendous Patriots this evening, all the way back to the Washington Monument!” he wrote.

A great crowd of tremendous Patriots this evening, all the way back to the Washington Monument! #SaluteToAmerica🇺🇸 pic.twitter.com/nJghdfqIhX

On July 5, Trump told reporters that he believes the people, as well as the media, who attended the event “loved it.”

“Well, I can tell you, those people that you see—there’s a lot of people in front of the White House—every one of them loved it,” Trump said. “I would actually say—and I want to sort of give a little appreciation, the media, generally speaking, loved it. They loved the evening.”

“That was just a fantastic evening,” he added.