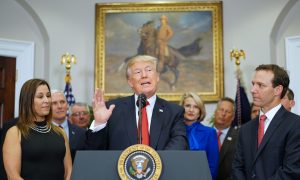 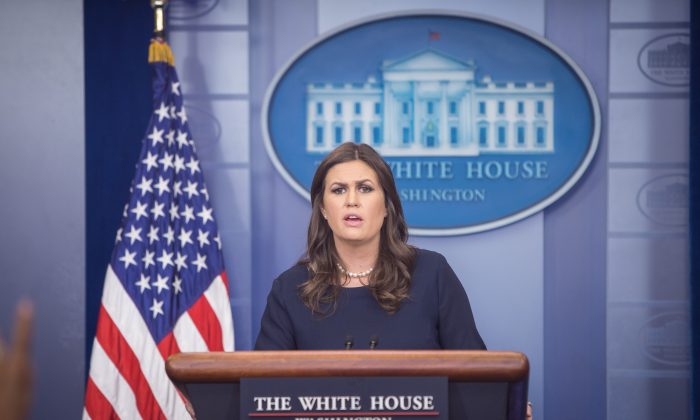 Trump Does Not Support New Healthcare Bill in Current Form

WASHINGTON—The White House said on Wednesday that President Donald Trump is not supporting a temporary bipartisan healthcare bill because it does not provide “relief for all Americans.”

The bill, introduced by senators Lamar Alexander (R-Tenn.) and Patty Murray (D-Wash.), would provide federal funding for Obamacare’s payments to insurers for a period of two years. Trump announced last week that he will stop the payments because they are unconstitutional and are only benefiting insurance companies.

The president said that he supports the bipartisan approach to fix healthcare, but that that the Alexander-Murray bill would only be a “short-term solution so that we don’t have this very dangerous little period.”

I am supportive of Lamar as a person & also of the process, but I can never support bailing out ins co's who have made a fortune w/ O'Care.

Press Secretary Sarah Sanders also said the Alexander-Murray bill is “not a full approach” and that the White House is looking for something “that will go a little further.”

Sanders said that the president wants lower premiums and greater flexibility as well as more competition in the insurance market.

Last week the president signed an executive order aimed at increasing choice and competition in healthcare.

The executive order expands access for small businesses to Association Health Plans, giving them greater purchasing power and a stronger position in negotiations with insurance companies.

The executive order also calls on the Departments of the Treasury, Labor, and Health and Human Services to consider expanding coverage through low cost, short-term limited duration (STLDI) insurance.

This type of insurance is not subjected to the Affordable Care Act (ACA), thus allowing for lower prices. According to the White House, the plans are on average only 1/3 of the cost of the lowest-priced Obamacare plans. Although they are called “short-term,” the proposed plans will have longer terms—the Obama administration limited such plans to three months, and would be renewable.

A Republican healthcare bill was voted down in July after three Republican Sens. voted against it. A vote on a separate bill introduced by senators Lindsey Graham (R-S.C.) and Bill Cassidy (R-La.) was pulled in September after it became clear Senate Republicans were not able to secure enough votes.

President Trump has said he supports the Graham-Cassidy bill and hopes that it will still be voted on in 2018, when it can be passed using the process of reconciliation, which only requires a simple majority rather than 60 votes to pass a bill. The window on using reconciliation for the health care bill in this calendar year has expired.