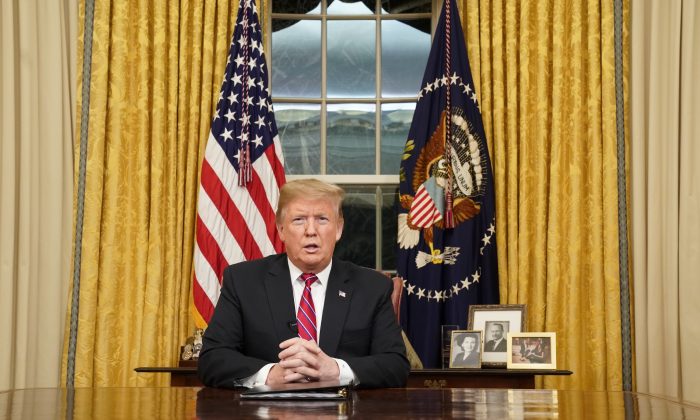 President Donald Trump speaks to the nation in his first-prime address from the Oval Office of the White House on Jan. 8, 2019. (Carlos Barria-Pool/Getty Images)
Viewpoints

Trump Continues to Prepare the Battlefield

A lot has happened since my last column. Transcripts from the congressional testimonies of three key Spygate participants—Bruce Ohr, Lisa Page, and James Baker—have been made public: two of which were revealed right here on the pages of The Epoch Times. In addition, there’s been several other fascinating developments.

Special counsel Robert Mueller will be wrapping up his investigation into the 2016 election in the next couple of months, having found no collusion between the Trump campaign and the Russian government. And with Department of Justice (DOJ) Inspector General Michael Horowitz staring over his shoulder with Page’s and Peter Strzok’s heads hypothetically mounted on the wall behind him, Mueller knows he’s in no position to try to fake anything.

It’s suddenly being reported at places such as ABC News that the usual anonymous sources who’ve spent almost two years furiously leaking about how Mueller has President Donald Trump and his Russian spies exactly where he wants them are suddenly changing their tune and telling their media contacts that perhaps it would be best to begin managing expectations and preparing their audience for something “anti-climactic.”

Desperate Mainstream Media Steps Up Efforts to Save Narrative

That’s why Fusion GPS and other Spygate plotters are desperately seeding the DNC Media Complex including The New York Times, The Daily Beast, and other outlets with absurd stories that don’t stand up to any real scrutiny.

Then, in the last few days, we got that cool The New York Times story about how the FBI launched its sting against Trump as retaliation for his firing of James Comey, and a Daily Beast story about how there’s some intelligence report out there about the Russians infiltrating the NRA and Trump’s team.

What are they doing? They’re trying to save a narrative that’s already dead and it’s nothing but sheer desperation. The side doing all that frantic leaking of fake news stories in the fake news media isn’t winning the fight. Far from it.

They are reduced to this pathetic leaking to try to win a useless battle for public support through the mainstream media, now that Trump holds all the winning cards in the public relations battle.

It won’t help though, when the indictments go down and things move to the prosecution phase for them to cry, “Wait, this can’t be happening, look at what Time Magazine said about me, just look at this glowing profile! I’m a hero! I ‘won’ this public relations battle!”

The evidence meticulously collected over the past two years by the DOJ Inspector General’s office and the U.S. Attorneys through their grand juries will figuratively hang them.

This isn’t a public relations battle. The serious-as-a-heart-attack people leading the real investigations into Spygate demonstrate this when, in comparison to the frantic, desperate leaking of fake disinformation by the other side, they remain resolutely silent as they position their forces.

Sun Tzu on Preparing the Battlefield

The ancient Chinese general Sun Tzu wrote in chapter 6 of his timeless book “The Art of War” about how the successful military leader wins a battle before the fight even begins. Trump knows this chapter well because “Art of War” is his favorite book and he fashioned his book “Art of the Deal” after it.

To win the battle before the fight is joined, pick the ground, prepare it completely to your advantage, and then guide your enemy there. Leave nothing to chance.

As the winning side marshals its forces and prepares the ground, behind the scenes, the Democrats/DNC Media/Spygate plotters can see themselves being surrounded.

Some try to sell you on the idea that the side leaking in a panic—throwing out one quickly debunked fake news story after another is actually about to eat Trump’s lunch. Don’t make me laugh.

The two key places the battleground in this fight will run through–in the move from exposing the Spygate plot to prosecutions—are the DOJ and the courts, especially the Supreme Court.

Why a New Attorney General for Prosecution Phase?

The real battlefield has never been in the news media. The losing side picked the wrong battlefield. All the leaking in the world to The Washington Post or The New York Times won’t change the outcome now.

Trump is getting ready to make two key moves on this battlefield as he prepares for the fight: The first is a new Attorney General for the prosecution phase. The second key move will involve the courts.

There was simply no way Sessions could stay in charge of the DOJ investigations of people who had targeted him as a Russian agent and tried to “prove” he colluded with Russians. His recusal was absolutely necessary and people who dispute this are simply wrong.

Likewise, before it came time for the prosecutions of those plotters who targeted Sessions, he was going to have to step down as attorney general, because he was going to be called as a witness in the prosecutions. A sitting attorney general can’t be a witness in a case his own Justice Department is prosecuting. (Explaining the obvious is just another free service that I provide.)

William Barr is coming in now to take over the next phase, while Sessions is free to appear as a witness and testify about what McCabe and the other plotters told him at the time they were trying to entrap him.

Do you know who would also have to leave his current job at the DOJ to be a witness in these prosecutions? Because like Sessions, he’s involved a lot of this as a witness? Rod Rosenstein.

Of course, we’ve been given cover stories. “Sessions is resigning because at long last Trump has had enough of this incompetent bumbling idiot who’s been doing nothing!” and “Rosenstein is leaving because Barr wants to bring in his own team.” Most people don’t question the cover stories because they fit their biases.

The result is a new “commander” at the DOJ for the next phase of the “battle.” And when it goes to the courts, as much of it invariably will, that’s where Trump has been making numerous changes with dozens of judicial appointments.

Trump plays the long game. While many people chafe impatiently for the prosecution phase to start, he knows that’s well in hand, and so his eyes are already fixed two moves ahead: the Court phase.

The use of “lawfare” has served the Democrats well in thwarting some of Trump’s initiatives, but it’s not like he hasn’t been working tirelessly, with the aid of congressional Republicans, to take this advantage away from them. In just two years in office, Trump’s already made far more judicial appointments than any other president: 85 federal judges appointed in just two years compared to Barack Obama’s eight-year total of 65 and George W. Bush’s total of 100.

Since John Roberts appears to view his role as Chief Justice as being the neutral arbiter between the left and right wings of the court and to prove how unbiased he is, he’ll often throw his vote to the left wing, Trump knows he needs that additional conservative vote after Justice Ruth Bader Ginsburg’s forthcoming departure.

Ginsburg’s declining health, her recent second fall during which she injured herself by breaking three ribs (she fell and broke two ribs in 2012), and the recent cancer surgery all point to the fact that her long and illustrious career is nearing its end. The White House has already begun preparing for the eventuality of Ginsburg’s retirement. That means yet another hotly contested Supreme Court nomination, very likely before the end of this year.

When you know you are winning, when your enemy is almost surrounded, when their position is growing weaker and weaker, and you are holding the winning cards, there’s no need to rush everything as you prepare. People claiming Trump needs urgency and to move quickly right now as if Trump’s in any real danger are misreading what’s actually happening.

When the battlefield is fully prepared and all the pieces are fully in place for total and complete overwhelming victory, we’ll see it all come out into the open as the final battle begins. Until then?

Patience is a virtue. Try to develop some.