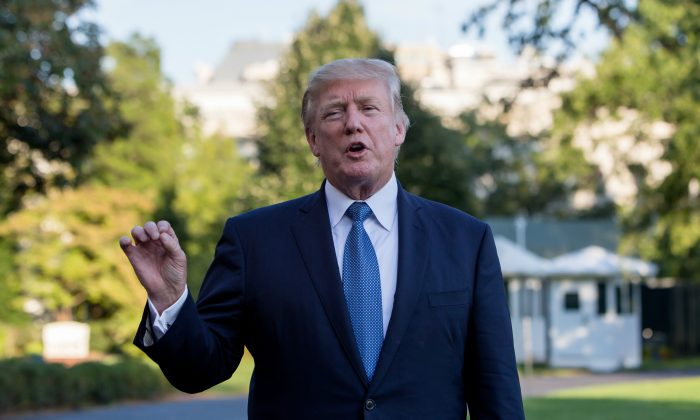 President Donald Trump addresses the media after arriving on the South Lawn of the White House in Washington, D.C., on Sept. 24, 2017. (Samira Bouaou/The Epoch Times)
Politics

President Donald Trump said that a story published by CNN about the NFL controversy is a “total lie.”

The story by CNN cited two unnamed officials claiming that White House Chief of Staff General John Kelly did not agree with the president’s comments about NFL players refusing to stand for the national anthem.

Trump called out NFL players’ refusal to stand for the national anthem in a speech in Alabama on Friday Sept. 22, calling on NFL owners to fire those who “disrespect our flag.”

A story published by CNN on its website on Monday, Sept. 25, said that Kelly was “displeased” with the “fight” between Trump and the NFL.

However, the story contradicts itself when it cites an interview with Kelly in which he echoes the comments made by Trump.

“I believe every American, when the national anthem is played, should cover their hearts and think about all the men and women who have been maimed and killed,” Kelly said. “Every American should stand up and think for three lousy minutes.”

Kelly is a four-star Marine general who who served in the military for over four decades. When Kelly retired in 2016, he was recognized in congress and praised as “a great American and fearless leader of Marines.”

Kelly experienced the tragedy of war first-hand when his son, Marine First Lieutenant Robert Kelly, was killed in action in Sangin, Afghanistan, in 2010.

Trump wrote on twitter that “General John Kelly totally agrees w/ my stance on NFL players and the fact that they should not be disrespecting our FLAG or GREAT COUNTRY!”

General John Kelly totally agrees w/ my stance on NFL players and the fact that they should not be disrespecting our FLAG or GREAT COUNTRY!

He also described CNN as fake news and said that the story about General Kelly was a “total lie.”

Also on Tuesday, the President called on the NFL to set a rule that players can’t kneel during the national anthem. Hundreds of NFL players and staff kneeled during the national anthem over the weekend in response to Trump’s comments. Fans across the country have responded with outrage, booing the athletes in stadiums and posting videos to social media showing them burning their NFL memorabilia.

It is not the first time that CNN finds itself in hot water over its coverage of the Trump presidency. In June, the network retracted a story that had claimed that a friend of Trump, Anthony Scaramucci, had ties to a Russian investment fund.

CNN retracted the story after Scaramucci threatened legal action over the false story. Three CNN journalists belonging to its investigative unit were forced to leave the company as a result.