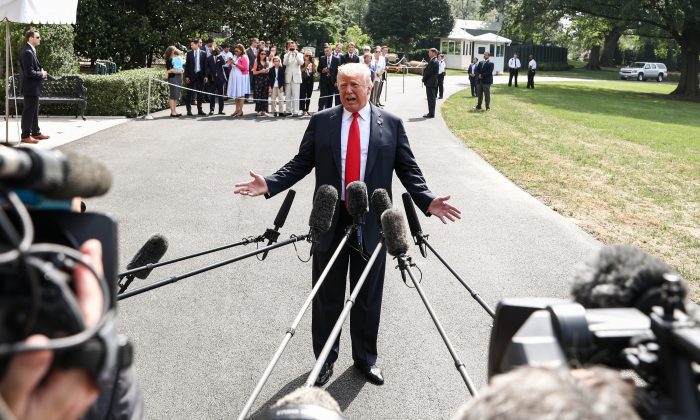 President Donald Trump talks to the media before leaving to Bedminster, N.J., at the White House in Washington on Aug. 17, 2018. (Samira Bouaou/The Epoch Times)
Viewpoints

On Oct. 23, amid its usual browbeating of the Trump administration and Republicans to stop using supposedly violent political rhetoric to incite actual violence against top Democratic lawmakers and members of the news media, the New York Times Book Review published this article, titled “Five Novelists Imagine Trump’s Next Chapter.”

To get an idea of how these five brief fictional stories went, author Scott Turow starts with a fun contribution called “The Pen,” in which a crestfallen President Donald Trump resigns from office after special counsel Robert Mueller has successfully built an impeachment case against him. In this predictive account, every single fantasy of the Trump-Russia election collusion narrative has come true. The Trump campaign colluded, Mueller found the evidence, and so, Trump is forced to issue pardons and resign and negotiate deals to keep himself and family members such as Donald Trump Jr. out of prison.

The next story contributed by Zoe Sharp, titled “How It Ends,” is the one that has garnered the most attention, for reasons that become quite evident upon reading it. This short segment postulates that Trump was selected to be president by the highest levels of the Russian government, so he must be killed before this can be divulged. This fantasy prediction also sees Trump mired in impeachment proceedings, and spends a few paragraphs describing the way the Russian assassin gets into position for his attempt, only to have his gun misfire at the very last second. The story ends with a member of the president’s Secret Service security detail offering the assassin his own handgun.

Naturally, the actual Secret Service wasn’t too pleased with that, even if it is only a progressive liberal fantasy published as a short story in the New York Times Book Review.

“While we understand this is a work of fiction, the insinuation that the U.S. Secret Service would participate in the assassination of a president is outrageous and an insult to the men and women of this agency,” a Secret Service spokesperson told Fox News.

The spokesperson continued by saying, “The U.S. Secret Service prides itself on being an apolitical agency with a long and distinguished history of protecting our nation’s elected officials.”

The New York Times defended the publishing of the short story. “It’s very clear what this is: a work of fiction, commissioned by editors of the Book Review as part of a package of five stories penned by a range of spy and crime novelists—in the Halloween edition,” a Times spokesperson told Fox News.

This response from The New York Times ignores the fact that the Secret Service was very well aware that it was fiction, and was questioning the editorial judgment behind publishing such inflammatory rhetoric.

Let’s be clear what the Democrats and their media shills are attempting to do here. They are seeking to enforce a double standard, where actual and real violent rhetoric from the left is excused or ignored, while stridently claiming all of Trump and the GOP’s criticisms leveled at them are “dog whistles” that encourage Trump supporters to physically seek to harm political opponents.

Nobody better understood the practical value of an enforced double standard more than a certain Marxist community organizer from Chicago. No, not that one. I’m referring to Saul Alinsky, whose book “Rules for Radicals” is still heavily used by the American left to formulate political strategies.

Alinsky’s fourth rule for radicals is “make the enemy live up to its own book of rules.” The flip side of that, of course, is that the radicals don’t have to live up to any rules at all. This way you can constantly keep the other side on the defensive.

That’s why you see progressive leftists in politics, in the news media, or in academia pull this amazing trick over and over, constantly forcing their political opponents to live up to cultural and social and legal rules that they themselves ignore. It took Trump to show the GOP and conservatives how to turn this tactic back on people who make constant use of it.

“We can say this kind of stuff, but you people can’t!” only works if you are the sort of person who the usual politically correct browbeating can force into submission. Leftists have spent the past three years slowly ramping up this tactic against Trump, and failing miserably with it because Trump simply refuses to respond as he is supposed to. The president refuses to be browbeaten into anything, especially by the “fake news media.”

Instead of apologizing, retreating, or being defensive, Trump constantly goes on the attack, turning the tables on his accusers. And it’s not just Trump. Plenty of Americans are waking up to the fact that they can challenge these entrenched double standards and force the left to do the retreating.

Here’s just one example: The Tree of Life synagogue mass murderer in Pittsburgh posted vile anti-Semitic messages on the Gab social-media platform. Tech companies such as PayPal and the services hosting the website reacted by withdrawing all their services, essentially taking Gab out of existence. And there was much backslapping and high-fiving throughout the land, because, of course, anti-Semitism can’t be allowed on a social-media platform, right?

Well, as it so happens, Louis Farrakhan, the head of the Nation of Islam, has been posting anti-Semitic messages on Twitter for years. Trump’s supporters have noticed, and are calling for the same tech companies that de-platformed Gab to live up to their own rules by de-platforming Twitter.

The Alinsky disciples of the left aren’t used to having their own attacks flipped around on them. “Well, you said you don’t like anti-Semitism and that no social-media platform can excuse posting such messages … so when are you taking action against Twitter for leaving all of Farrakhan’s anti-Semitic posts up?” one might ask.

With Trump leading the way, the left is being robbed of one of its most potent weapons: the ability to enforce politically correct double standards. That’s the main reason that Democrats and their media allies have gone all in on these absurd “dog whistling” claims. Trump is expertly flipping all their attacks back on them and they have no answers.