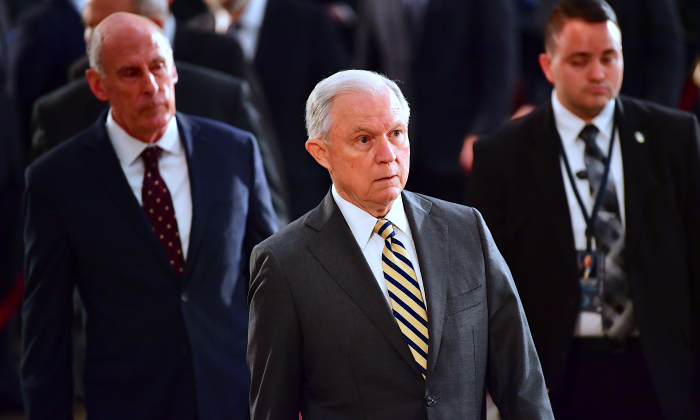 There is a marked contrast between several teams of prosecutors currently at work in Washington and elsewhere. One team of investigators has been leaking constantly. The other teams have been quiet, only saying something publicly when they are ready to indict someone or hand evidence that they’ve found over to Congress.

For the past year and a half, members of special counsel Robert Muller’s investigative team have been constantly turning to media contacts to anonymously leak details of their probe of the president and his allies. All of these leaks have gotten wall-to-wall, breathless coverage by both newspaper and broadcast news networks.

Reporters and news organizations compete with each other to hype the often vague, contradictory leaks—many of which are subsequently proven to be false. Or, as the current president prefers to put it, “Fake news!”

Many officials inside of President Barack Obama’s weaponized federal government spent years perfecting the art of what I refer to as “strategic leaking.” A strategic leak is when a highly placed government official leaks classified or privileged information to the media to obtain a specific politicized outcome. During the course of the past 2 1/2 years, strategic leaking has been used to target, for instance, Gen. Michael Flynn and Trump campaign advisers Carter Page and George Papadopoulos.

A lot of what is currently being referred to as “SpyGate” revolves around government officials using anonymous leaks to place these men under suspicion, so that the FBI and other federal agencies could then act to launch investigations based on the media reports for which these selfsame officials were the anonymous sources.

The circular nature of this activity is obvious, and it’s one of the reasons that SpyGate is such a growing scandal, as more evidence of these kinds of leaks are made public.

In stark contrast to the Mueller special counsel team and the strategic leakers at the FBI are the federal investigators and prosecutors that I like to refer to as the Silent Professionals.

Far from seeking constant attention and leaking to drive media narratives that can be weaponized against specific targets, these silent professionals just go about their jobs in the shadows. You don’t even know they are there, and that’s what makes them so lethal.

It was revealed in a huge bombshell report on Sept. 6 in the Washington Post that for at least the past six months, U.S. attorneys have been preparing to prosecute former Deputy FBI Director Andrew McCabe by presenting evidence and calling witnesses before a federal grand jury. That caused a furor for exactly five whole minutes before all the usual suspects instantly dismissed this news as meaning exactly nothing. This reaction to the bombshell is dumb.

Washington has a leak culture. It is nothing short of astounding that someone of McCabe’s stature could be the subject of a federal prosecution using a grand jury for more than six months, and the investigation didn’t leak. Highly motivated journalists in Washington have had their ears to the ground for over a year listening for the slightest whisper of just such a thing as a McCabe grand jury.

And, somehow, a grand jury was convened and federal prosecutors have been showing that grand jury evidence for over six months and not one of these journalists heard a thing about it.

We all need to stop and pause for a moment and marvel at the sheer professionalism of the federal prosecutors quietly doing their jobs behind the scenes, without fanfare or public attention. The Mueller special counsel team should try following this example.

All those media people wailing “nothing’s happening” for the past year are wrong. Plenty is happening. It’s just that the people making things happen aren’t ready to tell you or their targets about what they’ve found and what they’ve really been doing just yet.

Imagine how much heat from TV pundits and radio hosts that Attorney General Jeff Sessions and Deputy Attorney General Rod Rosenstein could have saved themselves if only they’d told everybody in March that McCabe was the subject of a grand jury investigation. Instead, as media hysteria was kept at a fever pitch, often by media that considers itself pro-Trump, they kept quiet about it. Does this not tell you anything?

As I wrote in an earlier column, every single top person in the Trump administration came into office after the inauguration in January 2017 knowing what they faced in the SpyGate plot. Trump knew, Sessions knew, Rosenstein knew, and so did Mike Pompeo. The narrative that Trump and his team came into office clueless about the SpyGate plot is, quite simply, nonsense.

Trump and his team came up with a plan to counter SpyGate that involved a lot of deception and stealth investigations. No matter what you think about that plan, or how you feel about it, whether you think the strategy is right or wrong, Trump had his reasons for doing things this way.

As Lee Smith has been pointing out in his own excellent way, nobody can stop Trump from declassifying all the FISA warrants on Carter Page or any of these other SpyGate-related documents. So if he’s waiting and biding his time, he has his own good reasons for doing so.

In the end, it comes down to whether you trust Trump or not, that he knows what he’s doing.