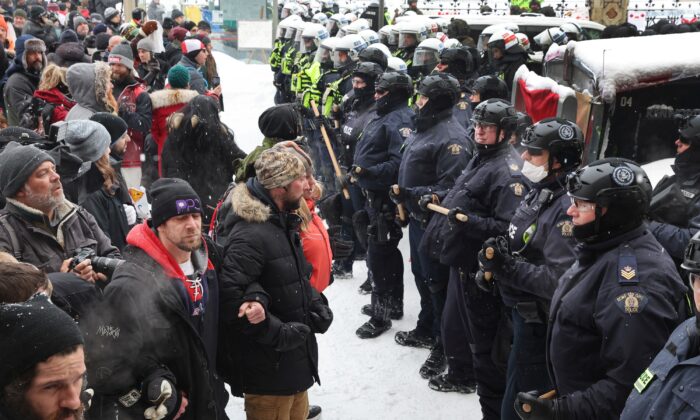 While Prime Minister Trudeau often doesn’t appear to hold much regard for the views of Canadians, he is always very concerned about what the world outside of Canada thinks of him.

Trudeau invoked the Emergencies Act two days after the meetings.

Slowly but surely, evidence is emerging that the government didn’t need to go as far as invoking the Emergencies Act to clear out the Ottawa protests this winter. It has been revealed that police forces never asked for the act to be implemented and negotiations between the City of Ottawa and the protesters were on the verge of a potential breakthrough in ending the demonstration. Despite having this knowledge in hand, the government still insisted on using the Emergencies Act.

That leads to questions about the motivations of the prime minister behind using such a blunt-force tool against a peaceful protest. How much did his pride and desire to be respected by international leaders drive him to rush through in imposing such a heavy-handed piece of legislation when it may not have been needed?

Justin Trudeau has always desperately wanted to be taken seriously on the international scene but has had little success with it.

One of Trudeau’s first major international meetings as Canada’s new prime minister was the “Three Amigos Summit” with then-U.S. president Barack Obama and then-Mexican president Enrique Peña Nieto. While the Mexican and American leaders discussed important North American issues, Trudeau’s most visible contribution was his attempt to initiate a three-way handshake for a photo op that led to an awkward and embarrassing moment for the leaders. That set the tone for Trudeau’s subsequent appearances at international summits.

While international leaders were happy to pose for pictures with Canada’s dashing young prime minister, they often delegated him to the virtual kiddy table at summits. Pictures and videos of Trudeau being snubbed or morosely wandering about alone during breaks at high-level meetings while other leaders were engrossed in private conversations became commonplace at international gatherings.

In an effort to gain international affirmation, Trudeau impulsively committed $50 million Canadian tax dollars to a cause in a fawning tweet directed at South African comedian Trevor Noah. In an embarrassing hot-mic moment, he was caught gossiping about former president Donald Trump at a NATO summit with other leaders in a mocking and juvenile manner. This didn’t exactly instil confidence among leaders in Trudeau’s capability for discretion with international issues. And who can forget his now infamous 2018 trip to India?

Trudeau spent four years, millions of tax dollars, and immeasurable political capital in a futile attempt to win a U.N. security council seat. He even put on a special Celine Dion concert in New York City to try and woo diplomats into supporting his bid. He relied on showmanship rather than policy to win the support of foreign leaders, and it failed dismally. Norway and Ireland beat Canada out for the position. The U.N. simply couldn’t take Trudeau seriously.

The embarrassment surely ran deep for the prime minister when he found himself being questioned by foreign leaders on his ability to maintain control of Ottawa and Canada’s borders. President Biden was concerned with cross-border trade while leaders in other nations were worried that the protests in Ottawa could inspire similar movements in their own backyards. Trudeau must have felt pressured to resolve the protest quickly.

If the prime minister felt forced to bring up foreign inquiries while making the case for invoking the Emergencies Act, one can imagine there was at least some resistance within cabinet to making such a controversial move. Trudeau had to make a case for using the act.

The public inquiry into the use of the Emergencies Act is set to begin on Sept. 19. The language coming from commissioner Justice Rouleau sounds promising: “One of the Commission’s primary responsibilities is to hold the Government of Canada to account for its decision to declare a public order emergency under the Emergencies Act.”

Perhaps more detailed documents will be compelled to be released.

The government is going to have a hard time justifying its use of the act under the rigorous scrutiny of the inquiry.

So far, it appears that some of the prime motivators in suspending civil rights to contain the convoy protests weren’t public safety and order but were the prime minister’s pride and concerns with what foreign leaders may think of him.

Civil liberties should never be suspended for the sake of the ego of a politician.