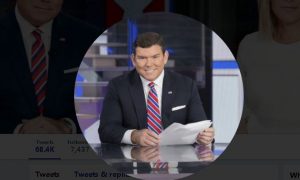 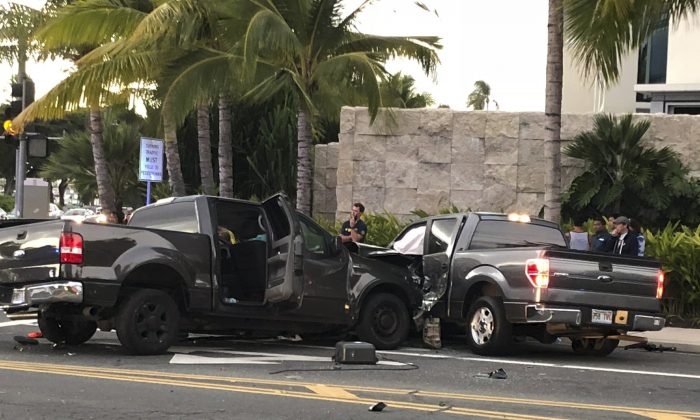 In this photo taken Monday, Jan. 28, 2019, is the scene of a multiple vehicle accident involving two trucks and a bicyclist in Honolulu. (Cindy Ellen Russell/Honolulu Star-Advertiser via AP)
US News

“This is probably our most deadliest in many, many years,” Ballard said of Jan. 28 evening’s crash.

About 6:10 p.m. local time, an officer was flagged down after a hit-and-run. The officer spotted the pickup and followed it. The officer lost sight of the speeding and weaving truck at one point, Ballard said, and then spotted it again. As the truck approached busy Ala Moana Boulevard, it veered across three lanes, climbed a traffic island, hit six pedestrians and a pole and then plowed into another pickup truck, Ballard said.

Speed and alcohol appeared to be factors, she said.

Two men and a woman were pronounced dead at the scene. Three people, including the driver of the other truck, remained in critical condition Jan. 30. One man was treated and released.

The suspect, 26, was under arrest while hospitalized and was expected to be booked on three counts of manslaughter, Ballard said. He has three prior convictions, including one for felony terroristic threatening, she said.

Ballard said she happened to be in the area for a function when the crashed happened and went to the scene to check on how officers were holding up.

“Everybody was shaken up,” she said.

The department plans to step up drunken-driving enforcement, she said.

The Hawaiian Rum That’s Made From an Ancient Energy Drink

Energy drinks may seem like a recent innovation to hit grocery and convenience store shelves, but they were also a staple of warriors in late 18th century Hawaii. And now, the source of that age-old energy drink—sugarcane—is being used by an Aloha state-based distillery to make KōHana Hawaiian Agricole Rum.

The journey started on a canoe about 1,000 years ago, and ends in a bottle of rum today.

The Food of Warriors

“Canoe crops” is the blanket term used to describe plants brought over by the Polynesians who first settled Hawaii, including staples such as breadfruit (a starchy food that grows on trees and is often cooked and mashed), sweet potato, and sugarcane. The nutrient-rich sugarcane plant, kō, was especially important.

“Calorically, it’s one of the highest calorie crops because it’s filled with sugar,” explained Kyle Reutner, brand manager for Oahu-based KōHana Distillers. “From an energy standpoint, it’s quite literally one of the [densest] foods you can find.”

Today, visitors to the distillery are given samples of juice machine-pressed from the soft, chewable sugarcane. In the late 18th century, the plant was a critical food for warriors who were fighting to unite the Hawaiian islands under King Kamehameha, including a battle to take over Maui, and the defeat of King Kalanikūpule of Oahu. According to Reutner, Kamehameha’s men would plant these crops along warring routes, providing them with sugar, water, and calories.

The uses of sugarcane also went beyond fuel for Hawaiians, Reutner added. Before missionaries came to the island and suppressed Hawaiian rituals like the hula, sugarcane was used for what Reutner said can best be described as “dark arts.”

KōHana grows 34 genetically unique sugarcane varietals on its 30-acre farm; in pre-missionary Hawaii, different varietals were used in ceremonies. One cane was thought to help infatuate a lover. Another could bring a loved one back home. “These powerful love potions can be seen as slightly cheesy now, but there’s a depth to it that I think is beautiful and [has] been lost to time,” Reutner said.

Lee Breslouer contributed to this article