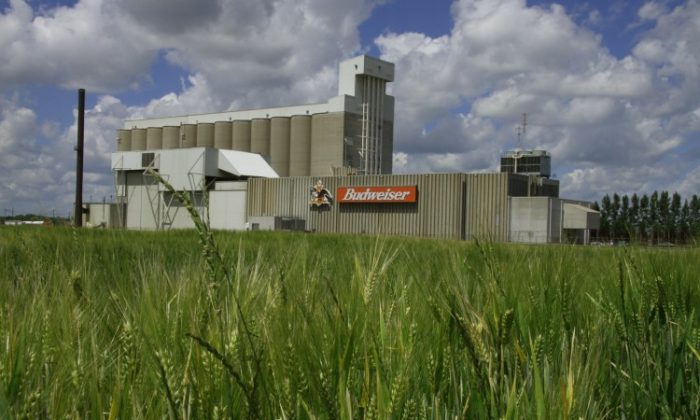 The Busch Agricultural Research facility in Fargo, North Dakota. The Oglala Sioux Tribe at Pine Ridge reservation is some of the largest beer manufacturers, including Anheuser-Busch, Miller, and Molson Coorsfor $500 million in damages. (Karen Bleier/AFP/Getty Images)
US

Near the site of the bloody massacre at Wounded Knee, a new lawsuit addresses an old problem. The Oglala Sioux Tribe at Pine Ridge reservation is suing local alcohol distributors, and some of the nation’s largest beer manufacturers—including Anheuser-Busch, Miller, and Molson Coors—for $500 million.

Alcohol has proven a devastating drug to the Lakota people, including the Oglala Sioux Tribe (OST), and alcohol related illness at Pine Ridge is many times higher than the national average. One in four children born at the reservation is diagnosed with either fetal alcohol syndrome or fetal alcohol spectrum disorder.

“The Oglala Sioux Tribe seeks compensation for all of the damages the Lakota people have suffered as a result of illegal alcohol sales,” said attorney Tom White at a press conference in Omaha, Neb.

White, a former Nebraska state senator and now legal counsel for the OST, said the entities profiting from beer sales knowingly prey upon the Oglala people, and actively assist in the illegal importation of alcohol onto the reservation.

Aside from a brief stint with legalization in the early 1970s, the sale and possession of alcohol has been outlawed at Pine Ridge since the South Dakota reservation was created. U.S. President Chester Arthur even decreed a 50-square-mile buffer zone around the area in 1882 to protect residents from exploitative whiskey merchants.

But despite Pine Ridge’s longtime, “dry” status, a drink isn’t hard to come by here. Several liquor stores in a neighboring Nebraska town are conveniently located just a few yards away from the nation’s second largest Native American reservation.

According to the 2008 documentary “The Battle for Whiteclay,” in 1904 the reservation’s buffer zone was diminished considerably and, despite strong protest from tribal leaders and local officials, nearly all of the White Clay Extension fell into the public domain, effectively opening the door to easy alcohol sales.

With a population of only about a dozen people, Whiteclay doesn’t have any schools, churches, or even local law enforcement, but it does sell a lot of beer, especially malt liquor. The drink is favored among the nearby OST for its low price and high alcohol content. Locals describe it as the crack cocaine of the reservation, and most of it comes from Whiteclay. The town has four liquor stores licensed by the state, which collectively sell about 12,500 cans a day.

The lawsuit accuses Whiteclay liquor stores of selling large quantities of alcoholic beverages to individuals who funnel it onto reservation for resale, and blames beer companies for supplying “volumes of beer far in excess of an amount that could be sold in compliance with the laws of the state.”

While state law prohibits the resale of alcohol purchased at retail outlets like those found in Whiteclay, the bootlegging scheme has been an open secret for decades. The lawsuit states that those who are in the business of making and distributing the alcohol sold in Whiteclay “actually knew or at the very least should have known of the facts described above for over 10 years.”

Over the years Whiteclay’s liquor loophole has seen protests, legislative hearings, a move to shut down the stores, and a federally funded program to train Pine Ridge officers to enforce the law on both sides of the border. But the problem has continued to worsen.

Now the poverty stricken OST wants help dealing with the financial burden that an exploited alcohol addiction has cost its community. They note the enormous strain the problem has placed on its social services, and say they are ill equipped to adequately care for their alcohol-ravaged population.

“The police, jails, and court systems of the OST are overwhelmed by crimes caused, in whole or in part, by the illegal transport, sale, and consumption of alcohol sold out of Whiteclay,” the lawsuit states. “The OST does not have the resources to properly address families, which have been torn apart by alcohol. There are not sufficient resources available to place children in safe homes. There is a shortage of beds for detoxification and treatment of alcohol addiction.”

While no one disputes that excessive alcohol consumption has poisoned Pine Ridge, some argue that drinking is a choice, and say the OST needs to take more responsibility for its actions. Critics contend that a lawsuit laying blame on big beer companies only serves as a frivolous publicity stunt. Beer makers contacted for a statement did not respond by press time.

But attorney White insists that both beer companies and local stores have failed to make reasonable efforts to ensure their products are lawfully distributed. “The illegal trade in alcohol could not occur without the knowing cooperation and assistance of every defendant in the chain of supply,” states the lawsuit.

“You cannot accept this kind of evil in your backyard without acting,” White told reporters in Omaha. “This is the biggest wrong done to the most people we’ve ever encountered, so doing nothing is not a choice.”