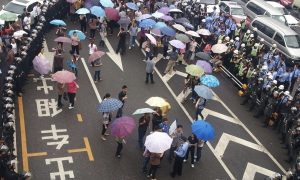 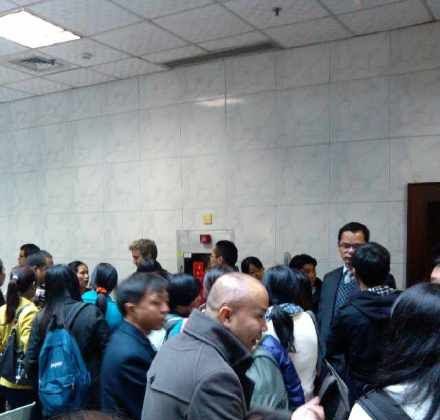 Witnesses and supporters of labor activist Wu Guijun wait outside the courtroom for his trial to open in Shenzhen, Guangzhou Province on Feb. 17, 2013. Wu's lawyer Pan Jun stands in the background behind the crowd in a suit and vest, with glasses. (Weibo.com)
China

The high-profile trial of a south China labor rights advocate Monday angered supporters and family when the prosecutor failed to show up, and the court first canceled the trial and then reopened it briefly.

Migrant worker Wu Guijun has been detained since May 23, 2013, and was finally indicted on Jan. 21 for organizing workers in a protest and petitioning the local government. The illegally extended detention caught the attention of the international community and other activists in China.

His long-awaited trial in Shenzhen, Guanzhou Province, turned into a farce however, as witnesses and about 50 supporters who waited outside the tiny courtroom at Bao’an District Court for the 2:30 p.m. trial were told that the assigned courtroom would be used for a different hearing.

The saga was covered by the Hong Kong-based China Labour Bulletin (CLB).

Over an hour later, the court told Wu’s wife, sister, and key witnesses that the trial would not be held that day after all.

Saying the “prosecutor couldn’t make his way to the court today,” court officials told them the trial would be rescheduled and the judge would speak with Wu’s wife in private.

Angry supporters stormed into the court’s petitioning office, shouting about the conduct of the court, said CLB.

“It is a hoax! Why do they have to make us wait for more than an hour? We demand an explanation!” one worker shouted.

“They have to tell us where the prosecutor is! Why can’t he be here? We—the taxpayers—are paying their salaries to work, not to be absent!” another said.

“I haven’t seen my husband since May 24, the day after he was detained, and I really looked forward to today!” Wu’s wife complained. “I don’t understand why they are so inefficient that they couldn’t even show up.”

Wu’s lawyers, Duan Yi and co-counsel Pang Kun, pressured the court to hear the case that day. Eventually the court agreed to bring in an interim prosecutor and transfer the hearing to a larger courtroom. They did not start until around 4:30 p.m., and the proceedings lasted for only an hour, and the prosecution did not call any witnesses.

Wu was elected by co-workers as a negotiator in a protracted and unproductive labor dispute with their furniture factory employers over severance pay when the factory planned to relocate. Workers had elected Wu and six others to negotiate with management for unpaid wages and to clarify the factory’s relocation and severance pay.

After a month of fruitless negotiations, the workers protested. Wu and 200 others were detained, and the authorities continued to hold only Wu on charges of “gathering a crowd to disrupt social order,” a charge, which is now commonly used to detain and imprison dissidents and activists in China.