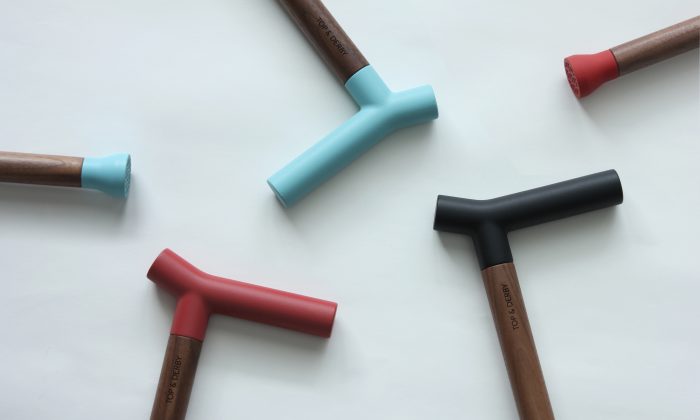 NEW YORK—Conventional wisdom tells us that people with disabilities do not have considerable spending power. People who rely on Social Security disability benefits are likely to have a meager income. Hence, companies that invest in products for the disabled might accept nominal returns in profit. Yet according to trends from the last few years, the disabilities market may be an untapped and promising one.

Liz Jackson, a buoyant woman of 33, saved up her money to purchase a $129 walnut hardwood cane with a turquoise silicon grip.

Three years ago, Jackson was diagnosed with idiopathic neuropathy, a nerve disorder that made walking difficult. She found herself suddenly needing a cane.

Jackson saw her condition less as a disability and more as a new beginning. “I had a new range of accessories that I can wear to craft my identity,” she said.

Since style had always been salient to Jackson’s identity, it was important for her to use a well-designed cane that gave off a “cool” vibe rather than an “infirm” one.

One of the nifty and comfortable canes that Jackson purchased was from a startup called Top & Derby. The company designs canes with an upward-turned silicon grip that provides extra comfort and allows one to rest the cane against a wall without it slipping. The startup also coats its canes with a satin finish.

In one month, Top & Derby received $21,945 worth of funding on crowdsource fundraiser site Indiegogo, revealing a demand for high quality and aesthetically pleasing products for people with disabilities.

Top & Derby is not the only company that saw a demand and acted on it.

In July, Nike released a shoe for athletes with disabilities called”Flyease,” which has zippers in lieu of traditional shoe laces.

Who Is in the Disabilities Market?

Nearly one in five people has a disability in the United States, according to the U.S. Census Bureau. Although that is a large number of people, it may be hard to fathom that people with disabilities have disposable incomes.

According to the U.S. Bureau of Labor Statistics, the unemployment rate for people with disabilities was 12.5 percent in 2014. That was around twice the number of those with no disability.

That, however, is a limited view of who makes up the disability market.

According to the Return on Disability Group, the disabilities market comprises a diverse group that varies from people who are aging, to people with developmental delays such as cerebral palsy, to people who are their friends and family members.

The Return on Disability Group is a New York-based economic research firm and index provider. Its CEO, Rich Donovan, has an MBA from Columbia Business School; Donovan has cerebral palsy too.

According to Donovan, the baby boomers population controls a larger share of the national wealth than prior generations. As they begin to lose their hearing, sight, and mobility, they are willing to spend on products such as a higher quality cane and clothing customized for wheelchair users.

The Future of Designing for Disability

For her senior thesis at Parsons School of Design, Lucy Jones designed a collection of clothing that enhanced the style and comfort for people who use wheelchairs.

She made adjustments such as adding extra fabric to the elbows since people who use wheelchairs are constantly resting their elbows on armrests.

She also noted how kneecaps changed shape when bent, so she removed extra fabric from pants that prevented pant legs from falling flat.

At the Fashion Institute of Technology, Luz Pascal, an assistant professor, has been teaching her senior classes to design with for a practical purpose for the last six years.

One of her students designed custom pants for disabled children who have trouble holding their bowel movements. The pants were made with textiles that dried quickly.

“There’s more to fashion than the runway,” Pascal said.

For instance, Siri’s voice recognition features were originally designed for people with disabilities.

Yet according to a report by Parks Associates, a market research and consulting company, 87 percent of iPhone 4 users said they used Siri at least once a month in 2012.

“Siri has since become a market-wide application that has since been picked up and copied by all mobile phone manufacturers,” a 2014 Return on Disability Group report called “Creating Value through Disability” stated.

Another example is the audiobook, which is a mainstream commodity that originated as a product for the blind.

“It’s not really about products,” Donovan said. “It’s more the mindset of innovation and making it mainstream.”