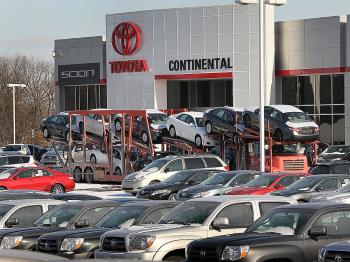 Toyota has announced a plan to repair of millions of vehicles with a defect in the accelerator pedal assembly. (Scott Olson/Getty Images)
US

By Conan Milner
biggersmaller
Print
Toyota Motor Corp. on Monday announced a solution to the recall of 2.3 million vehicles. Engineers have developed a fix to address sticking accelerator pedals found in eight of the automaker’s most popular models.

Toyota initially declared its intention to recall vehicles on Jan. 21 when affected models equipped with a specific pedal assembly was found to stick. Toyota's recent solution involves a small, precision-cut steel bar that reinforces the pedal assembly to eliminate the excess friction causing the problem.

The parts are already being shipped to dealerships across the country and dealers are being trained to properly install the piece.

Many Toyota dealers will be working extended hours to respond to the recall campaign as quickly as possible, with some staying open 24 hours a day. Meanwhile, the carmaker is halting production this week of affected vehicles.

“Stopping production is never an easy decision, but we are 100 percent confident it was the right decision. We know what’s causing the sticking accelerator pedals, and we know what we have to do to fix it. We also know it is most important to fix this problem in the cars on the road,” said president and chief operating officer of Toyota Motor Sales U.S., Jim Lentz in a press release.

If a driver experiences a sticking accelerator pedal, Toyota explains that the vehicle can be controlled with firm and steady application of the brakes, rather than pumping the breaks repeatedly which could deplete vacuum assist, requiring stronger brake pedal pressure. In these cases, the carmaker is instructing motorists to drive the vehicle to the nearest safe location, shut the engine shut off and contact a Toyota dealer for assistance.