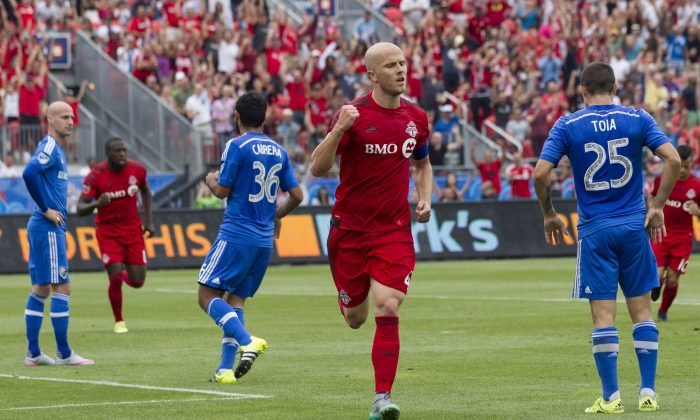 Toronto FC's Michael Bradley has a knack for scoring in 401 Derby games. His first-half goal helped TFC knock off the Montreal Impact on Aug. 29, 2015 at BMO Field in Toronto. (The Canadian Press/Chris Young)
Canadian Content

Klopas the biggest casualty of critical 401 Derby
By Rahul Vaidyanath

More importantly, it was a massive win for TFC that also sets back a playoff rival. The loss was also the straw that broke the camel’s back for Impact head coach Frank Klopas who was fired during the night after the game.

There’s always the pride factor underlying derbies, or games between close geographic rivals, and Montreal and Toronto don’t need anything additional to get geared up for each other. But in this case, the meeting comes as both teams have the realistic objective of qualifying for the MLS postseason.

“The derby’s always important, but for us at this moment in time, the three points are the most important thing,” TFC head coach Greg Vanney said in his postgame press conference. “The derby adds a little spice. For us, the mentality was 100 percent around getting the three points out of the game regardless of who the opponent was today.”

“We talked about it beforehand how much this game means for the fans, for the city, for the club, and we know that we have to give that much more,” said Jozy Altidore, who scored the game-winner. “Every game means something, but today for everybody that supports Toronto FC in Canada and abroad, this is a big victory for them.”

The 401 Derby, as it’s come to be known for the highway connecting the two big cities, features the classic rivalry between the colours red and blue. It may not have the history of the red against blue of Liverpool against Everton in the English Premier League, but with compelling storylines and fallout accumulating from each match, the rivalry is building nicely.

A sellout crowd of 30,266 came to see the game as the Canadian National Exhibition gave the surrounding area a festive atmosphere.

Obviously for us there’s added importance to games against Montreal.
— Michael Bradley

The Toronto–Montreal derby is an integral part of MLS’s Rivalry Week which includes the “California Clasico” between San Jose and L.A., a Cascadia Cup clash between Seattle and Portland, and, of course, New York Red Bulls and D.C. United battling for the Atlantic Cup.

“Get to this time of year and every game is big,” said TFC captain and player of the game Michael Bradley. “Obviously for us there’s added importance to games against Montreal.”

Teams Not at Their Best

The Impact limped into the game with a poor string of results including losing the Canadian Championship to Vancouver. They had been shut out in three of their last four games and had never won at BMO Field since joining MLS in 2012. Pressure was mounting on Klopas.

To make matters worse, Montreal was missing their best attacking threat in Ignacio Piatti as well as new designated player and former Chelsea star Didier Drogba. Toronto FC had a nearly full strength squad. On paper, it didn’t look promising for the Impact.

TFC was coming off a 5–0 thrashing of Orlando City, but prior to that had lost three out of four, conceding three goals in each of those losses.

The first half was one where Montreal more than held its own and should’ve scored two goals but for bad misses at the critical moments. Dominic Oduro, while scoring a late goal to make things unsettling for TFC, nevertheless had a nightmare of a game missing on two 1-on-1 chances against Chris Konopka and an open net.

“We should’ve been up one if not two,” Klopas said about the first half after the game.

The derby also had the requisite physical and sometimes violent play. TFC’s Collen Warner could have seen red for a harsh foul on Oduro after he raced past a stricken Bruno Cheyrou lying on the pitch. Montreal captain Laurent Ciman picked up two bookings and was sent off.

“It was an intense game and I think it’s great,” Klopas said. “Both teams want to win every game, but especially with the close proximity with Toronto. So it’s a good rivalry.”

Bradley Best on the Pitch

As he did in the teams’ earlier meeting this season, TFC captain Michael Bradley got his team on the board with a perfect one-touch side-footed finish after a pass from Canadian midfielder Jonathan Osorio in the 35th minute.

But the half really came down to Montreal’s poor finishing in front of net. Oduro was unable to scramble a ball over the line and Johan Venegas blasted the rebound well over the net from in close.

Both teams want to win every game, but especially with the close proximity with Toronto. So it’s a good rivalry.
— Frank Klopas

The hosts took control in the second half and a dazzling run by Bradley led to substitute Altidore’s goal. It was the big American striker’s third goal in two games from a substitute role and it looked like curtains for Montreal.

But to Montreal’s credit, after Ciman was sent off, they scraped one back, playing the role of wounded animal backed into a corner.

“We went down a man and I still felt that with 10 guys we were the better team,” Klopas said. “The team showed a lot of character. I was proud of the group.”

The Impact, but for its lack of finishing, did put forth a better-than-expected performance, but ultimately, it’s results that matter.

The two clubs face each other in the final game of the regular season at Stade Saputo in Montreal on Oct. 25.

If that game is to be relevant, Montreal, under new coach Mauro Biello, has to get better results than Klopas did recently. From the highs of reaching the Champions League final and playing in front of over 61,000 at Olympic Stadium, the regular season has gone pear-shaped and the difficult remaining schedule comes thick and fast.

Toronto FC did what it had to do, but can’t rely on opponents missing chances like the Impact did in the first half. Still, the Reds remain on track to reach the playoffs and potentially host a game therein.

“We want to position ourselves to get that home game and we want to play in front of our crowd and in front of this city because we know it’ll be a really exciting moment,” Vanney said.

That moment would be a long-awaited first too.