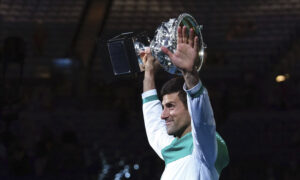 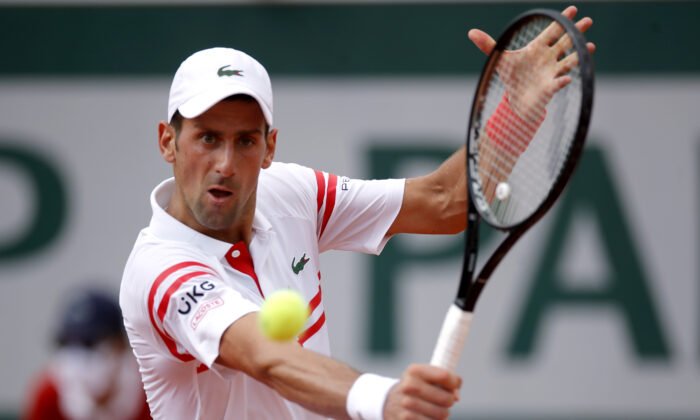 Serbia's Novak Djokovic is in action during his second round match against Uruguay's Pablo Cuevas during French Open at Roland Garros, Paris, on June 3, 2021. (Sarah Meyssonnier/Reuters)
Tennis

Top Seed Djokovic Strolls Into Third Round With Clinical Win

PARIS—World number one Novak Djokovic put on a clinical display to stroll past Uruguayan Pablo Cuevas 6–3 6–2 6–4 on Thursday and reach the third round of the French Open.

Cuevas, ranked 92nd, showed flashes of resistance against the 34-year-old Serbian but the top seed raised his game when he needed to and produced some sublime winners off his backhand to keep alive his chase for a 19th Grand Slam title.

Djokovic broke Cuevas’s serve a second time to go up 5–3 in the opening set but found himself 0–40 down on his own serve. The Serbian, however, grabbed the next five points to seal the lead on a sunlit Suzanne Lenglen court.

The 35-year-old Cuevas’s challenge fell away as Djokovic broke his opponent’s serve three more times to complete the win and set up a clash against Lithuania’s Ricardas Berankis, who beat Australian James Duckworth 7–5 2–6 7–6(4) 6–0.