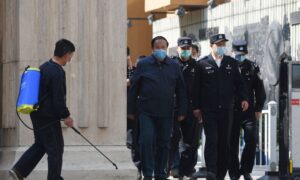 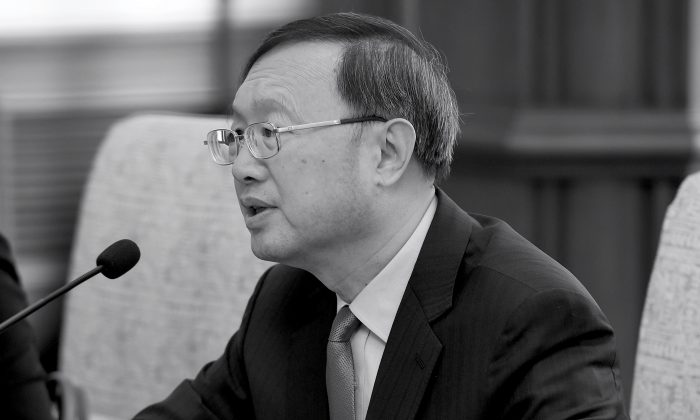 The Chinese regime announced its picks for vice premiers and heads of ministries on March 19, ending months of speculation about who will manage different portfolios in China’s state affairs.

One notable person missing from the list is senior diplomat Yang Jiechi, who was widely expected to become a vice premier given his appointment to the Politburo, a 25-member group of elite Party officials, at last October’s important Party conclave.

As Hong Kong newspaper Sing Tao Daily reported at the time, Yang was the first diplomat to make it into the Politburo in 15 years.

Given Yang’s ties to former Chinese Communist Party leader Jiang Zemin, his unusual appointment was seen as a sign that the Jiang faction was still holding strong within the regime’s foreign policy apparatus. The Jiang faction make up the opposition to current leader Xi Jinping and his allies.

With Yang a no-go for the vice premier spot, the Jiang faction may be further waning in power.

Notably, during the March 19 announcement, current foreign minister Wang Yi was named as a councilor to the State Council, a cabinet-like administrative authority. Yang is currently a state councilor, but because the Party is unlikely to install two staffers for handling foreign policy, Yang may find himself kicked out.

The pro-Beijing news website Duowei explained that with Wang Qishan in charge of diplomacy, there was no need for a vice premier to handle a foreign policy portfolio, suggesting Yang Jiechi had to make way for Wang Qishan, and will likely end up reporting to him.

Citing an insider source, Hong Kong-based South China Morning Post said Yang is likely to instead be appointed as head of a new body merging the Party’s International Liaison Department—in charge of relations with political parties in other countries—and the Office of the Central Leading Group on Foreign Affairs.

There were signs that Yang was out of favor. According to a report by South Korean media Yonhap News Agency, Yang was originally scheduled to visit South Korea upon the conclusion of the rubber-stamp legislature sessions on March 21, but the visit was abruptly postponed to March 28. Last month, Yang made a trip to the United States, and the visit did little to ease tensions, as the United States has continued to enact trade measures against China.

Yang also has a history of using his diplomatic position to promote the Party’s hate propaganda against the spiritual practice Falun Gong. In July 1999, former leader Jiang ordered that practitioners of the meditation discipline be detained, brainwashed, and tortured. The regime’s state media spread propaganda to turn public opinion against the practice.

In 2002, when U.S. adherents of Falun Gong filed a lawsuit against Jiang for genocide and crimes against humanity, Yang began reaching out to U.S. politicians, pressuring them not to voice public support for the case.

In an article published in September 2008 in Qiushi, the CCP’s political journal, Yang summed up his diplomatic achievements, mentioning his success in “preventing and containing Falun Gong.”

Sway Over the State Council

Following the March 19 appointments, the State Council’s economic core is also shaping up in Xi’s favor. All members are Xi allies, such as Liu He, vice premier and economic adviser; He Lifeng, chair of the National Development and Reform Commission, who worked under Xi when they were Fujian officials; and Zhong Shan, commerce minister, who worked with Xi in Zhejiang Province.

There were some unlikely choices, though. The justice minister is Fu Zhenghua, the former vice minister of public security who has an unsavory history of human rights crimes. Fu also does not have a legal background.

The World Organization to Investigate the Persecution of Falun Gong has named Fu as a perpetrator while serving as Beijing police chief and director of the 610 Office, an extralegal secret police force dedicated to carrying out the arrests and imprisonment of Falun Gong practitioners.

Sunny Chao and Gu Qing’er contributed to this report.