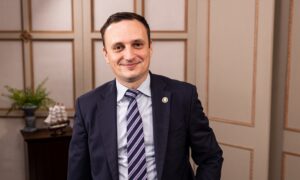 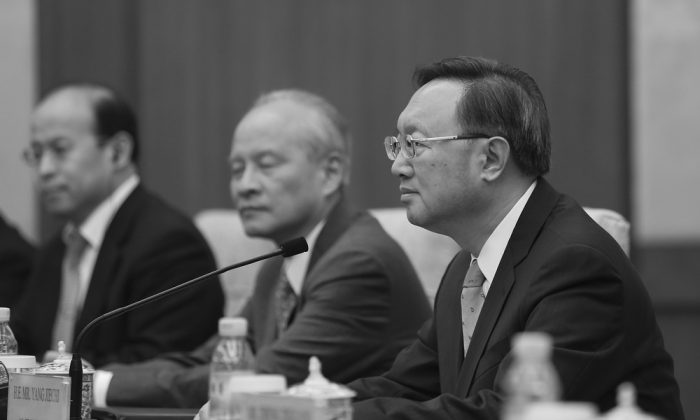 Yang Jiechi (R) during a meeting at Diaoyutai State Guesthouse in Beijing on March 18, 2017. Yang was promoted to the 25-member Politburo after the 19th National Congress. (Lintao Zhang/Pool/Getty Images)
Chinese Regime

Since the 19th National Congress concluded, Chinese leader Xi Jinping has been placing his allies in the Chinese Communist Party’s (CCP) top posts in different departments and ministries.

However, one official who has been loyal to the faction headed by former Party boss Jiang Zemin unexpectedly joined the regime’s most powerful figures when he was promoted to the 25-member Politburo. The appointment of diplomat Yang Jiechi may signal the continued strength of the Jiang faction in the foreign ministry, or may be due to Yang switching his loyalty to Xi’s camp.

Yang was Chinese ambassador to the United States between 2001 and 2005 and is the current director of the Foreign Affairs Leading Group Office in the State Council—an influential position that shapes China’s foreign policy. Yang also served as a diplomat in the United States in the mid-1980s and again in the early 1990s, when he served as minister of the Chinese Embassy in Washington.

Chinese media have widely speculated that after the CCP’s Two Sessions in March next year, Yang will be named one of the four vice premiers, given his extensive diplomatic pedigree.

The Two Sessions, known in Chinese as Lianghui, are the annual plenary meetings of the National People’s Congress, the Party’s rubber-stamp legislature, and the Chinese People’s Political Consultative Conference, which is an advisory body to the Party.

Candidates for the position of premier—which current premier and Xi ally Li Keqiang is expected to assume—and four vice premiers will be voted on by the National People’s Congress. This “election” process is a show, since those who will fill these roles are selected beforehand by Party leaders through horse-trading behind the scenes.

Through his anti-corruption campaign, Xi has been able to clean out many of his political enemies in the Jiang faction, allowing him to consolidate his rule within the CCP in the five years since he took power. But his influence outside of China’s mainland has been called into question.

For example, only now will Xi and his camp be able to exert their influence in Hong Kong and Macau, with the appointment of Xi’s confidant Li Zhanshu to the Politburo Standing Committee, the top decision-making body of the CCP. According to precedent, his position as the third-highest ranked member suggests he will oversee the two cities.

Yang, while working as Chinese ambassador to the United States, was at the forefront of extending the Chinese Communist Party agenda overseas, including Jiang’s persecution of the Falun Gong spiritual practice. In July 1999, Jiang ordered that practitioners of Falun Gong be detained, brainwashed, and tortured. The regime’s media outlets then spread propaganda to turn public opinion against the practice.

Yang supported this campaign. According to the World Organization to Investigate the Persecution of Falun Gong (WOIPFG), Yang publicly defamed Falun Gong during a luncheon hosted by the National Press Club in July 2001.

A year later, after adherents of Falun Gong filed a lawsuit in federal court against Jiang for genocide and crimes against humanity, Yang began reaching out to U.S. politicians, pressuring them not to voice public support for the case.

In an article published in September 2008 in Qiushi, the CCP’s political journal, Yang summed up his diplomatic achievements, mentioning his success in “preventing and containing Falun Gong.”

Yang doesn’t have a clean record either. In January 2014, Apple Daily reported that Yang tried to resign from his position at the State Council, admitting that he had allowed subordinates to illegally amass money. Yang’s reported resignation came on the heels of an article by the mainland liberal publication Southern Weekly, which revealed that more than 100 Chinese diplomats were involved in a pyramid scheme that illegally raised over 1.3 billion yuan (about $196 million).

Yang’s poor human rights record, and questionable financial dealings, have fueled speculation as to why he was promoted to the new leadership lineup.

His presence may signify that Jiang allies are still holding strong in the CCP’s foreign policy apparatus. Or the promotion may suggest his political allegiance has changed.

In July, just before the 19th National Congress, Yang praised Xi by calling on CCP members to “learn and implement deeply and thoroughly Xi Jinping’s diplomatic ideology,” according to a report by Taiwanese news media United Daily News.

To what extent Yang’s  expression of loyalty to Xi led to his new promotion is unclear.