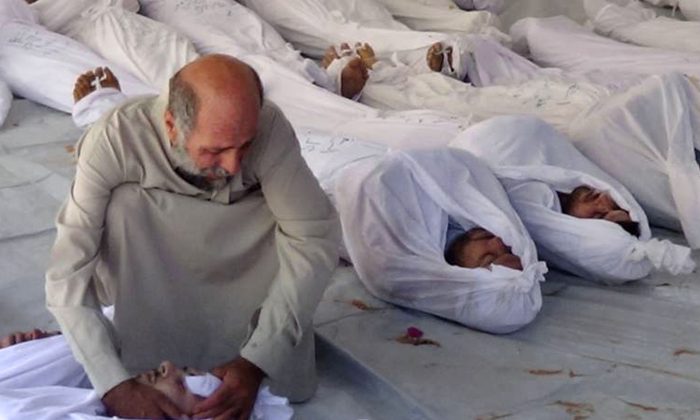 A Syrian man mourns over a dead body after a chemical attack by regime forces in the town of Duma, near Damascus, Syria, Aug. 21. (AP Photo/Media Office Of Douma City)
Middle East

In 2014 Syria will enter its fourth year of a bloody civil war that has already left 100,000 people dead.

The conflict, which started in March 2011, saw significant developments in 2013. On Aug. 21 the Syrian regime used chemical weapons from its vast arsenal to kill 1,425 people, including 426 children, in a suburb of the capital Damascus, according to estimates by the United States after an assessment of the situation.

The shocking scene, which was recorded by citizens on the ground, set off a flurry of political activity as Western countries struggled with how to respond.

A seemingly imminent U.S. military retaliation supported by President Barack Obama was averted when Russia brokered an agreement with Syria and the United States to destroy Syria’s chemical weapons stockpile by June 30, 2014.

Russia acted on a public remark made by U.S. Secretary of State John Kerry that retaliation could be avoided if Syria agreed to hand over its chemical weapons to international control, adding he did not expect it to happen.

The Organization for the Prohibition of Chemical Weapons, which won a Nobel Peace Prize in 2013 and is responsible for carrying out the monitoring and destruction of Syria’s chemical stockpiles, now faces the daunting task of transporting the chemical agents outside of Syria amid the raging civil war.

Destroying the weapons themselves will likely need to be done aboard a ship at sea, which the United States has volunteered, as no country has yet agreed to have the weapons destroyed on its soil.

Some of America’s closest allies in the region, such as Saudi Arabia, are outraged by U.S. and U.N. Security Council inaction on the Syrian civil war. They feel more needs to be done to support the rebels that are fighting Syrian President Bashar al-Assad. While Assad was increasingly weakened in 2013, he managed to regain momentum and has retaken control over some key areas.

The Syrian conflict is expected to become an increasingly regional conflict in 2014. Civil war violence is already seen as spilling beyond Syria’s borders.

On Nov. 19 this year a suicide bomber targeted the Iranian Embassy in Beirut, Lebanon, which killed 25 and injured 140. The attack was apparent retaliation for Hezbollah and its backer Iran sending troops to Syria to fight alongside Assad’s forces.

But perhaps the most significant—and constructive—in 2014 will be the start of peace talks between the Syrian authorities and the opposition. The talks set for Jan. 22 will be the first time the two sides directly negotiate.