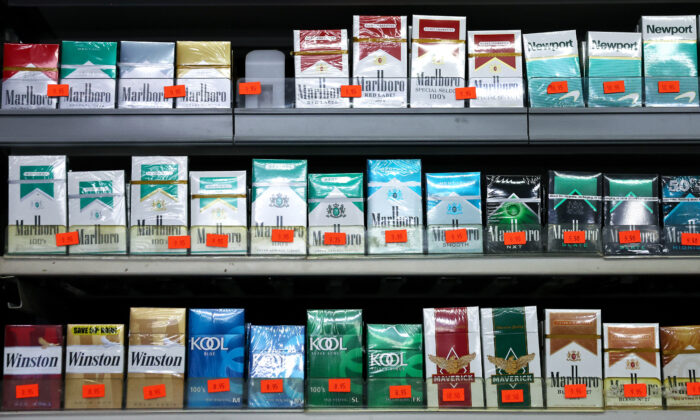 Packs of menthol-flavored and non-menthol cigarettes are displayed for sale in a smoke shop in Los Angeles, Calif., on April 28, 2022. (Mario Tama/Getty Images)
Health News

Tobacco smoking causes mental health disorders, according to a recent UK study. The study found smoking increased the risk of developing schizophrenia by 53 to 127 percent and can increase depression by 54 to 99 percent.

“There is no longer any doubt that smoking is bad for mental health, and this needs to be a priority,” said professor Marcus Munafo, co-author of the study.

The review (PDF), published by the University of Bristol on June 20, examined several studies on tobacco smoking and found that smoking had a causal relationship to the development of schizophrenia and depression.

The authors mainly focused on two recent studies that found that smoking increased the risk of depression, with greater risks for lifetime smokers than first-time smokers.

Researchers noted a stronger relationship between smoking and schizophrenia as opposed to depression. The same two studies found that smoking increased the risk of schizophrenia by an average of 53 and 97 percent, respectively.

However, lifetime smokers had a further increase in the risk of schizophrenia, with the 2019 study finding an average risk of 127 percent, with the maximum interval set at 208 percent.

The study also showed a high degree of bidirectionality between tobacco smoking and mental health conditions, meaning that depressed and schizophrenic individuals are more likely to take up smoking. People with mental health problems often have a higher rate of smoking than the general population.

In the UK and the United States, over a third of people with mental health disorders take up smoking compared to the 15 and 21 percent of the general population.

Although individuals with mental health problems comprise less than 20 percent of the population, they also take up over 30 percent of smokers, indicating a strong bidirectional relationship between smoking and mental health conditions.

Smoking cessation has also been linked to an improvement in mental health conditions, according to previous UK studies, though further research is needed to support this finding.

All these findings highlight the severe effect tobacco smoking has on an individual’s mental health.

While the overall review found a stronger relationship between smoking and developing schizophrenia, as opposed to depression, the researchers at the University of Bristol noted the possibility of cannabis playing a role in the relationship.

“Cannabis is often smoked with tobacco and there is strong evidence to suggest that high potency cannabis is associated with psychosis,” the authors wrote in their study.

“Given the high rates of co-use between tobacco and cannabis in many populations, it can be very difficult to disentangle their effects,” using various studies.

According to the authors, additional investigations are also needed to find the reason behind this causal relationship and possible implications with other mental health conditions.

The study was presented to the Royal College of Psychiatrists International Congress and has already been shared with the UK government, which is currently developing a new Tobacco Control Plan for publication in late 2022.