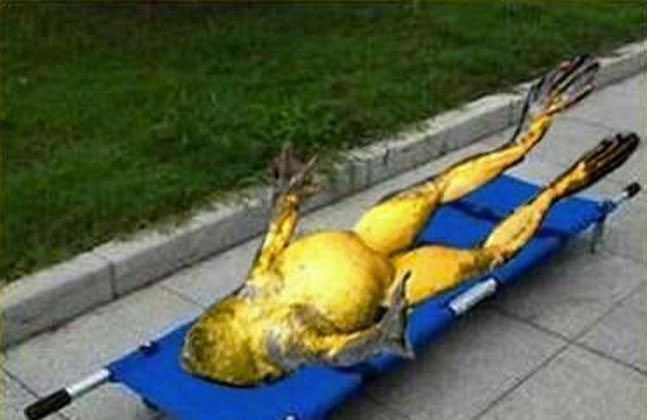 A Chinese netizen posted a photoshopped picture of a toad lying unconscious on a stretcher and speculated that Jiang is hospitalized for advanced cancer and nearly dead. (Weibo.com)
China

Since the end of July, when former security czar Zhou Yongkang was taken down in the ongoing “anti-corruption” campaign, speculation about former Chinese Communist Party leader Jiang Zemin’s precarious condition has been a hot topic among Chinese netizens. Jiang is said to be in bad health physically and politically, with analysts suggesting his turn to be arrested for corruption is coming.

Rumors online say the 88-year-old Jiang has recently been hospitalized for severe health problems, and due to their intense resentment of him, Chinese netizens are looking forward to his death. They have reasons for their ill will.

Jiang took part in suppressing the students who participated in the 1989 student movement, and ten years later he launched the persecution of the spiritual practice of Falun Gong. Millions of Falun Gong practitioners have been detained, where they are subjected to brainwashing, torture, and organ harvesting. According to researchers, tens of thousands have been killed.

Jiang is also notorious for having several mistresses, including a Chinese folk singer, Song Zuying, whom the Chinese people mock as the “state mother.”

The word “toad” has become synonymous with Jiang, because his face is said to resemble that of a toad. Also, netizens refer to Jiang as “toad” to avoid censorship; Jiang’s actual name would be blocked.

At this politically sensitive time during which Chinese are watching to see if the predictions of Jiang’s arrest will come true, discussions about the “toad” and toad images have gone viral on the Chinese internet, with many of the images implying Jiang’s death.

A photo of a frog standing on its knees in a praying posture is posted by Chinese netizens, implying that Jiang begs for mercy. (Screenshot/abolowang.com)

A photo of an inflated golden toad on the lake in Yuyuantan Park with six cannons on the lake bank pointing to the toad. Posted on Chinese social media, the photo implies the “toad” is under attack. (Weibo.com)

The inflated toad in Yuyuantan Park leaked after several days of exhibition this July, and many netizens pointed out that the “toad” has started falling down. (Weibo.com)

Another photo of the deflating golden toad in Yuyuantan Park. (Weibo.com)

A Chinese netizen posted a photoshopped picture of a toad lying unconscious on a stretcher and speculated that Jiang is hospitalized for advanced cancer and nearly dead. (Weibo.com)

A photo posted on Chinese social media shows a toad holding onto a red gold fish, implying Jiang’s sex scandals. A netizen wrote, “If the toad is gone, what would happen to the little mermaid?” (Weibo.com)

The state-run Yangcheng Evening News published an article about how Europe and America limit the abuse of antibiotics, with an image of a big sick toad with IV bottles. Many Chinese netizens believe the image sends a message about Jiang’s health. (Screenshot/Yangcheng Evening News)

Netizens even dug out an old photo from the state-run Xinhua news agency showing a dead toad floating in a river and speculated about rumors of Jiang’s death. (Weibo.com)