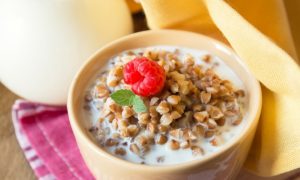 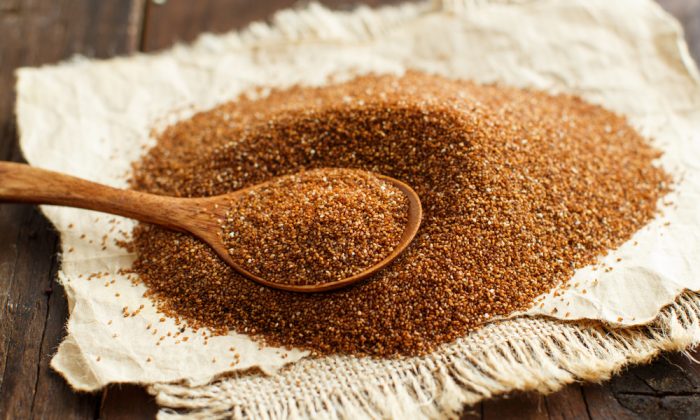 Have you seen the term “ancient grain” on food packaging or touted in commercials, and wondered what makes it different than other types of grains?

Modern wheat has been constantly bred and changed to adapt to growing conditions, to decrease crop cost, and to increase yield. On the other hand, ancient grains remain largely unchanged. And while “ancient grain” doesn’t have one universal definition, the Oldways Whole Grains Council, a non-proﬁt consumer advocacy group, generally defines ancient grains as those that have not been bred or changed for at least the last few hundred years.

Ancient grains like amaranth, freekeh, farro, and spelt offer many health benefits and are becoming increasingly commonplace in stores and on menus. Here, we want to highlight the ancient grain teff, what makes it special, how to use it, and its role in African food traditions.

Teff is an ancient grain that ranges in color from brown to ivory, and is so small—about 1/150 the size of a wheat kernel—that it is often compared to the size of a poppy seed. If you’ve ever tried to pick up a single poppy seed, you understand why teff is thought to have gotten its name from the Amharic word “teffa,” which means “lost.”

Teff kernels are so tiny that they are even difficult to refine (the process of removing the germ and the bran of the kernel, leaving only the endosperm). This means that teff is almost always consumed as a whole grain.

As a crop, teff is impressive. It can thrive where other crops cannot and it is dependable, sustainable, and fast-growing—it sprouts in under two days!

Whole grains play a significant role in nearly every traditional diet. In fact, grains are a staple all around the world.

The highest rates of whole grain consumption, though, are in Africa, where the most native grains originate. Because grains like teff are resistant to challenging weather and generally require less water than other crops, it makes sense they play such an essential role in the African Heritage Diet.

Teff is native to the Horn of Africa, and has been a staple of the Ethiopian diet for thousands of years. To this day, it is attributed with providing 70 percent of the calories in a standard Ethiopian diet.

If you’ve had Ethiopian food, you may be familiar with injera, the spongy, pancake-like, teff-based sourdough flatbread that is often topped with tasty wats (Ethiopian stews), curries, and salads. The injera soaks up the flavors of the food, and pieces of injera are used as a delicious alternative to utensils to scoop up food.

In addition to teff, Africa has its own species of rice, along with sorghum, fonio, millet, several varieties of wheat, and dozens of other wild grains and cereal crops.

Eating whole grains offers many health benefits, and teff is no different. About 20 to 40 percent of the carbohydrates in teff are estimated to be resistant starch, which is associated with weight management, colon health, reduced insulin resistance, and more.

Some grains, like quinoa, are “complete proteins,” which include adequate levels of the nine essential amino acids our bodies can only get through food. Though teff isn’t a complete protein, it contains six grams of protein per serving. It also contains high amounts of minerals—such as calcium, copper, manganese, phosphorous, and iron—and vitamins, including thiamin (B1) and vitamin C.

How to Use Teff

Teff is naturally gluten-free, and has a wonderfully earthy, nutty taste. Its versatility and flavor make it a newfound favorite for many home cooks and bakers experimenting with whole grain recipes.

In its intact kernel form, teff can be made into porridge and topped with fruit and nuts. It can also be used in soups or stews, or as the base for savory dishes (as you might use polenta). It pairs well with umami flavors, hearty vegetables like mushrooms, and tubers like sweet potatoes.

Teff flour, meanwhile, can be used in all kinds of baked goods and breads, including injera. When used for baking, it takes on subtle hints of cocoa, which works particularly well with chocolate and fruit.

A simple way to cook teff is to toast one cup of grains in a dry sauté pan on medium high heat for three to four minutes, to enhance their nutty flavor, before adding three cups of water to the pan of toasted teff. Bring it to a boil, and then simmer for 15 to 20 minutes. This yields three cups of cooked teff, which can be used as hot cereal or as a healthy and hearty alternative to rice, noodles, or potatoes.

To find teff and get started on your next cooking adventure, look for it in pound-size bags near other grains in your grocery or health food store, or shop for it online.

Teﬀ lends a pleasing crunch and delicious, nutty ﬂavor to these fruit-and-nut energy bites. Pack for your next day trip, hike, or on-the-go snack!

To toast the teﬀ grains, spread them out on an ungreased baking sheet and bake for 20 minutes, stirring periodically. (Alternatively, place the grains in a dry skillet over medium heat for 5 minutes, stirring frequently until fragrant and toasted.)

In a food processor ﬁtted with a steel blade, add the dates, 1/2 cup cashews, cocoa powder, salt, and cinnamon. Process until a smooth paste forms.

Roughly chop the remaining 1/4 cup cashews and the coconut chips.

Stir the cashews, coconut, and toasted teﬀ grains into the date-cashew mixture.

Roll into bite-size balls, approximately 1/2 inch in diameter. Store in an airtight container at room temperature, or in the fridge.

Oldways is a food and nutrition nonprofit dedicated to improving public health by inspiring individuals and organizations to embrace the healthy, sustainable joys of the “old ways” of eating—heritage­ based diets high in taste, nourishment, sustainability, and joy.