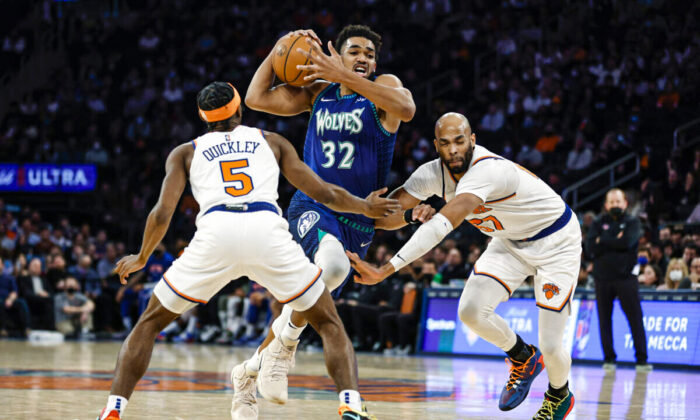 Karl-Anthony Towns #32 of the Minnesota Timberwolves dribbles as Immanuel Quickley #5 and Taj Gibson #67 of the New York Knicks defend during the first half at Madison Square Garden, in New York City, on January 18, 2022. (Sarah Stier/Getty Images)
NBA

Timberwolves Recover to Edge out Knicks 112–110

The Minnesota Timberwolves gave up a 12-point lead to rally late and edge out the home New York Knicks 112–110 at Madison Square Garden on Tuesday night.

The Timberwolves have won six of the last eight games and are 18–11 when the trio of Karl-Anthony Townes, Anthony Edwards, and D’Angelo Russell are together. They forced 18 turnovers for the game, and set a NBA record of 10 or more turnovers for 40 straight games.

Edwards led Minnesota with 21 points on eight of 17 shooting, three assists, and three rebounds. He scored 11 in the first quarter to give the Timberwolves a 30–23 advantage and has scored 25 or more in the last four games.

“We really just wanted to come out with the win no matter what,” said Edwards. “That was our main goal because we got back-to-back [games], and these are big time wins.”

“I told my dad everyone’s going to get a chance to have their Madison Square Garden moment and I felt that was for me tonight,” said Towns. “That was the biggest moment that I’ve had in MSG. Great crowd, great atmosphere, great energy, and I got to silence everybody, so that makes it even better.”

Other Timberwolves of note were Russell scoring 17, Jaylen Nowell with 14, and Malik Beasley with 10 points.

The lead would extend to 61–51 at halftime. But the Knicks rallied to score 40 in the third quarter; their second highest scoring quarter of the season to take a 91–86 lead to the fourth quarter.

Evan Fournier led the Knicks with five threes in their comeback, as he finished with 27 points on 10 of 17 from the field and added four rebounds and assists.

Minnesota overcame a five-point deficit in the final 3:41 by outscoring New York 10–3 at the end.

“I think that was key to turn it around,” said Wolves coach Chris Finch. “We got a couple steals right there and that led us to easy buckets.”

Towns converted a driving lay-up, three-point play with 29.3 seconds remaining, following Russell blocking Barrett’s four-foot driving lay-up, to take the last lead 111–109 with 29.3 left in the game. Randle would make the second of two free throws, and Patrick Beverly of Minnesota would make a free-throw to finish 112–110.

Knicks’ Fournier had a five-foot lay-up that was blocked by Jaden McDaniels with 4.9 seconds remaining, and Alec Burks missed a 26-foot three-pointer that could have won the game with one second left.

“It was a hard-fought game and didn’t get it done down the stretch,” said Knicks coach Tom Thibodeau.

“I think [coach] Finch did a great job of drawing the plays up, putting the people on the ball [where] he wanted, and we executed,” said Edwards. “We were down seven [points] with two minutes left. So for us to fight through that adversity and come back, and come out on top was real big.”

Minnesota will visit the Atlanta Hawks on Wednesday, while the Knicks host the New Orleans Pelicans on Thursday.