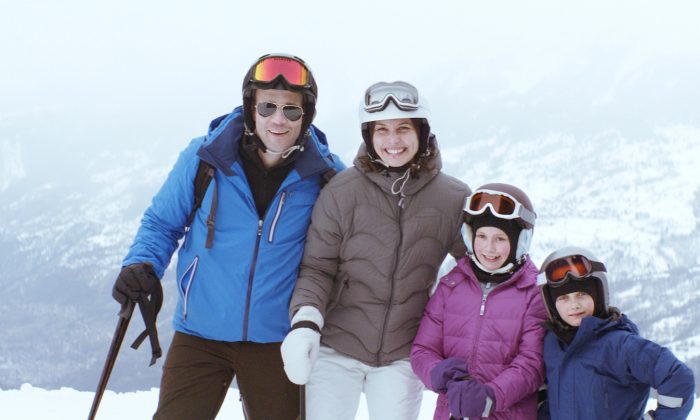 If ever there was a shot to make Alfred Hitchcock jealous, it’s the one that makes “Force Majeure.” A family on vacation in the French Alps lunches at a mountaintop restaurant. They and the other skiers, sunning on a deck, gaze at an avalanche deliberately set off high above.

But as the rolling cloud of white comes closer and closer, the spectacle becomes a terrifying threat. How the family—a handsome couple with two young children—reacts and the aftermath to that moment are the substance of “Force Majeure.”

Whereas Hitchcock might have set such a moment in an alpine thriller, Swedish director Ruben Ostlund situates it in a wry portrait of a shamed patriarch—a black comedy about a dissolving marriage on the (snowcapped) rocks.

The narration starts with a kick, from the first frame, as Philip Friedman (Jason Schwartzman) trudges angrily past slower sidewalk pedestrians. He’s an up-and-coming New York novelist whose story is narrated from the outside in a particularly bookish way (voiced by Eric Bogosian).

Philip is an ambitious young author whose extreme self-obsession is repellent to all (including the viewer) except for his mentor, the accomplished Philip Roth-like writer Ike Zimmerman (Jonathan Pryce).

The film is a curious combination of the close-up intimacy of Cassavetes, yet narrated from an arch, literary remove. Writer-director Alex Ross Perry has said he wanted to write a screenplay as might have been penned by Roth, who hovers over the film like Obi Wan Kenobi. But Perry excels in capturing the toxic, self-defeating egoism of a driven, talented jerk—and the damage he leaves behind.

‘White Bird in a Blizzard’

Their daughter Kat (Shailene Woodley) tries to stay out of the fray, preferring to hang with her hipster outcast friends and hook up with Phil, her pseudo-boyfriend, who lives across the street. Yet, she still notices her mother’s increasingly erratic behavior in the days leading up to her mysterious disappearance.

“White Bird” represents quite a richly realized accomplishment of mise-en-scène. Somehow director Gregg Araki maintains a vibe that is simultaneously nostalgic and insidious, getting some suitably cagey work from his cast.

With contributions from Joe Bendel, jbspins.blogspot.com