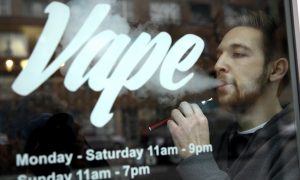 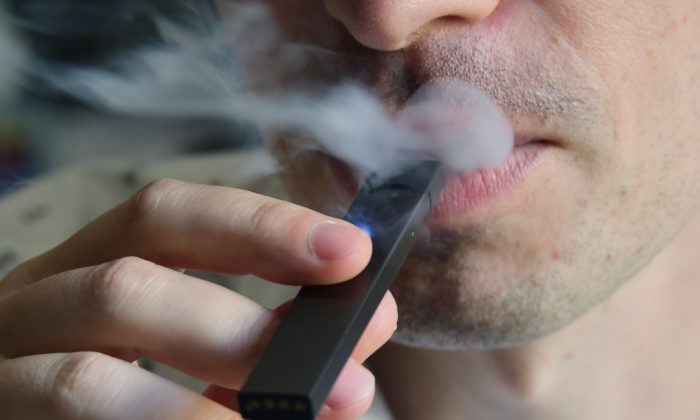 Three additional deaths were linked to vaping on Sept. 6, upping the total number to five, with federal officials warning people to stop vaping as multiple agencies probe the links between e-cigarettes and hundreds of possible vaping-related cases of illness nationwide.

Officials in Indiana, California, and Minnesota said that deaths in their states were linked to vaping, following reports from Illinois and Indiana.

The reports came as the governor of Michigan banned flavored e-cigarettes through executive action, making the state the first in the nation to do so.

The Minnesota Department of Health said that officials confirmed the first death in the state associated with an outbreak of serious lung injuries related to vaping. The patient was over 65 years old, had a history of underlying lung disease, and was hospitalized with a severe lung injury that led to other conditions and, eventually, death.

The patient died in August.

The death of a person older than 18 in Indiana was confirmed to be from severe lung injury linked to a history of e-cigarette use or “vaping,” the state Department of Health said.

“The tragic loss of a Hoosier and rising number of vaping-related injuries are warnings that we cannot ignore,” State Health Commissioner Kris Box said in a statement.

“We know that these products typically contain nicotine, which is highly addictive, and many cases report inhaling THC and other substances not available in commercial products. While it is unclear what substances are causing injury, when you use these products with other chemicals, you may not know everything that you’re inhaling and the harm it can cause.”

In California, the Los Angeles County Department of Public Health said that a recent death was “potentially related to the use of e-cigarettes,” prompting officials to warn against vaping.

“The bottom line is everyone should think twice about vaping until more is known about their impacts on the health of their users, and the role they play as a contributor to lung damage leading to death,” said Dr. Muntu Davis, county health officer, in a statement.

The Centers for Disease Control and Prevention (CDC) issued a similar message this week, saying it’s investigating more than 450 cases possibly linked to vaping in more than 33 states, the agency said in an update on Friday night.

Among the cases are 32 cases in Minnesota, 30 cases in Indiana, and 57 cases in California.

All of the cases reported to the CDC “have a history of using e-cigarette products,” the agency said in an update on Friday night.

“While this investigation is ongoing, people should consider not using e-cigarette products,” the agency said in a previous statement.

“People who do use e-cigarette products should monitor themselves for symptoms (e.g. cough, shortness of breath, chest pain, nausea, vomiting, abdominal pain, fever) and promptly seek medical attention for any health concerns.”

We are leaving no stone unturned in following any potential leads, including Vitamin E acetate found in many of the samples containing THC, and we’re committed to taking appropriate actions as the facts emerge. https://t.co/dJBJRfg3sd

“We are leaving no stone unturned in following any potential leads, including Vitamin E acetate found in many of the samples containing THC, and we’re committed to taking appropriate actions as the facts emerge,” he added.

“More information is needed about the products used, where they were obtained & what substances they contain. We urge consumers to avoid buying vaping products from the street, and to refrain from using THC oil or modifying/adding any substances to products purchased in stores.”