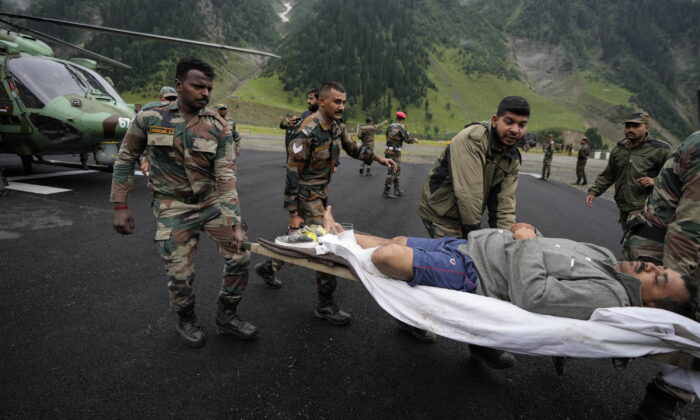 SRINAGAR, India—Emergency workers rescued thousands of pilgrims after flash floods triggered by sudden rains swept through their makeshift camps during an annual Hindu pilgrimage to an icy Himalayan cave in Indian-controlled Kashmir, officials said Saturday. At least 16 people have died and dozens were injured.

Authorities suspended the pilgrimage for two days as rains continued to lash the region. Teams of rescuers from India’s military, paramilitary and police as well as disaster management officials combed through the slippery mountain tracks and used thermal imaging devices, sniffer dogs, and through-the-wall radars to locate dozens of missing.

They dug through mud, sand, and rocks that swamped the campsites on Friday evening after hurtling down with a gush of water near the cave shrine revered by Hindus. Civilian and military helicopters evacuated the injured to hospitals.

Thousands of people were in the mountains when the rains struck.

Officials said about 15,000 devotees were moved to safer locations and at least five dozen injured were administered first aid at base camp hospitals set up for the pilgrimage, which is undertaken by hundreds of thousands of Hindus from across India.

Groups of pilgrims are staggered over 1.5 month for security and logistical reasons.

Ravi Dutt, the 69-year-old Hindu ascetic from eastern West Bengal state, was camping near the cave on Friday evening. He said that suddenly water gushed down from a mountain “sweeping away men, women, and our belongings too.”

“Everything was buried under a mountain (of mud and rocks),” Dutt said as he broke down. “I have never seen such an incident in my life.”

Abdul Ghani, a Kashmiri porter who rents his pony to pilgrims, said it was an utter chaos. “I just bundled a devotee on my pony and never looked back,” he said.

Indian Prime Minister Narendra Modi expressed anguish over the deaths. Manoj Sinha, New Delhi’s top administrator in the region, said: “Our priority is to save the lives of people. Instructions have been issued to provide all necessary assistance to pilgrims.”

The cave, at 13,500 feet (4,115 meters) above sea level, is covered with snow most of the year except for the short summer period when it is open to pilgrims.

Hundreds of pilgrims have died in the past due to exhaustion and exposure to harsh weather during the journey through the icy mountains. In 1996, thousands were caught in a freak snowstorm, leading to more than 250 fatalities.