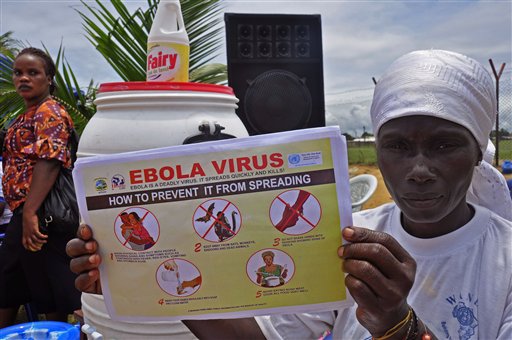 A Liberian woman holds up a pamphlet with guidance on how to prevent the Ebola virus from spreading, in the city of Monrovia, Liberia, Thursday, Aug. 14, 2014. (AP Photo/Abbas Dulleh)
Ebola

This Protein May Explain Why Ebola Is so Deadly

Discovery of a protein that makes the Ebola virus so effective at evading the immune system—and so deadly—may lead to more effective treatments, researchers say.

The Ebola virus, in the midst of its biggest outbreak on record, has infected about 1,800 people since March in four West African nations and killed more than half of them, according to the World Health Organization.

Researchers have developed a detailed map of how the protein, VP24, binds to a host protein that takes signaling molecules in and out of the cell nucleus. The map reveals that the viral protein takes away the host protein’s ability to carry an important immune signal into the nucleus.

This signal helps activate the immune system’s antiviral defenses, and blocking it is believed to contribute significantly to the virus’s deadliness.

“We’ve known for a long time that infection with Ebola obstructs an important arm in our immune system that is activated by molecules called interferons,” says senior author Gaya Amarasinghe, assistant professor of pathology and immunology at University of Washington in St. Louis.

“Now that our map of the combined structure of these two proteins has revealed one critical way Ebola does this, the information it provides will guide the development of new treatments.”

Coauthor Christopher Basler, professor of microbiology at Mount Sinai Hospital was the first to show that VP24 and VP35 were important to the virus’s ability to keep the immune system at bay.

In an earlier paper, Amarasinghe, Basler, and others revealed that VP35 blocks production of interferon, one of the main regulators of the innate immune system. This branch of the immune system specializes in fighting viruses.

“Interferon is critical to our ability to defend ourselves against viruses,” Basler says. “It makes a variety of responses to viral infection possible, including the self-destruction of infected cells and the blockage of supplies necessary for viral reproduction.”

In the new study, published in Cell Host & Microbe, Amarasinghe and Daisy Leung, assistant professor of pathology and immunology, show that VP24 tightly binds to a nuclear transporter, a protein that takes molecules into and out of the cell nucleus. Among the molecules these transporters take into the nucleus is STAT1, an important component of the interferon signaling pathway.

“Normally STAT1 is transported into the nucleus and activates the genes for hundreds of proteins involved in antiviral responses,” Leung says. “But when VP24 is attached to some of these transporters, STAT1 can’t get into the nucleus.”

The study shows that VP24′s action specifically prevents STAT1 transport. Other proteins that travel in and out of the cell nucleus and are important to viral replication likely are unaffected. The scientists already have initiated efforts to look for small molecules that block VP35 and now are applying those same approaches to VP24.

A National Institutes of Health grant is helping Amarasinghe and other researchers look for drugs to block VP24 and another Ebola protein, VP35. The group includes researchers at the Icahn School of Medicine at Mount Sinai, Washington University, the University of Texas Southwestern Medical Center, Howard University, and Microbiotix Inc., a Massachussetts biopharmaceutical company.