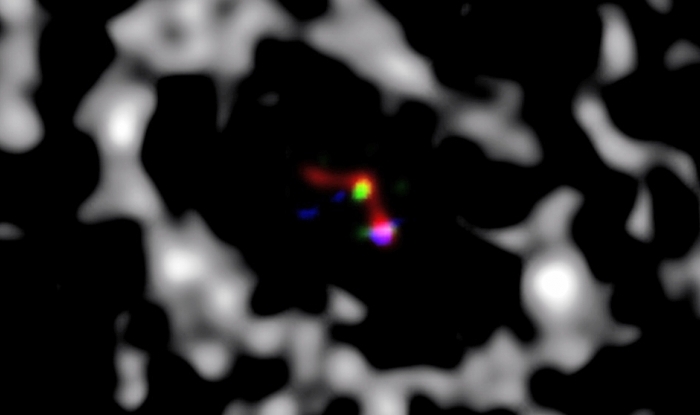 A composite image of LkCa15 shows the MagAO data, in blue, and the LBT data, in green and red. (Credit: University of Arizona)
Science

This Picture Shows a Planet Being Born

Scientists are watching the birth of a planet orbiting a star 450 light years away and say what they learn could answer some of the biggest questions concerning how planets form around other stars.

The alien planet, called LkCa 15 b, appears to be on its way to growing into a world similar to Jupiter.

“This is the first incontrovertible detection of a planet still in the process of forming—a so-called ‘protoplanet’,” says Kate Follette, a postdoctoral researcher at Stanford University and co-lead author on the study that is published in the journal Nature. Follette’s work produced a digital picture of LkCa 15 b glowing in the light of ultra-hot hydrogen gas.

The observation was combined in the paper with data from Steph Sallum, the co-lead author and a graduate student at the University of Arizona, who independently observed the same star with a complementary technique.

The planet is forming in a transition disk, a doughnut-like ring of dust and rocky debris orbiting its parent star, LkCa 15. The central clearings within transition disks are believed to be created by the formation of planets, which sweep up dust and gas from the disk as they orbit the star. Astronomers have long speculated that investigating these gaps could lead to the discovery of protoplanets, but getting a good look at these infant worlds has been challenging.

For the new study, researchers took a new tack, and designed an imaging instrument to look for a characteristic planet formation signature. The process by which a planet grows from a rocky or icy core to a full-fledged gas giant is incredibly energetic. As hydrogen gas falls from the disk onto the core of the protoplanet, it heats up and glows like a fluorescent light bulb, emitting a characteristic wavelength of visible light called “Hydrogen-alpha,” or H-alpha.

Using the University of Arizona’s Magellan Telescope in Chile, researchers were able to home in on this particular shade of red H-alpha light emanating from LkCa 15 b.

“I was pretty excited as soon as I processed the data, but I wanted to be cautious,” says Follette. “I was pretty sure I had found something interesting, but in this field we’re always chasing objects that are just at the edge of what we can detect. The really cool thing is that it survived all of our tests to make sure it was real.”

Firefly and a Lighthouse

To make the discovery, the scientists processed the images to remove the light from the host star, allowing them to isolate light from the much fainter planet. The protoplanet is very close to its parent star, and if it were much closer or fainter, LkCa 15 would have washed out its light completely.

“The difference in brightness between a star and a young exoplanet is usually comparable to the difference between a firefly and a lighthouse,” Follette says. “It’s very hard to isolate the light from the planet when it is so faint and so close to the star from our point of view. But, because we could focus on a special color of light where the planet is glowing very brightly, the signal was significantly stronger than what we normally look for.”

The images were sharpened using adaptive optics to correct for the bending of light as it passes through Earth’s atmosphere. The Magellan adaptive optics system is the first telescope with a visible light camera behind it capable of imaging at H-alpha, and will be an attractive technique for future planet-hunting work.

Adaptive optics imaging is allowing astronomers to fill in the birth cycle of planets, says Bruce Macintosh, professor of physics at Stanford who led the recent discovery of the slightly older planet 51 Eridani b.

“51 Eri b is an adolescent—about 20 million years old, already full-grown and still cooling off from the energy released during its formation. Kate’s planet is a baby, still heating up and growing.”

The team will continue monitoring LkCa 15 b to better understand the planet formation process, as well as the fingerprint it leaves on the transition disk. If this planet is responsible for the gap in the disk, it may indicate that similar holes in other disks are also signposts of developing planets.

The Five Most Earth-Like Exoplanets (So Far)

This type of work will ultimately provide better understanding of how planets form, and is driven by the desire to know whether the mechanisms by which we think our own solar system formed are the exception or the norm in the universe, Follette says.

“One of the fundamental human questions is whether we’re alone or unique. It’s cool to look at Jupiter-like exoplanets like LkCa 15 b, but ultimately we’re trying to push the technology to be able to detect Earth-like exoplanets.

“I’ve always been inspired by the famous ‘pale blue dot’ image of Earth taken by Voyager as it passed Saturn. We’d really like to do that some day for a planet around another star, and this sort of work is moving us in that direction.”

This article was originally published by Stanford University/University of Arizona. Republished via Futurity.org under Creative Commons License 4.0.