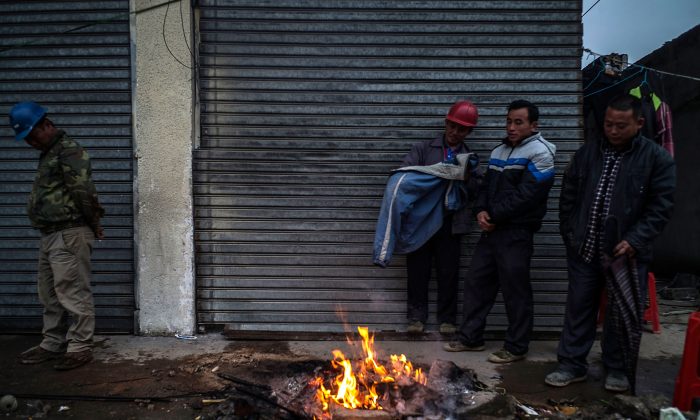 Workers keep warm next to a bonfire at a demolished industrial area at Houjie town in Dongguan, China, on Jan. 26. (Lam Yik Fei/Getty Images)
China

Let me shed some light on the issue by drawing up two scenarios.

Suppose a gold mine is discovered in Xinjiang. Someone invests in the mine, and the mine owner hires 100 miners to mine the gold. His annual gross profits are 10 million yuan ($1,543,000), and he pays workers 50 percent of his gross income in wages. So each worker receives an annual income of 50,000 yuan ($7,715). A worker spends 10,000 ($1,543) yuan on rent, which leaves him $6172 for getting married and raising a family. The mine owner still has 5 million yuan ($771,501) left for other expenses and investments. With workers having money to spend and a need to settle down, there is a demand for housing. Thus, the mine owner invests in building houses to sell or rent to the workers. Workers also need food. So the mine owner invests in restaurants and earns the workers’s money back. The restaurants also need more employees, so the workers’s wives now have jobs and an income as well. As the population and employment opportunities increase, local consumption rises. Under such circumstances, there are 100 families in this place a few years later. School-aged children have a need for education, which attracts more people to build schools. In addition, cafes, karaoke bars, cinemas, and shops are being built for workers to spend their money. After 50 years, this place has developed into a prosperous city of about 100,000 people. At this time, the mine is about depleted.

In the second scenario, things are a bit different. Suppose a gold mine is discovered in Xinjiang. Someone invests in the mine, and the mine owner hires 100 miners to mine the gold. His annual gross profits are 10 million yuan ($1,543,000). But this owner only pays 10 percent of his gross income to workers. So each worker receives an annual income of 10,000 yuan ($1,543). This amount of money is only enough for food. There is no money leftover to rent an apartment or get married. Workers have to squeeze into factory shacks for shelter. Although the owner makes 9 million yuan ($1,388,700) a year, he has to invest the money in other places, as the local people are poor and have no consumption power. The owner buys a house in Beijing, loans money at high rates of interest in the coastal areas, and begins investing for possible future emigration to foreign countries. Locally, the owner only buys a luxury villa, hires several workers as bodyguards, and finds a young woman to be his mistress. The workers work very hard and try to save some of their wages for medical emergencies and retirement. There is no surplus for other things. As a result, besides a few luxury villas and some small businesses, there exist no other enterprises 50 years later. After the gold mine is depleted, the owner departs with a huge amount of money, leaving behind pollution, unemployment, and poverty.

These two simplistic scenarios really make the point clear. They illustrate the different development models found around the world.

The increased wealth in China was not sufficiently distributed among the population but mostly went to the government and the owners of enterprises thus keeping working people’s purchasing power down.

The reason is very simple. Just like I described in the second scenario, the increased wealth in China was not sufficiently distributed among the population but mostly went to the government and the owners of enterprises. Government investments drive consumption only on a very small scale. The effect of government investments has been an increase of production capacity and supply, which has resulted in the severe overcapacity we see in China now. In addition, to ward off mass unemployment and to gain export advantages, labor costs have been reduced again and again, thus keeping working people’s purchasing power down.

For example, Xinjiang is a large province that is rich in resources, comparable to many countries in the Middle East. Local people should be very wealthy, but the reality is the opposite: Xinjiang is very poor. A place rich in resources is not necessarily highly developed and prosperous. It all depends on whether the government puts people first.

The Chinese people are not wealthy. Moreover, they must take care of their pensions, medical care, and children’s education out of their own pockets. People whose financial situations are slightly better are also under pressure. Some of their money is in the bank, some is invested in real estate, and some in the stock market. The amount of money they have looks like a lot, but it does not circulate; it is dead money. A few wealthy people have a lot of money. How do they invest and spend it? They don’t have that many options. They can buy several apartments. No matter how many luxury goods they buy, it does not amount to that much in terms of investment or domestic consumption. Thus, wealthy Chinese have been going overseas to buy houses and businesses.

When a well-educated young man can only afford a small apartment after working his whole life, when a child’s education empties the family’s savings, when money invested in the stock market is equivalent to donating it to the government, and when a farmer’s annual income is less than a wealthy man’s meal, can we expect people to not be thrifty, to not save their money, to not worry about their retirement? Can we expect the tens of trillions of savings in the bank to be turned into consumption just like that?

Fan Di is an independent economist and part-time professor of Peking University and Sun Yat-sen University. He obtained a Ph.D. at the University of California, Berkeley, supervised by Li Yining of Peking University and Nobel Prize winner George Arthur Akerlof. Fan has been a senior executive and consultant at major banks, financial firms, and large companies. This article was written in June 2015 and has been widely circulated on the Chinese Internet since then.