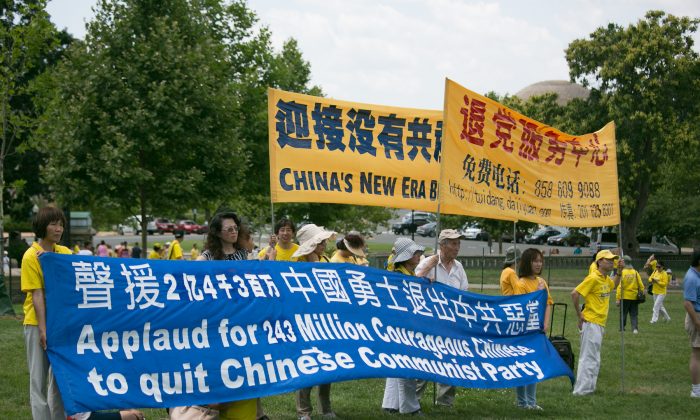 It doesn’t take a genius or someone with supernormal ability to tell that our world is in much chaos today, not minor or trivial chaos, but very “bigly” one, to borrow the word/phrase of Donald Trump. (It is said that Trump actually meant “big league”, not “bigly”, which stirred up a surge on the internet in googling this word). In fact, meditation cultivators from the Buddha and Tao schools all know that human beings are in the end of the last havoc, and in the end of the end of time. During this period, it’s expected that fiends of all kinds would emerge to obscure and confuse people, and hurt human society. That’s exactly what is happening with the words and speeches of those theorists, theorizers, and outright trumpeters and imperial literati of the Chinese Communist Party (CCP).

These trumpeters and imperial literati not only blow their horns for the murderers and butchers of Tiananmen Square and culprits of organ harvesting from Chinese Falun Gong practitioners, they also appear as scholars and researchers in think tanks and university campuses throughout China. Moreover, while taking full advantage of free speech outside of China to dupe Western society, they are also taking full advantage of authoritarianism inside of China to fool the Chinese people, with their senseless remarks and comments. Their words and speeches, unchecked, lopsided, and backed by an ever more repressive regime, are becoming more and more like the kundalini syndrome or qigong psychosis of the secular world.

In fact, kundalini syndrome or qigong psychosis is an often misused and misunderstood term, even the definition in Wikipedia on that term is erroneous, as Wikipedia itself put a disclaimer on that, saying the article was not based on any reference or credible source. In other words, it’s written by someone haphazardly. The state of kundalini syndrome or qigong psychosis refers to a hypothetical situation in qigong exercises where a slight psychosis results from some sort of accident. In real qigong practice from the orthodox schools, such as Falun Dafa (Falun Gong) meditation, there is no such thing as qigong psychosis, because the real cultivation and meditation are at levels far higher than qi and high level cultivation is guided by master and does not involve such a thing as psychosis. But nonetheless, if someone is practicing an unorthodox way or deliberately entering into a wicked way, or inviting possessing animals to their precious bodies, he or she could indeed put himself or herself into trouble. When those trumpeters stand with the CCP regime, or the red dragon as CCP is commonly known, and under the disguise of think tank researchers, their senselessness is exactly what the symptom of psychosis is all about.

CCP propaganda machine claims 2016 the era where “CCP is in dialogue with the world!” Other Chinese government literati asserts that the financial market, which is modeled after that in the West, does not need a Western style of regulation and monitoring. Still another says CCP is “superior” in managing crisis than their western counterparts, and as far as global management is concerned, China may not be a student or apprentice anymore, and could be a “teacher or mentor” of other nations. It would be interesting to analyze these words from the hermeneutics perspective.

The hermeneutics of the West is the study of history, literature, philosophy, and ancient words especially scriptures of biblical importance. As a methodology, as defined by some Stanford scholars, it provides us with a tool to analyze human behavior and spoken words. In fact, hermeneutics is somewhat similar to Chinese exegesis, or Xun Gu Xue, as the latter is a branch of studies focusing on ancient literature as well.

One Chinese think tank researcher said that BRICS countries (including Brazil, Russia, India, China, and South Africa) are now becoming an important platform for global management. Based on his assumptions, at the 10th anniversary of BRICS, the group accounts for 43 per cent of world population, 23 per cent of worldwide GDP, and 16 per cent of worldwide trade. In actuality, the number shows exactly how feeble instead of how strong these countries really are! Imagine a group of countries, with about half of the population of the world, but with only a quarter of the wealth of the world, and one eighth of the global trade! At so much below world average, how can they be considered the “engine of world economic growth” and global heavy weights?

The “dialogue” between CCP and the world is also phony. When 250 million people of China have declared their departure from Communist memberships, the Communist party is quite lonely in the global arena. The trumpeters deliberately confused “China” and “Chinese Communists”, they use the term “China” when they talk to people of the outside world, and use “CCP” when telling people inside China the same story. Foreign governments recognize and interact with China, and not really with the Communists. The legitimacy of CCP in China is largely ignored by the international community for the practical reasons that they have to deal with China and enter Chinese market! Till today, the U.S. still forbids Communist members from entering America!

The Eastern Bloc, traditionally referring to Soviet Union and Eastern European countries, is now mostly denoting the Far East. Vietnam is cooperating with America and welcomes American presence in the disputed South China Sea, the relationship between U.S. and Cuba is thawing faster than we think, and Kim Jong-un regime could be removed by U.S. and South Korean special forces at any time. With no companions and confidantes, the CCP is facing real danger in its very own existence and the so called “dialogue” with the world is nothing but whistle blowing while walking in the dark.

Is China still a student or is it good enough to be a teacher on its path to modernization? Frankly speaking, China is not a very good student of the West, that’s because, like the emperors of Qing dynasty, the CCP only hopes to learn science and technology form the West, but never freedom, democracy, and soft skills of societal governance. An American scholar once said that the U.S. doesn’t care too much about China stealing high tech from the U.S., as the U.S. can always come up with newer, better technologies in military, computer science, and manufacturing. What the U.S. should be “fearful” of China is, according to this scholar, that China learns the soft power of constitution of the U.S., then the true potential of the Chinese people could be released and China could therefore be an adversary of America!

Yet the real essence of western countries is exactly what the CCP rejects and refuses. When CCP trumpeters say the Chinese financial market doesn’t need western style regulation and scrutiny, people were wondering if the government of China truly wants smooth, fair, and efficient capital markets. Now the answer is clear, the regime has done with looting the wealth of the nation, and is now in the stage of preserving their loot. Of course they don’t want the likes of the yokes that’s on Wall Street!

Unsurprisingly, when CCP trumpeters and imperial literati become more and more like having kundalini syndrome or qigong psychosis when they speak senselessness, this is because their insanity is well planned and executed: when the aristocrat behind the scene gets more concerned about losing power and control, sanity of the front players could hardly be maintained.