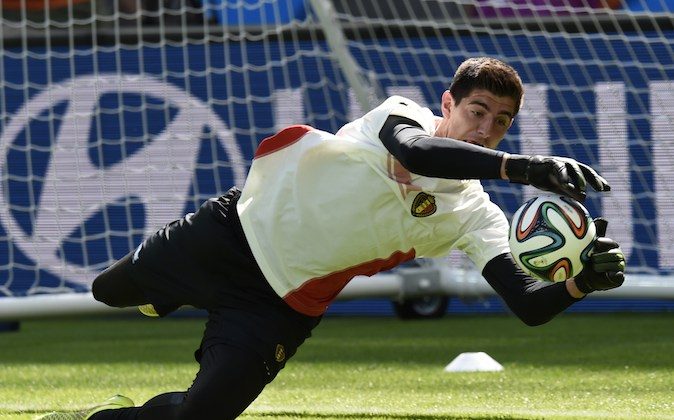 Belgium's goalkeeper Thibaut Courtois grabs a ball during a training session at the Mineirao Stadium in Belo Horizonte on June 16, 2014, on the eve of the 2014 FIFA World Cup group H football match Belgium vs Algeria. (PHILIPPE DESMAZES/AFP/Getty Images)
Soccer

“When the World Cup in Brazil is over, Courtois will be coming straight back to Stamford Bridge – end of story,” Chelsea boss José Mourinho told Marca.

The highly-rated 22-year-old’s transfer status has been the subject of some speculation recently.

Courtois signed for Chelsea in 2011, but spent the past three seasons on loan to Atletico Madrid. He excelled with the La Liga side, winning a La Liga title and playing in a Champions League final.

The shot-stopper is not too keen to return to Stamford Bridge, however, as he will face competition with incumbent goalkeeper Petr Cech.

“Do I want to be No1 wherever I play next season? Yes, I think with my age and the performances I had I want to play. To be on the bench is not the nicest thing,” Courtois said.

Here is an AP article on Courtois.

MOGI DAS CRUZES, Brazil (AP) — At the age of 22, Thibaut Courtois already has a pile of silverware and a reputation as one of the best goalkeepers in the world.

So when it comes to the World Cup, Belgium’s No. 1 is a rookie in name only.

Belgium coach Marc Wilmots rattled off the list of honors Courtois has collected since he played his first game for Racing Genk at age 16, right up to last month’s Champions League final with Atletico Madrid: “Look at where he plays, his development. Champion at Genk, then you win UEFA Cup, then the Super Cup, Champions League final, and you win the Spanish league title,” he said with a staccato rhythm, surely forgetting a few honors in between.

As a measure of his stature, Courtois is the undisputed No. 1 goalie for Tuesday’s game against Algeria even if Liverpool’s Simon Mignolet, coming off a great season himself, is ready to step in whenever needed.

With some saying talented players shouldn’t leave their home country too early, Courtois is proof that it can be done.

At 19 he was a stranger in the city of Madrid. Two years later, his Spanish was fluent, and his goalkeeping without compare in a nation that has a World Cup winner in Iker Casillas. Courtois was given the top goalkeeping award in Spain for the past two years.

The daring move to Spain as a teenager by way of Chelsea is already paying dividends. Among his many attributes, hs calmness under pressure is among the most impressive.

Nowhere is that more important than at a World Cup.

“If you go abroad quickly and are able to play such games with Atletico, then you know what to expect here. Others might have more nerves,” he said.

Wilmots said that “he always stays cool and collected. He feels no pressure and he is hungry.”

Even after a year that was capped by winning the Spanish league title at Barcelona’s Camp Nou in the last round.

Courtois was looking at a perfect season until Real Madrid equalized in injury time in the Champions League final before sweeping past its crosstown rival 4-1 in extra time.

Courtois, though, is young and moving fast, looking forward to his biggest challenge yet.

“I’ve been looking forward to this as of my last match with Atletico,” he said.

Beyond his poise, what stands out is his appearance. At 1.99 meters (6-foot-6), he can’t hide he is a child of two Belgian top class volleyball players. He can pluck crosses out of the air with consummate ease, leaving the biggest forwards all too often waiting in vain for the ball.

Add to that an uncanny speed for such a tall athlete to get down on the grass to swat out low drives. And for purists, there is little as graceful as to see him flying through the air to tip high balls over or wide.

To understand what to expect at the World Cup, Courtois did his homework by asking Altetico teammate Diego Godin.

The Uruguay central defender already had his World Cup moment, playing in the semifinals in Cape Town four years ago.

“He said his semifinal in South Africa could be compared to the final of the Champions League,” Courtois said.

So, been there, done that.

“I can picture it when I look to the intensity,” he said.

If Courtois excels here, he could become the third Belgian to win the Lev Yashin trophy as best World Cup goalie after Jean-Marie Pfaff did it in 1986 and Michel Preud’homme in 1994.

Strangely enough, though, it is not a Belgian Courtois has been looking up to.

His hero always was Edwin van der Sar of the Netherlands, Ajax, Juventus and Manchester United. The equally tall Van der Sar got as far as the World Cup semifinals in 1998.

“I always looked up to him,” Courtois said. “Our styles resemble, so does our build.”