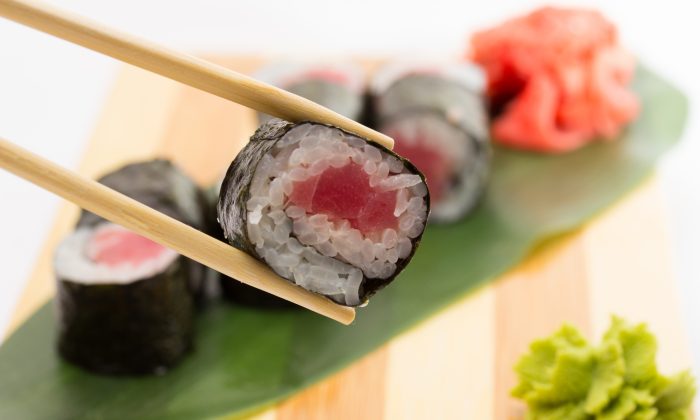 These Two Types of Tuna Are Carrying More Mercury

Mercury concentrations in Hawaiian-caught bigeye and yellowfin tuna are steadily rising and mirror increases in North Pacific waters that have been linked to atmospheric mercury emissions from Asia.

Researchers compiled and re-analyzed data from previously published reports on yellowfin and bigeye tuna caught near Hawaii over the past four decades, then used a mathematical model to look for trends.

The new study updates yellowfin findings that first author Paul Drevnick reported two years ago and expands the effort to include bigeye tuna.

“This paper confirms our previous work showing that mercury concentrations in yellowfin tuna caught near Hawaii are increasing, and it demonstrates that the same phenomenon is happening in bigeye tuna,” says Drevnick, a former University of Michigan researcher who now works for the Alberta provincial government in Calgary.

Sashimi and the Grill

Both yellowfin and bigeye tuna are marketed as ahi and are widely used in raw fish dishes—especially sashimi—or for grilling. In January, the US Food and Drug Administration and the US Environmental Protection Agency added bigeye tuna to its list of fish to be avoided by pregnant women, women who might become pregnant, breastfeeding women, and young children due to mercury concerns.

Mercury is a toxic trace metal that can accumulate to high concentrations in fish, posing a health risk to people who eat large, predatory marine fish such as swordfish and tuna. In the open ocean, the principal source of mercury is atmospheric deposition from human activities, especially emissions from coal-fired power plants and artisanal gold mines.

In the North Pacific, mercury concentrations increased about 3 percent per year between 1995 and 2006.

In North Atlantic waters, mercury concentrations peaked in the 1980s and ’90s and are now declining in response to environmental regulations in North America and Europe.

But in the North Pacific, mercury concentrations in waters shallower than 1,000 meters increased about 3 percent per year between 1995 and 2006 and are expected to double by 2050 if current mercury deposition rates are maintained, according to Drevnick.

“At the same time, more stringent policies are needed—especially in Asia—to reduce releases of mercury into the atmosphere, which eventually make their way into the oceans and into the fish we eat.”

For both bigeye and yellowfin tuna, Drevnick and coauthor Barbara Brooks of the Hawaii Department of Health found that mercury concentrations in fish tissue rarely exceeded the US Food and Drug Administration’s “action level” of 1 part per million of methylmercury—the toxic organic form of the element—in an edible portion.

“The FDA action level is defined as ‘a limit at or above which FDA will take legal actions to remove products from the market,’ and according to the limit and the data here, no action should be taken,” they write.

The US Environmental Protection Agency has a “fish tissue residue criterion” for methylmercury that applies to freshwater and estuarine fish and shellfish—but not to marine fish such as tuna. Even so, the authors note that the average mercury concentrations for both yellowfin and bigeye now exceed the EPA criterion and that “consumers of yellowfin tuna and bigeye tuna caught in the North Pacific are not protected from adverse effects of mercury.”

The research appears in the journal Environmental Toxicology and Chemistry.

This article was previously published by University of Michigan.  Republished via Futurity.org under Creative Commons License 4.0.