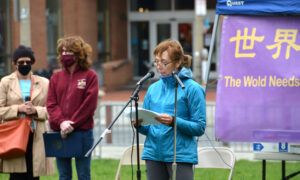 'She Instilled in Me a Deep Appreciation and Respect for Asian Culture:' Grateful Flight Instructor on Eve of Mother’s Day
0
Share Now
TelegramFacebookTweetEmailTellMeWeReddit
Copy Link 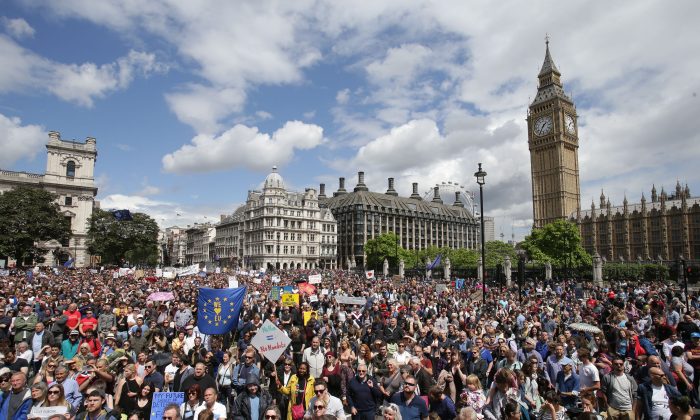 "Remain" supporters demonstrate in Parliament Square, London, to show their support for the European Union in the wake of the referendum decision for Britain to leave the EU, known as "Brexit", Saturday July 2, 2016. Demonstrators wearing EU flags as capes and with homemade banners saying "Bremain" and "We Love EU" gathered on the streets for the March for Europe rally. At rear right is the Elizabeth Tower containing Big Ben. (Daniel Leal-Olivas/PA via AP)
Special

LONDON—Theresa May, the leading Conservative candidate to succeed David Cameron as British prime minister, pledged Sunday to unify her divided party and country behind a slowly negotiated exit from the European Union.

Home Secretary May, who holds a strong lead over four party rivals before Tuesday’s initial leadership ballot, billed herself as best placed to bridge the gulf between ardent opponents and supporters of EU membership.

May said that under her leadership, the United Kingdom wouldn’t formally declare its intention to leave the EU until next year, meaning a British exit from the 28-nation bloc might not happen until 2019. Under Article 50 of EU treaty law, members who formally apply to leave face a two-year deadline to negotiate new agreements with EU partners.

“What’s important is that we do this in the right timescale to get the right deal for the UK. We shouldn’t invoke Article 50 immediately,” May said in a BBC television interview. “It shouldn’t be before the end of the year. We need to establish our own negotiating position.”

May officially supported Cameron’s pro-EU efforts but avoided campaigning herself. She argued Sunday this relative neutrality would help her build consensus between the 17 million who voted for a British exit, or “Brexit,” and the 16 million who voted to remain in the June 23 referendum.

“I’ve been clear that Brexit means Brexit,” she said. “What we need to do is to bring those two sides together, bring ‘leave’ and ‘remain’ together, and bring the country together.”

Four other Conservatives are competing with May to take the helm of Britain’s governing party following Cameron’s resignation in the immediate wake of his referendum defeat.

Tuesday’s initial ballot of 330 Conservative members of the House of Commons will eliminate the least popular candidate, followed by two more internal party votes Thursday and July 12 to reduce the field to two. Both surviving candidates will spend weeks seeking support from the party’s approximately 150,000 grass-roots members before a winner is declared Sept. 9.

Media polling of Conservative MPs suggests that May already has more than 100 lawmakers’ votes secured, while three others — anti-EU candidates Michael Gove and Andrea Leadsom and pro-EU candidate Stephen Crabb — have secured around 20 each. The other anti-EU candidate, former Defense Secretary Liam Fox, has secured only a handful of votes and is considered most likely to be eliminated from the race Tuesday.