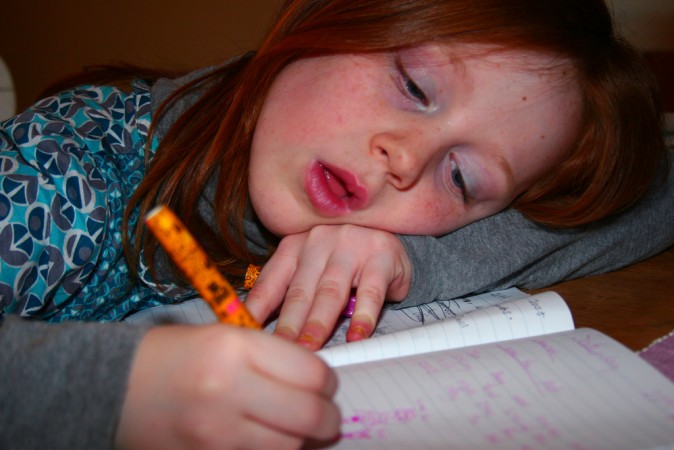 There’s One Answer. It’s at the Back. And Don’t Look.

One of the reasons behind our choice to homeschool was our own experiences with the educational system in our country. I emphasize ‘system’, because that seems to be the problem: the system of education that asks us all to believe a common set of assumptions, which are pretty much outdated and untrue, and which wastes the potential of many children. The same scenario that existed for our parents and grandparents, as far as education was concerned, doesn’t exist anymore. For example:

“When we went to school, we were kept there by a story, which was, if you worked hard, and did well, and got a college degree, you would have a job.

Our kids don’t believe that.”

Our schools have become factories (or were always designed that way), our kids are the widgets they produce, and the widgets that fit the best into the current economic ‘matrix’ get the fast track to academia, white collar, and the upper middle class, etc. Those widgets that are different in any way are shunted off to the working class, to be the engine beneath the economic vehicle – the labor.

Now, obviously that’s the ultra simplified version, and better minds than mine have taken on the connection between the industrial revolution and our methods and systems of education, but the point is, our schools and our centers of learning need to be re-thought.

Here’s an example. Recently I came across an ‘Animate’ of a talk given by Sir Ken Robinson to the RSA, discussing changing the ways in which we look at education.

At around 8 minutes into this video, Robinson starts talking about divergent thinking as it relates to kids:

“Divergent thinking isn’t the same thing as creativity. I define creativity as the process of having original ideas that have value.

Divergent thinking isn’t a synonym but is an essential capacity for creativity.

Robinson relates that tests have been developed for this (an example question is “How many uses can you think of for a paper clip?”), and the scoring based on the number of answers each person came up with. An average person gets 10-15. Someone really good at divergent thinking comes up with 200. According to Robinson, in one such study, a group of 1500 kindergarteners took this, with a whopping 98% of them testing at “Genius” level in divergent thinking.

But why? Referring to that study, in which those kids were re-tested over the next ten years:

“A lot of things have happened to these kids as they’ve grown up. A lot. But one of the most important things that has happened to them, I’m convinced, is that by now, they’ve become educated.

They’ve spent 10 years at school being told there’s one answer. It’s at the back. And don’t look. And don’t copy. Because that’s cheating.

Check it out, it’s well worth the 12 minutes:

Derek Markham
Follow
I’m a freelance writer, available for content creation, editing, and proofreading. I can advise and help implement social media strategy for green and sustainability businesses, and I enjoy the conversational nature of engagement with readers and customers. I’m full of ideas and off the wall thinking, and can help you with your business ideas and strategy.
SHARE
Friends Read FreeCopyFacebookTweet
You May Also Like