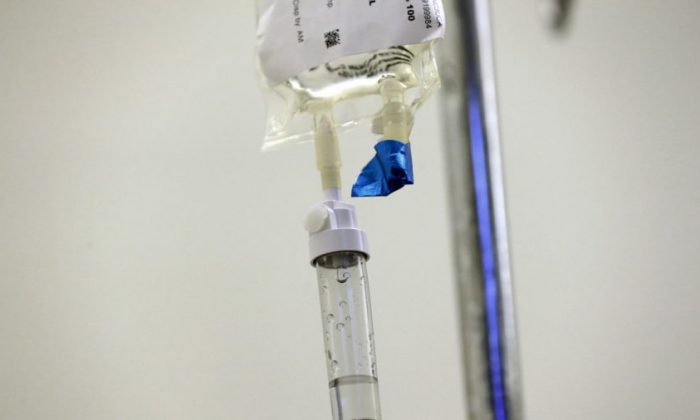 Chemotherapy drugs are administered to a patient on May 2017. (Gerry Broome/AP Photo)
Health News

There Will Be a Cure for Cancer Within a Year, Israeli Scientists Claim, but Others Not so Sure

A group of Israeli scientists said they will likely develop a cure for cancer within the next year, it was reported.

The treatment is being developed by Accelerated Evolution Biotechnologies, The Jerusalem Post reported on Jan. 28.

“We believe we will offer in a year’s time a complete cure for cancer,” said Dan Aridor, chairman of the company’s board, reported the Post.

“We believe we will offer in a year’s time a complete cure for cancer."

The treatment, which is known as MuTaTo, will use cancer-targeting peptides and a toxin to kill cancer cells.

CEO Dr. Ilan Morad said the treatment will be personalized. Specific drugs will be given to patients based on their type of cancer, the report said.

He said the treatment will also target cancer stem cells and will eliminate the chance of recurrence.

Aridor, meanwhile, said it will work from “Day 1” and will cause “no or minimal side effects at a much lower cost than most other treatments.”

LIFE-SAVING DISCOVERY: “We believe we will offer in a years’ time a complete cure for #cancer." 🇮🇱🔬READ HERE how a…

“Our solution will be both generic and personal,” Aridor stated.

Morad added: “We made sure that the treatment will not be affected by mutations; cancer cells can mutate in such a way that targeted receptors are dropped by the cancer.”

“The probability of having multiple mutations that would modify all targeted receptors simultaneously decreases dramatically with the number of targets used,” Morad said. “Instead of attacking receptors one at a time, we attack receptors three at a time—not even cancer can mutate three receptors at the same time.”

However, some doctors are skeptical of the treatment.

“Of course, curing cancer is the goal of everyone who comes to work every day at a cancer center—and if this company does, in fact, cure cancer, they will have my congratulations and thanks. But cancer is multiple diseases, and it is highly unlikely that this company has found a ‘cure’ for cancer, anymore than there is a single cure for infections,” Dr. Ben Neel, director of Perlmutter Cancer Center at NYU Langone Health, told Fox News.

The treatment also hasn’t yet been tested on people yet.

But, according to Neel, “More likely, this claim is yet another in a long line of spurious, irresponsible and ultimately cruel false promises for cancer patients.”

Dr. J. Leonard Lichtenfeld, with the American Cancer Society, also disputed the claims made by the Israeli team.

The Society's Chief Medical Officer, Dr. Len Lichtenfeld, shares his thoughts on the news report today about a new quick and inexpensive cancer cure on the horizon.

“Unfortunately, we must be aware that this is far from proven as an effective treatment for people with cancer, let alone a cure,” he wrote on his blog on Jan. 29.

“This is a news report based on limited information provided by researchers and a company working on this technology. It apparently has not been published in the scientific literature where it would be subject to review, support and/or criticism from knowledgeable peers,” he said.

He added: “My colleagues here at American Cancer Society tell me phage or peptide display techniques, while very powerful research tools for selecting high affinity binders, have had a difficult road as potential drugs. If this group is just beginning clinical trials, they may well have some difficult experiments ahead.”

Meanwhile, it will take some time to see the benefit to the Israeli team’s approach to treat cancer.

“And unfortunately–based on other similar claims of breakthrough technologies for the treatment of cancer–the odds are that it won’t be successful,” he said.

Another doctor, meanwhile, told the Daily Mail that it’s not likely there will ever be a surefire cure for cancer.

Many types of cancer can be prevented by “stopping smoking, improving diet, more physical activity, better weight control,” and more, the doctor said.