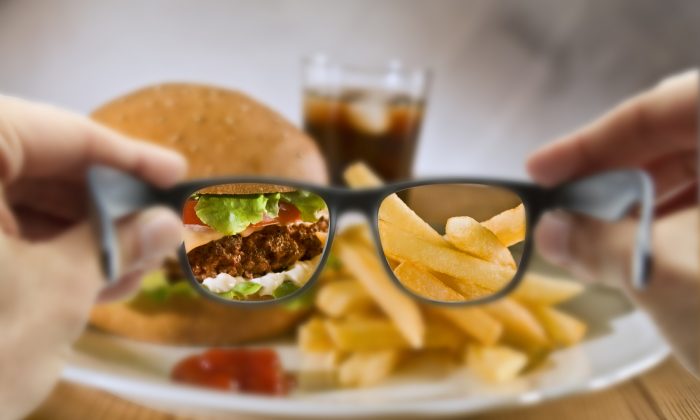 The Western Diet Is So Unhealthy, It’s Affecting Our Eyes

Today, scientific research has shown that our eating habits are strongly linked to the risk of chronic diseases like obesity, heart disease, and diabetes.

But now, a study partly funded by the USDA (Department of Agriculture) and sponsored by the National Institutes of Health (NIH) has found an association between nutrition and macular degeneration (AMD), a common eye disease. It is the leading cause of blindness among people aged 65 and older.

The study found an increased risk of developing AMD among people who consume a diet characteristic in Western developed countries.

The macula is a group of light-sensing cells at the back of the retina. As our eyes age, damaged proteins and lipids—known as “drusen”—will accumulate in the macula. High levels of drusen are an indicator of AMD risk.

The study was based on food consumption data obtained from 4,000 participants who either had little or no drusen in their eyes, intermediate to high levels of drusen (early AMD), or an atrophied macula (advanced AMD).

Scientific studies have shown that consuming an Asian diet can reduce the risk of a number of different chronic diseases.

Soybean products like tofu or soy milk contain isoflavones, an element that can reduce cholesterol and prevent against cancer, according to University of California, San Francisco’s Cancer Resource Center.

Instead of the Western diet of eating lots of meat—which is high in saturated fat—people in Asia traditionally consume lots of fish like salmon and mackerel, which contain omega-3 fatty acids. They are a healthy element that reduces cancer risk.