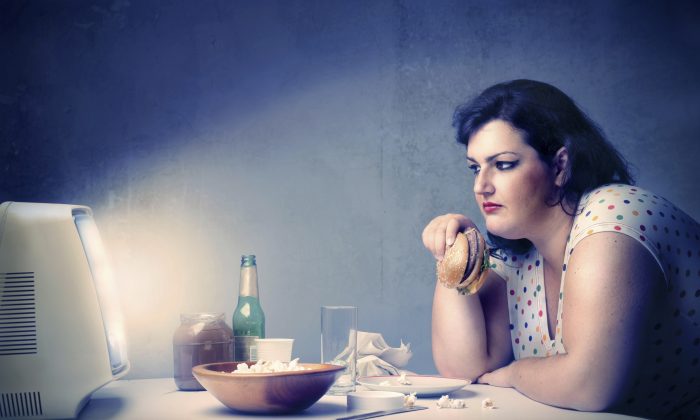 Unhealthy dinner in front of a TV. (Bowie15/iStock)
Health News

Despite the wonders of the Western diet, the United States has some of the least fit people in the world. We develop high cholesterol, high blood pressure, high blood sugar, diabetes, heartburn, and gastroesophageal reflux disease from poor food choices, often in front of TV—and then aching backs, painful joints, poor circulation, and more from the obesity that results.

The family meal, where we learned portion control and restraint, is a dying cultural icon. Parents used to lament setting the table with the TV remote—now they threaten they will stab any kids bringing their cells to the table with a fork. The threats don’t help. Overeating is often correlated with doing something else while eating and not giving total attention to your food and how much you’ve consumed. Clearly texting while eating will not help.

The family meal, where we learned portion control and restraint, is a dying cultural icon.

Nor are TV and the loss of the family meal the only culprit. Huge portion “supersizing,” free refills, and all-you-can-eat buffets encourage people to get their money’s worth at the price of their waistlines and health. Another culprit is the ubiquity of snacks themselves. Once upon a time, snacks weren’t available in banks, bookstores, body shops, hardware stores, and certainly hospitals. When some Europeans visiting a U.S. mall saw people in the food court eating cheese fries at 10:30 in the morning, they asked, “What meal is that?” Good question.

The Metropolis and Mental Health: Are Big Cities Making Us Sick?

The fashion industry does not help either. Size inflation has miraculously made women who were a size 7 or 9 in high school or college size “zeros” today. Except that they aren’t. Go to a vintage clothing store where clothes from the 1980s and 1990s are sold and you will see what a “real” size 5 or 7 is. And beware of baggy, low-rider, and stretchy styles which perpetuate denial.

Despite the wonder of Western medicine, the United States also has some of the least happy people in the world.

Despite the wonder of Western medicine, the United States also has some of the least happy people in the world. We “suffer” from seasonal allergies, seasonal affective disorder, social anxiety, depression, bipolar disorder, attention deficit hyperactivity disorder, erectile dysfunction, dry eye, fibromyalgia, chronic fatigue, restless legs, excessive daytime sleepiness, and much more. Some of the conditions barely existed before drug ads and some of the treatments only add to the obesity and health problems with their side effects.

Americans are surrounded with advertising and are more inclined to add a new drug or product to treat a problem than to give one up.

Americans are surrounded with advertising and are more inclined to add a new drug or product to treat a problem than to give one up. That is fine with marketers but can result in situations like this one depicted on a T-shirt: