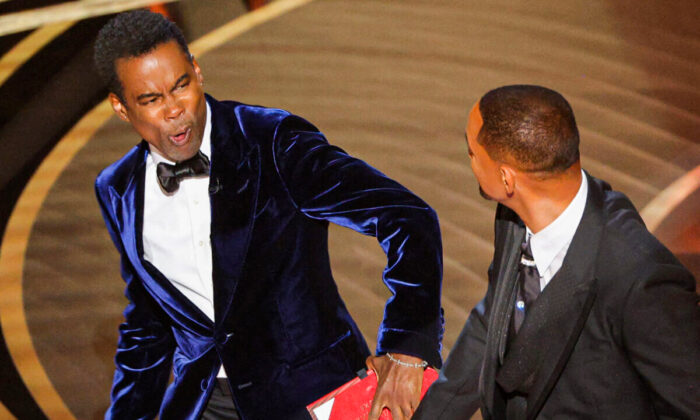 Hollywood long ago made violence profitable, cranking out “entertainment” every year that has become increasingly graphic and realistic. It also never tires of using its products to lecture the rest of us on favourite “woke” issues such as diversity, racism, homophobia, and climate change.

Yet concerns that depicting excessive violence might pose a long-term threat to the mental well-being not only of children but also of adults are dismissed by studio executives whose only eye is on the bottom line. Tinsel Town is also too wrapped up in its own narcissism to deal promptly with egregious examples of violent behaviour on its own studio lots.

And so, steeped in its own make-believe world, the celebrity audience at this year’s Oscars ceremony at first thought the slap actor Will Smith delivered across Chris Rock’s jaw was all part of the night’s entertainment. Perhaps inured to violence because of routine on-screen depictions of it, many of those watching were incredulous that this assault was for real.

Smith, who rose from modest beginnings to become one of the world’s most celebrated and successful black actors, was back on stage soon after to collect an Oscar—to a standing ovation—which, some acerbic commentators were quick to note, would probably not have happened had Rock’s assailant been a white man. In a teary acceptance speech, he expressed remorse for his action and excused himself as “a work in progress.”

Critics, for the most part, accepted this. After all, Smith has become a role model—not just for emerging black actors but for young black men everywhere. For now, he appears to have emerged unscathed from The Slap incident. And since Rock declined to press charges, Smith also appears to have avoided having to explain his criminal act to a judge.

But Smith’s reaction to Rock’s quips is not the only behaviour now caught in the spotlight. The Academy of Motion Pictures, which stages the annual Oscars shindig, was slow to act—notwithstanding its frequent and easy moralistic posturing about “respect,” “safety,” “diversity,” and “abuse.” It prevaricated for several days before making an announcement.

Concerned, no doubt, lest it show itself to be as vacuous and unprincipled as the industry it purports to represent, the Academy eventually decided to sanction Smith by providing notice of a vote on his conduct which could lead to the actor’s suspension or even expulsion.

On the night itself, it said that Smith was asked to leave the ceremony, but he refused. “Things unfolded in a way we could not have anticipated,” the academy said.

Hollywood has flip-flopped before when confronted with evidence of criminal behaviour. The #MeToo movement only gradually brought to light the long-hidden sexual misconduct of hitherto unchallengeable Tinsel Titans, such as Harvey Weinstein. But other careers came to an abrupt end as a torrent of allegations of inappropriate sexual behaviour poured forth.

The Slap was anything but hidden. It was seen on live television by up to 25 million viewers who, understandably, thought they were watching a studio-inspired stunt.

Some celebrities, such as Jim Carrey, did later denounce what Smith had done. But the standing ovation Smith received alone showed that Hollywood’s oft-touted moral bearings were, once again, awry.

Smith’s reputation may suffer from his action. Certainly, footage of the onstage encounter will be replayed on social media for years to come, reminding people of the person Smith has shown himself to be. A tear-streaked Smith may find he cannot quickly distance himself from a physical attack on a comedian—whose job it was, after all, to tell jokes and poke fun.

But The Slap has also confounded Hollywood, complacent in its moral confidence and habitually smitten with the stars it has created. Time will tell whether the media companies and advertisers, so quick to call for the cancellation of those who have done far less than Smith, now have the moral fortitude to censure one of their star-studded own.