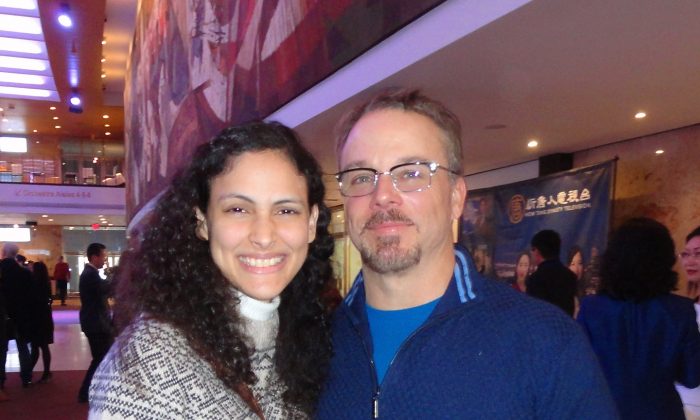 TORONTO—In the city some see as Canada’s economic engine, business people abound and on Sunday afternoon many came out to see classical Chinese dancing with universal values.

It’s not so much a message as the essence of a culture that dates back 5,000 years, when art, literature, music, and dance were all divinely inspired. Reviving this culture is the founding mission of Shen Yun Performing Arts, which staged its last Canadian show of its 2015 world tour at the Sony Centre on Jan 25.

Keldon Drudge, the CEO of a small firm that does derivative valuations, brought his two daughters to see the performance.

“The athleticism of the dancers was really outstanding and I thought that the costumes were extremely beautiful.”

“And the music of course—it was beautiful. Everything worked very well together.”

China’s traditional culture was rooted in principles like reverence for the divine, compassion, and propriety and justice. Many of Shen Yun’s dances are based on stories from China’s rich history, as well as literary classics and famous legends.

Mr. Drudge didn’t recognize any of the stories in the performance, some of which are very famous in China but relatively unknown elsewhere. They are tales of courage, or heroism in the face of corruption, or good overcoming evil, oftentimes with the help of divine intervention.

“They carry you away. They’re quite lovely,” he said.

Shen Yun’s stories are filled with universal values that have meaning even today, he added.

“They’ll always be relevant as long as there are people,” he said.

“There are commonalities and legends from all around the world, and I think they were those things—courage and compassion and appreciation of beauty–all of those things.”

‘Such a Beautiful Culture’

Randy and Laura Williamson were there too. Mr. Williamson is the president of a construction business in Ohio and maintains a home in Toronto.

Shen Yun left him feeling happy and peaceful, he said. There were some things he would definitely remember.

“The dedication to getting everything just perfect and just the gracefulness and the peacefulness of it” was one example, he said.

Another was the fact that the world’s premier classical Chinese dance company can wow audiences in every country in the world, except for the one whose culture it is trying to revive.

“That it’s not allowed in China is really kind of moving. It’s hard to understand that. So it’s an eye-opener I guess.”

“I just didn’t think that that was going on in China still.”

Shen Yun’s performance is rooted in the virtues espoused by China’s three religious: Confucianism, Buddhism and Daoism. These beliefs formed the bedrock of Chinese society but were also seen as the greatest threat to communist ideology. Therefore, after the Chinese Communist Party came to power in China in 1949 it carried out a series of campaigns to extinguish the original beliefs, culminating in the Great Cultural Revolution in the ’60s and ’70s.

Laura Williamson said she was stunned by the performance. She is now an illustrator and graphic designer, but is also a soprano and was once a singer of some acclaim who performed in productions of West Side Story, Les Miserables, Fiddler on the Roof, and more.

“I loved it,” she said. “I gasped, I smiled, I laughed at some of the parts; it was funny. It is beautiful, amazing.

It is the kind of reaction people leaving the theatre that afternoon shared; others interviewed by the Epoch Times had similar reactions, some also contemplating the deeper qualities of the performance.

“It’s just fantastic, its amazing, it’s emotional, It’s the kind of thing that you really want to come and see just to appreciate it.”

He saw lessons of compassion in the show, values that had meaning in the modern world.

“It makes you think about things before you do them so you don’t do the wrong thing,” he said.

New York-based Shen Yun Performing Arts has four touring companies that perform around the world. Shen Yun’s International Company wrapped up its Canadian tour in Toronto on Jan. 25. As part of its extensive tour of the U.S., Shen Yun will perform in Detroit from Feb. 5-8. For more information, visit ShenYunPerformingArts.org.