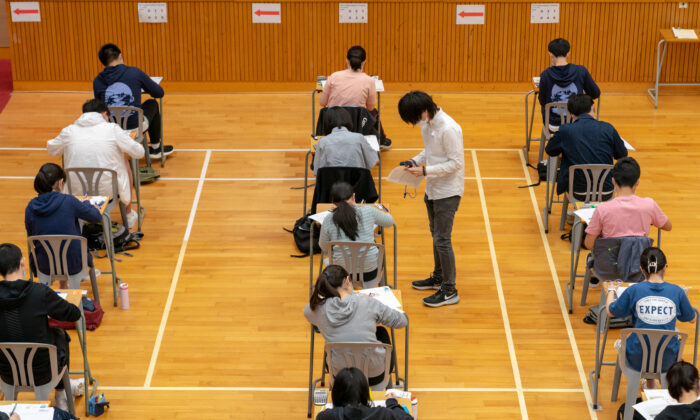 Students in the HKDSE Public Examination in Hong Kong. (HKEAA)
Thinking About China

Some History teachers wished, that this year, the Hong Kong Diploma of Secondary Education (HKDSE) history examination, which took place last Saturday (May 14, 2022), could have returned to normal, after the examination questions last year deviated a lot from those of previous years.

I told them this was only wishful thinking, as Iris Luk, my successor at the Hong Kong Examinations and Assessment Authority (HKEAA), has a mission to ‘scrape the bone of poison’ and put a stop to History as a subject that encourages thinking and discussion—an inherited quality of liberal arts education but is now a taboo in the New Hong Kong, as political correctness becomes the foremost criterion. In other words, the History exam is doomed to follow the new tradition that started to take shape last year.

The History exam follows the path of the new core subject, Citizenship and Social Development (CSD), which is to replace Liberal Studies. CSD limits students’ perspective, merely allows official views, emphasises civil responsibility and covers nothing on civil rights. CSD manifests the new goal of ‘castrated education,’ and the History exam this year best illustrates how this liberal arts subject becomes another victim. Like last year, the exam set no questions on the political history of Hong Kong and China; the only question that mentions China’s ‘political development’ requires candidates to merely elaborate a given view on China’s modernisation and allows no room for discussion. This is a reversal of History’s traditional question setting strategy, which emphasises critical thinking. It sends an unambiguous message to all History teachers and students that, at least in the political history of Hong Kong and China, History no longer allows thinking and reflection, and history may only be studied and written according to the official views. The exam will never ask again, ‘do you agree with’ a given view in the above fields. The many ‘red lines’ (forbidden areas not stipulated in laws and regulations) have purged critical thinking from the subject, and History needs to put ‘red’ before ‘expert,’ a reality that has overwhelmed the educational field.

As thinking and reflection have become a kind of ‘original sin’, setting easy questions is the only way out. Some exam questions (especially the essay-type questions) are copies from classroom exercises. The data-based questions, which are supposed to present some challenges to candidates using unseen sources and questions, are no better. For example, question number 1, uses a postcard published during the Russo-Japanese War 1904-05, in which U.S. President Theodore Roosevelt stood between the Meiji Emperor and Tsar Nicholas II, to mediate. The question that follows is simple: ‘the role played by the U.S.A in the War,’ a study point about the War that no student can have missed. Obviously, the source in the exam paper is just another form of factual recall rather than anything new that may inspire candidates to think. Instead of setting challenging tasks with unseen sources so that candidates can conduct authentic analysis and make meaningful arguments, the Moderation Committee set textbook-style questions that require minimal thinking and encourage recall from memory. After the exam, teachers and candidates almost unanimously commented that the exam was easy; this is equivalent to accusing the Moderation Committee that, by making all questions with zero controversy, has given up the skill-based assessment tradition. As the exam system is increasingly migrating towards norm-referencing, grading can still be done no matter how questions are set, only that those awarded the best grade may be due to excellent factual recall rather than analysis skills.

It is an accepted moral standard that when setting an exam paper, the extract of source and the related question should not contravene the original. However, two such cases are found this year. Source F of Paper 1 talks about Anglo-German relations after the 1911 Agadir crisis, coming with a question that asks, ‘what obstacle hindered an improvement in Anglo-German relations after the Agadir crisis’. This looked fine until I managed to locate the original, which is an article entitled ‘Détente and Deterrence: Anglo-German Relations, 1911-1914,’ in International Security (Fall 1986). The author Sean M. Lynn-Jones states explicitly that ‘relations between Great Britain and Germany improved between 1911 and 1914 and that this improvement contributed to the outbreak of the war.’ (the détente gave a false impression to both countries that future conflicts might be settled through peaceful means, and they missed the best time to mediate the conflicts right before the First World War). Obviously, the exam question and the extract contravene the original’s argument. Another example is Source H, which is a speech by Barber Conable, President of the World Bank in 1989, and the exam question asks about the ‘two purposes of the speech.’ Instead of merely discussing population issues as appears in the extract, the original—as I managed to locate—actually talks about ‘the linkages between the environment, population, and sustainable development,’ and it invites the audience to ‘recognize our collective responsibility to maintain a healthy ecosystem on this planet.’ Suggested answers in the unreleased marking scheme will contravene the original if they show remarkable deviation from it.

Political correctness concerning China continues to prevail. Source D in Paper 1 is a table of Hong Kong population in 1991, in which the place of birth ‘China’ was changed by HKEAA to ‘The Mainland’—the two do not convey the same meaning and it may cause confusion as this generic term has a number of possible connotations. In addition to ‘mainland China’ as it intends, it could also mean, for example, the U.S. mainland. As far as I know, the education officials think that the original, which lists both Hong Kong and China as places of birth , hints at Hong Kong independence. Some may regard ‘mainland China’ a better alternative, but according to such officials (who have mentioned the following point to me before), ‘mainland China’ implies the existence of more than one China. Therefore, this term is seen as violating the One China Principle, and must not be used.

History as a liberal arts subject requires room for designing quality questions to test critical thinking, but starting from last year, political influence under the New Hong Kong has caused irreversible changes to History and other humanity subjects. When I was still in HKEAA, my boss put huge emphasis on ‘whiter than white’ as a maxim for us. It was not until now that I can fully understand its meaning—‘redder than red.’