‘The Music Was Epic,’ Says Musician About Shen Yun Orchestra 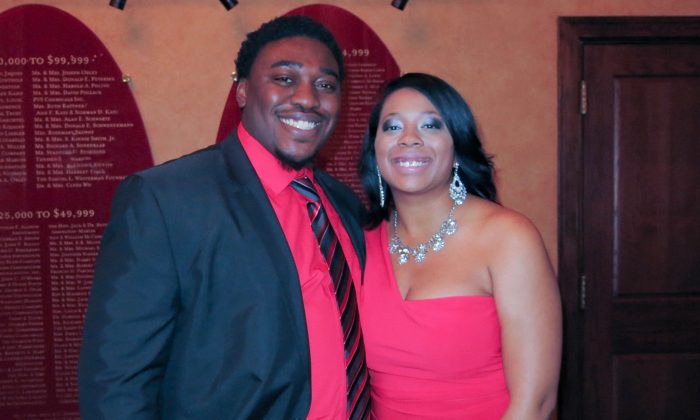 DETROIT—Shen Yun Performing Arts once again graced the Detroit Opera House with 5,000 years of traditional culture brought to life through the universal language of music and dance.

“The music was epic,” said Ricky Sykes, a piano player and full-time band member with Agape Nation. He was referring to the Shen Yun Performing Arts Orchestra. “It was amazing. It was a different experience,” he said.

With his musical background and her dancing experience in ballet and salsa they thoroughly enjoyed Shen Yun’s portrayal of 5,000 years of traditional Chinese culture.

The Eastern instruments “definitely had me in the atmosphere of relaxation, but it was like a roller coaster of my emotions, up and down like—wow,” said Mr. Sykes.

Ms. Horn loved the dancing. “The precision was amazing,” said Ms. Horn “It was great, amazing.” Each of the dances brought a smile to her face.

Mr. Sykes found Shen Yun to be a cultural learning experience: “It was an eye opener for me,” he said.

Another couple who attended the same performance as Mr. Sykes and Ms. Horn were as deeply impressed with the universal nature of Shen Yun.

The New Year’s performance of Shen Yun at the Detroit Opera House was the second time Jeff Baker had seen Shen Yun. The first time was in Washington D.C. Mr. Baker is Manager of Consumer Directed Healthcare with Blue Cross and Blue Shield, and he and his wife Jessica Baker, a stay-at-home mother of two, deeply enjoyed the universal appeal of the spiritual nature of traditional Chinese culture.

“Shen Yun at first glance is sophisticated dance techniques, an orchestra joining instruments from both the East and West, beautiful costumes, and a stunning back drop. But digging deeper, one discovers a sea of traditional Chinese culture,” states the Shen Yun website.

This tradition is said to be divinely inspired and with that come the morals and values of this 5,000 year-old culture. “Principles such as benevolence and justice, propriety and wisdom, respect for the heavens, and divine retribution, all come to life through Shen Yun’s dance and music. The culture originates from the ideals of Confucianism, Buddhism, and Taoism”, states the Shen Yun website.

“It was really nice,” said Mr. Baker. He deeply resonated with the spiritual nature of the story-line shown in the dances as well as the vocalist songs. He found similarities between traditional Chinese culture and morals and principles he finds relevant today.

Mr. Baker was impressed with how Shen Yun portrays the culture without even saying much. “They didn’t have to say a lot but you really could feel it.”

This can be explained by the long history of thousands of years of classical Chinese dance. According the Shen Yun website. “It was passed down continuously within the imperial palace and ancient Chinese theater and opera. Soaking up profound wisdom from every era and dynasty, it has become a complete system of dance embodying traditional aesthetic principles with its unique dance movements, rhythms, and inner meaning.”

When his daughters are old enough he would like them to see Shen Yun so they may be exposed to a different culture and learn more about themselves.