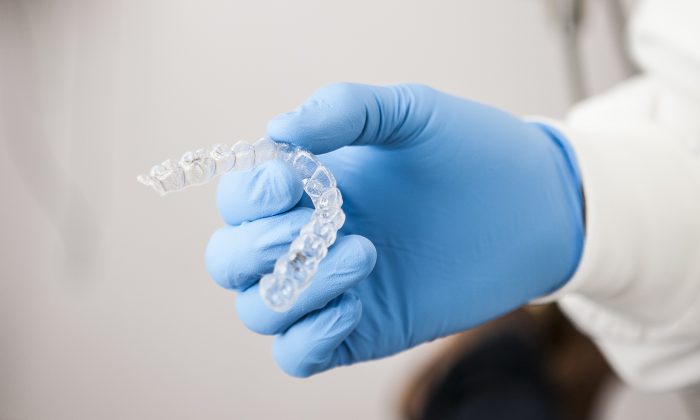 The Ins and Outs of Invisible Braces

NEW YORK—When you saw them on camera over the past several years, you probably had no idea that Oprah Winfrey, Justin Bieber, and Khloe Kardashian were getting their teeth straightened. That’s because they were using the nearly invisible tooth-straightening technology called Invisalign.

Invisalign uses a series of clear plastic trays, called alignment trays, worn on both the upper and lower teeth.

With computer modeling technology, Invisalign calculates the precise shape each tray needs to be to gradually shift teeth into the desired position.

Ideally the trays, which look exactly like the retainers people wear after having braces, are worn for 22 hours a day and only removed while eating or for cleaning.

Treatments require a new tray every 2–3 weeks as the teeth move, millimeter by millimeter. In total, treatments typically last from less than a year up to two years—but since the trays are removable it can be tempting to take them out, which can lengthen the treatment time.

“The hardest part for a lot of people is that it cuts down on the snacking,” said Dr. Wu, a board-certified orthodontist who works at New York Smiles Dental in Manhattan. Dr. Wu has over 10 years experience with Invisalign.

“A lot of people want to snack, have a little something here and there,” he said. But when they’re wearing Invisalign, they have to take the trays out every time a morsel of food passes their lips, and brush their teeth and tray before putting it back in.

It is recommended to always carry a small case to put the trays in when you take them out because losing the trays is an issue for many people, and it’s easy to accidentally toss them out with the lunch garbage if they’re sitting on a napkin.

The biggest draw of Invisalign is of course that it’s practically invisible—unless you are really looking, you would never notice someone is wearing them.

The most visible part for most people are the attachment buttons—very small pieces of tooth-colored filling material that are glued to the teeth to help hold the alignment trays in place. The buttons usually go on the first pre-molar (fourth tooth from the center line), Dr. Wu said, so they are not conspicuous.

Convenience, cleanliness, and comfort are the other big draws for people, Dr. Wu said.

Each tray is worn for about two weeks, and patients usually get three or four trays per visit, which means they don’t have to return for six to eight weeks, unless they lose or break their trays, Dr. Wu said. With braces, patients typically come back every four weeks.

“We just have to … check up on them that they’re wearing their trays and that there are no fitting issues,” Dr. Wu said, adding that in his experience, the trays most often fit very well.

With Invisalign, people can take the trays off and brush fairly normally and there is “very little impact on their lifestyle,” he said. With braces, cleaning is more challenging.

“A lot of people find it difficult to really maintain their teeth well when they’re in regular braces,” Dr. Wu said.

Last year Invisalign came out with a new, softer material that still has enough strength to move the teeth.

The old material was very stiff and could make the patient’s mouth feel painful for the first couple days, Dr. Wu said. “But now the material is more comfortable … a lot softer than it used to be but still has the same effect. It moves the teeth probably better, more efficiently.”

The most common misconception, he said, is that Invisalign can straighten anything, and people also underestimate the work involved in cleaning them.

The technology also does not work as well as braces if people’s teeth are really crowded, are missing, or need to move more than about 4 millimeters, he said.

He advises that for some people the treatment might take four to five years, in which case it may be faster to go with traditional braces.

“People look at the commercials and they feel like ‘Oh, it’s so effortless’ to wear them.”

“Even though it’s not a lot of work to put the trays in and take them out, people do burn out after three years, [or] four years,” he said, with some giving up on treatments.

A retainer is required after treatment to keep the teeth straightened. Most people wear a retainer full time for a year after finishing treatment, and then just at night after that, Dr. Wu said.

Invisalign technology is constantly evolving, and the company holds specialized training and certification for dentists, Dr. Wu said. He attends three or four classes a year to keep up with improvements in the system.

“There are a lot more little, subtle changes, a lot more information … and little techniques that you need to be aware of [as a dentist].”

Experience is key to good treatments, Dr. Wu said. He advises patients to ask a dentist how many treatments he or she has done, whether he or she has worked on similar issues, and what the results look like.

What You Should Know

Although some small things are more difficult than they expect, overall, wearers who blog or make videos are happy and say the sacrifices are worth the gains.

Lisp
You may lisp for a day or two after putting in a new tray.

Buttons
There’s mixed reaction about the visibility of the attachment buttons. Some wearers say they are more visible than they thought they would be. They can also be too sharp and cut the inside of your mouth, so don’t be afraid to ask your orthodontist to file them down a bit.

Tooth Filing
Very crowded teeth may need to be filed down. This is called IPR, enamel reduction, or shaving.

Yellowing and Odor
The alignment trays get yellow and can start to smell with use if they are not cleaned properly. Some people also report the glue that holds the buttons on becomes yellow, but this is only temporary and can be fixed when the buttons are removed.

Gaps
Some people develop gaps in their back teeth as they shift. These may not be permanent, so talk to your orthodontist about what to expect.

Outie Hooks
A plastic device with a hook on one end and a lever on the other can help you remove tight trays. Look for them on Amazon.

Remove Trays in the Bathroom
Saliva comes out with the trays so you either have to slurp it in or deal with a ribbon of drool—best if dealt with over a sink.

Doc Shop
Personality and price are important factors, so don’t be afraid to have consultations with a number of different orthodontists before settling on one. These consultations are often free.