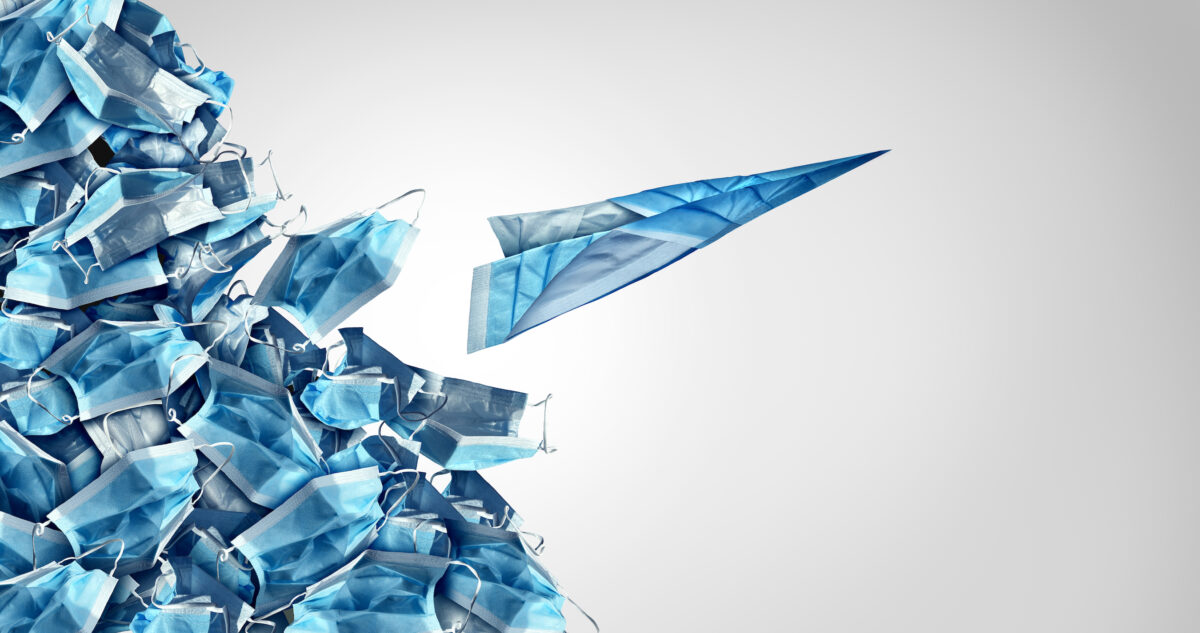 Masks are no longer required on US airlines or on domestic flights.

Of course, this fantastic development did not come about because the CDC had a change of heart after repeatedly extending their illegal mandate, but due to the courage of a federal judge in Florida.

Whether out of incompetence or fear of being criticized for not taking COVID seriously, what we’ve seen from the courts over the past two years has been nothing short of adoring fealty to “public health.” Finally, someone within the court system showed their willingness to contradict the all-powerful CDC and stand up for the separation of powers.

Airlines immediately ended mask mandates, leading to scenes of celebration onboard, as passengers were freed from the useless theater:

The end of the #maskmandate has this plane singing

🎶 Throw away your masks 🎶 pic.twitter.com/BvvCNLE6Ts

And predictably, wailing and gnashing of teeth ensued from our nation’s foremost authoritarian, Dr. Anthony Fauci.

Fauci decried the judge’s decision upholding the rule of law and separation of powers as “unfortunate,” stating that the judge had “superseded the authority of the CDC.”

In maintaining that the decision should have rested with the CDC and not the judiciary, Fauci once again showed that he has no respect for anything that gets in the way of his desire to control the behavior of others.

And while he’s perhaps the worst offender, he’s not alone in his obsessive authoritarian streak and ignorance of the overwhelming amount of data showing masks to be ineffective.

Newsweek quoted an “expert” from Columbia who helpfully summarized the prevailing sentiment among the delusional public health authority class after the end of the mandate:

John P. Moore, professor of microbiology and immunology at Cornell University, told Newsweek that he thinks Mizelle’s ruling “will surely be appealed and overturned.” He added: “Wearing a mask is a basic, common sense safety precaution that is extremely easy to do and only minimally inconveniences people.”

It’s remarkable that no one asks Moore the obvious follow up questions:

And of course, one of CNN’s most incompetent talking heads (though it is a remarkably tough competition) chimed in with his predictions:

Many, many others lost whatever infinitesimal grip on reality they had left, making absurd analogies and comparisons to overwhelming praise from the unhinged masses of misinformed activists:

Not one of these serially uninformed individuals seem remotely aware that during the winter months, airlines were cancelling thousands of flights because they couldn’t staff their planes due to COVID cases.

In December, United had to cancel hundreds of flights in a week due to COVID-related staffing shortages:

United Airlines (UAL) said last week it had to cancel hundreds of flights because it lacked enough crew members to safely fly all of its scheduled routes.

“The nationwide spike in Omicron cases this week has had a direct impact on our flight crews and the people who run our operation,” said a United memo obtained by CNN.

While it’s impossible to determine if the spread originated from planes or off, tens of thousands of flights were cancelled in just a few weeks.

An article from January 8, 2022 in the Washington Post explained the “epic travel meltdown:”

Like thousands of passengers who planned holiday trips, Leonard became caught in an epic travel meltdown in its third week that has forced the cancellation of more than 28,000 flights since the first signs of trouble on Christmas Eve

So we know that with masks required on planes, airlines were absolutely hammered by COVID cases — so much so that they couldn’t safely operate flights and had to cancel thousands of routes.

This is exactly what the “experts” predicted would happen to flights after the end of masking. The dramatic, sudden, “terrifying” end of mandates would cause an immediate surge of cancellations that would roil the industry.

Last week, CNN “expert” Jonathan Reiner said that he expected a “bunch of cancelled United flights” this week due to the removal of masks on planes

Well according to FlightAware, United cancelled 1% of flights yesterday & 0% so far today

It’s hard to be more wrong than expecting “a bunch” of cancellations from a specific airline and seeing the real rate come out at 0-1%.

But that’s just United, let’s check how it’s going for the rest of the major US carriers:

Yesterday, May 1st, cancellation percentages were as follows:

For Sunday, the average cancellation percentage for those six airlines was 1%.

So far today, it’s 0.33%, and a grand total of 52 flights have been cancelled out of thousands of scheduled trips.

Another easy method to check if flights have been cancelled en masse is to visit Google and check for recent news reports. So I did:

Lots of results from December, January, and early April, but nothing from the past few weeks.

Reminds me of viral misinformation from Patton Oswalt and CBS:

Oswalt, of course, failed to mention that the article clearly states that British Airways specifically said their cancellations were not due to COVID absences, and also mentions United’s massive staffing issues from December and January when mask mandates were in effect.

You can almost smell the desperation from news organizations and celebrities. They’re willing to lie with select headlines and misrepresent reality to get their clicks and views from the mask religion.

The lack of these types of “stories” over the past few weeks speaks volumes though, doesn’t it?

At the first sign of airlines having trouble staffing or operating flights, the news media and the blue check cheerleaders of misinformation on Twitter would have gone absolutely ballistic with coverage.

But there is none. Because it’s not happening.

Flights aren’t being cancelled at abnormally high rates, if anything cancellations appear to be below normal. Air traffic is UP 5% in the past week, according to FlightAware.

Ending the mask mandate on planes, with no permission from the delusional zealots like Fauci, Jonathan Reiner and Jeremy Faust, did not lead to a dramatic surge of crew related infections, because masks do not work. They never have, and they never will.

These supposed “experts” are nothing more than political activists with credentials, who have realized that there is a tremendous amount of power, influence and money available to those willing to appeal to the fears, anxieties, and religious needs of the modern left.

It’s the same story when looking at broader community transmission:

Mask compliance doesn’t matter, because masks don’t work. We’ve seen this pattern play out time and again, as data from cities like New York have proven that exceptionally high compliance doesn’t lead to better outcomes, dips in compliance are irrelevant, and even now New York far exceeds the US average case rate.

The supposed “experts” who claimed the airline industry would be undergoing massive turmoil never had the slightest chance of being right, because masks don’t work.

Somehow though, I doubt the new Ministry of Truth will be coming after them for their “disinformation.”

Michael Senger
Follow
Michael P. Senger is an attorney based in the United States and author of “Snake Oil: How Xi Jinping Shut Down the World.” He has been researching the influence of the Chinese Communist Party on the world’s response to COVID-19 since March 2020, and previously authored “China’s Global Lockdown Propaganda Campaign” and “The Masked Ball of Cowardice” in Tablet Magazine.
SHARE
Friends Read FreeCopyFacebookTweet
You May Also Like