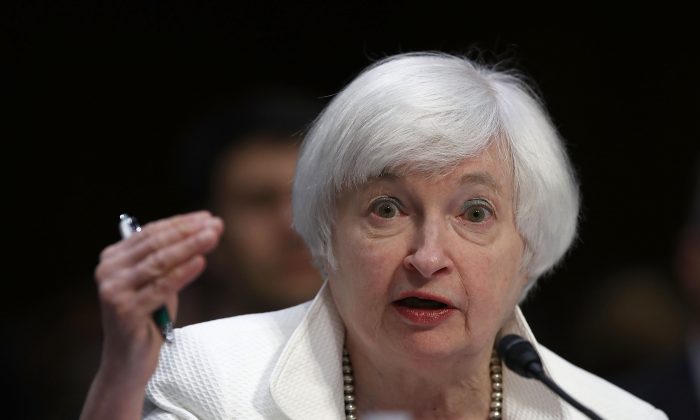 Brexit has played out, financial markets are in good shape, the U.S. economy is strengthening, but inflation still lags. A pick-up in inflation is the single most important improvement the Fed needs to raise interest rates.

“Near-term risks to the economic outlook have diminished,” said the Federal Open Market Committee (FOMC) in its July 27 statement. The FOMC held the fed funds target range at 0.25 to 0.50 percent, while upgrading its assessment of the U.S. economy.

Given that the U.S. economy is basically at full employment and inflation remains very low, the traditional inverse relationship between the two variables—the Phillips Curve—has broken down.

Research from the International Monetary Fund (IMF) shows that a 1 percent decline in unemployment only nudges core inflation up 0.1 percent over the next two years—hardly much of a relationship at all. The environment of weak global growth is keeping inflation low even though the U.S. labour market is hot.

But the Fed may not be as married to the Phillips Curve as they have been in the past, says Millan Mulraine, TD Securities’ Deputy Chief U.S. macro strategist.

He recalls last December when the Fed hiked for the first time in nearly a decade, the view was that a strong labour market will push up wages, which will result in higher inflation. That hasn’t happened.

The U.S. Federal Reserve’s narrative on inflation has changed very little in 2016. It’s a murky outlook predicated on hope that “transitory” factors that dampen inflation wear off and the labour market keeps improving.

“They wouldn’t acknowledge a recession if one is staring them straight in the face,” Mulraine says. “They would never forecast a recession. It’s the same thing for inflation. As an inflation-targeter, I think that they will remain wedded to the hope that inflation will move back to target in the medium term.”

The Fed has a dual mandate—maximum employment and 2 percent inflation.

“They don’t have to get to the [inflation] target itself, but they have to believe that they are in a position to move toward that target,” Mulraine says.

They don’t have to get to the [inflation] target itself.
— Millan Mulraine, TD Securities

He points to falling core prices of goods being exported to the United States from China, Canada, the euro area, and Mexico, as well as the strengthening of the U.S. dollar, which has reduced non-oil import price inflation. This has resulted in falling U.S. domestic core goods prices.

It looks to be the proverbial mountain for the U.S. economy to climb to reach the 2 percent inflation target.

“It would take the combination of a depreciation of the U.S. dollar, a continued decline in the unemployment rate, a pick-up in house price inflation, and rising wages in the health sector [which has a large weight in core inflation] to generate inflation much above 2 percent,” said Abdih.

“The key driver of the inflation process in the U.S. are wages and wages fuel labour costs,” Gregory says. “And labour costs are the most important component of the services side of the economy.” Services make up the largest part of the U.S. economy.

“Disinflation abroad will act as a bit of a break or a headwind against accelerating inflation in the U.S.,” Gregory says.

Record Highs for US Stocks Not at All Irrational

What the Fed doesn’t want to see is inflation expectations becoming unanchored, heralding a threat of deflation. If consumers and businesses feel prices are going lower and they put off their spending in anticipation, it creates a downward spiral leading to falling wages.

On a positive note, June’s consumer prices increased 0.2 percent. In its June economic projections, the Fed expected to reach the seemingly mythical 2 percent target in 2018. But Mulraine thinks that’s unlikely.

“They will probably keep that two-year horizon, so every year you’re going to see that it’s two years away and that’s probably the best you can expect from them,” Mulraine says.