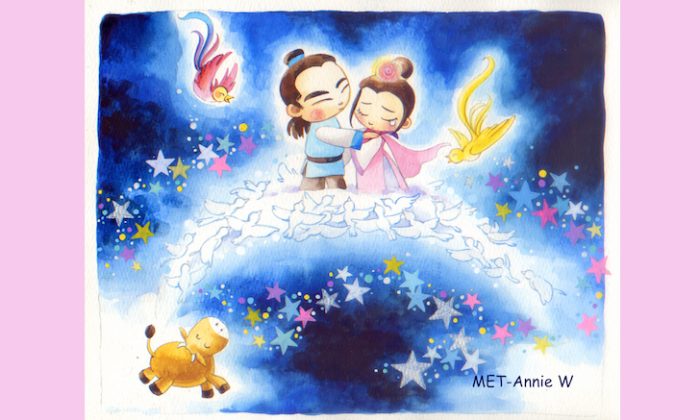 On the night of the 7th day in the 7th month, Niulang and Zhinu can travel across the Milky Way over a bridge formed by magpies for their once-a-year reunion. (Annie Wu/Epoch Times)
China

The Qi Xi Festival (七夕節, qī xī jié) is an important traditional festival in China. Literal to the name, it always falls on the seventh day of the seventh month in the Chinese lunar calendar, so Chinese people also call it the Double Seventh Festival. This year, the festival falls on August 2.

The Origin of the Festival

The Qi Xi Festival sprang from a legend that has been told in many ways from one generation to the next since the Han Dynasty (206 B.C. – A.D. 220). It is the beautiful love story of cow herder, Niulang (牛郎), and the fairy weaving maid, Zhinu (织女).

Niulang, the cow herder, was a kind, honest, and hardworking young man. He was orphaned as a child and later was driven out of his home by his sister-in-law. So, he lived by himself tending a cow and farming on the hillside. His only companion was the old cow.

One sunny day, Niulang left his humble home for the fields, accompanied by his cow. When they passed a nearby lake, he was surprised to find seven heavenly maidens bathing and playing in the lake.

He was stunned by their beauty so he hid behind some bushes, watching their play. His eyes eventually fixed on the youngest one.

Suddenly, the cow spoke to Niulang. “She is the youngest of the seven daughters of the Heavenly King,” it said. “Her name is Zhinu. If you take away her robes, she will not be able to return and she will stay with you.”

When the playful maidens were ready to leave, Zhinu could not find her robes that would allow her to return to Heaven. In order not to miss the timing of their own return to Heaven, her sisters had to sadly leave her behind.

Poor Zhinu was left all alone. She felt so hopeless that she started to cry.

Niulang could not bear to see Zhinu in tears. He regretted having taken her robes and making her cry. So, he stepped out from the bushes and handed them to her.

He sincerely apologized for his transgression. He also confessed that he was overwhelmed by her beauty and that he wished she could be his wife.

Zhinu was very surprised to see Niulang, yet, she saw him as a kind and handsome man. Moreover, she was attracted by his compassion and honesty. Since she could not return to her home in the heavens, she agreed to be his wife.

Niulang and Zhinu lived a happy life together. Niulang looked after the cow and worked in the fields while Zhinu wove many beautiful things at home. Soon, Zhinu’s handicrafts were well known and people came from far away to buy them.

A few years passed, and they had two children, one boy and one girl. Niulang and Zhinu loved and respected each other and they worked hard to take care of their family.

Though years had passed on Earth, it had been just a short time in Heaven. The Heavenly King and Queen soon discovered that their youngest daughter was missing.

The Heavenly Queen was angry that Zhinu had breached heavenly conduct and had stayed on Earth and married a mortal. She sent celestial soldiers to bring Zhinu back.

The old cow knew what was going to happen and warned Niulang: “Listen, I will die soon. After my death, you should quickly skin me. If you put on my hide, you and the children can fly up to the sky.” After these words, the cow died.

Niulang grieved over the cow’s death. Still, he followed the cow’s advice and skinned it, and then he buried the cow beside a tree near his house.

Just as he went back into the house, the sky suddenly became dark and the wind started to roar. The heavenly soldiers appeared, rushed into the house, and took Zhinu away.

Alas, Zhinu could not free herself and looked back at Niulang and the children in tears.

Recalling the old cow’s advice, Niulang quickly put on the cow’s skin, put the children in two baskets to carry with him, and then ran after Zhinu. He ran as fast as he could and the distance between him and his wife seemed to get shorter and shorter.

Just at the moment when he was about to catch up with his wife, the Heavenly Queen took out one of her gold hairpins and made a stroke between them.

Instantly, a billowy river sprang into being and separated them. That river later came to be known as the Milky Way.

From that day on, Niulang and Zhinu were separated from each other on the two banks. Zhinu was on one side of the heavenly river and Niulang and their children were on the other side.

Day after day, with tears in their eyes, they looked at each other across the broad, starry river and longed to be by each other’s side.

The Heavenly Queen was eventually moved by their deep love for each other, so she allowed them to meet once a year. That was on the seventh day of the seventh lunar month.

On this night each year, a huge flock of magpies comes and forms a bridge with their bodies over the heavenly river. It is only on this night that Niulang and Zhinu can travel across and be together.

On this enchanted night, when the sky is dotted with stars, people can see the Milky Way spanning from the north to the south. There are two especially bright stars on each side of the Milky Way. The star Altair is seen as Niulang and the star Vega as Zhinu.

The Double Seventh festival is in mid-summer when the weather is warm and the grass and trees are at their verdant best. If you listen carefully, you may hear the murmurings of Niulang and Zhinu expressing their love and longing for each other.

There are many variations of Qi Xi Festival celebrations in China. The most popular custom for the festival is that, on the evening of the seventh day of the seventh lunar month, women and girls pray for more dexterous and skillful hands.

Since the Han Dynasty, threading needles as fast as possible in the moonlight has been the longest standing activity used to attract blessings for greater skills. The one who can thread the most needles in a minute is acknowledged as the one to be the most skillful in the future. In Hong Kong, young women display their needlework and make offerings under the night sky.

Traditionally, young women would pray for beauty. Particularly, on this night they would ceremoniously wash their hair in a rite of beauty.

The day was also given great importance for young women to worship Zhinu. Activities are organized in advance by several close sisters. They usually prepare a table with tea, wine, longans, red dates, nuts, melon seeds, and other snacks. The young women sit around the table and do beautiful needlework to show their fine skills. They also look toward the star Vega and pray for a good husband and a happy life.

In some areas, young ladies build colorful “shrines” made of paper, fresh fruit, and flowers as a tribute to the eternal love between honest Niulang and pretty Zhinu.

Fruit carving is another festival tradition. On this day, as another way to show dexterity, one can find flowers and birds intricately carved from different fruits. The smooth skin of various melons makes them ideal fruit for carving.

Many women will make qiaoguo at home or in a group. First, they put sugar into a pot and boil it into syrup, and then they add flour and sesame seeds. When the mixture becomes a soft dough, they put it on the table and roll it into a thin sheet. This is cut into rectangles or spindle-like forms. They fold the pastry pieces into different shapes and fry them until they turn golden yellow.

Celebrating the birthday of cattle

In honor of the legendary cow that sacrificed itself for Niulang and Zhinu, in some rural areas, children pick bunches of wild flowers and hang them on ox horns. This custom of celebrating the “birthday” of cattle is to commemorate the compassion of the cow.

No matter the region or the traditions, in the evening, families clean yards, set tables with qiaoguo, lotus roots, lotus seeds, and other foods, and sit together to watch Niulang, as Altair, and Zhinu, as Vega, “meet” in the sky.

The Double Seventh Festival is a day to express devoted love so it is often referred to as the Chinese Valentine’s Day. Unfortunately, except in some rural areas, the traditional customs for the day have been weakened or abandoned in mainland China.

Nowadays, younger Chinese are often unfamiliar with the origin of the Qi Xi Festival and the traditions of this Chinese Valentine’s day, and are more likely to celebrate the western Valentine’s Day on February 14.

However, the love story of Niulang and Zhinu has taken root in the hearts of the Chinese people and, in most of Asia, it is a well-known reminder of true devotion.