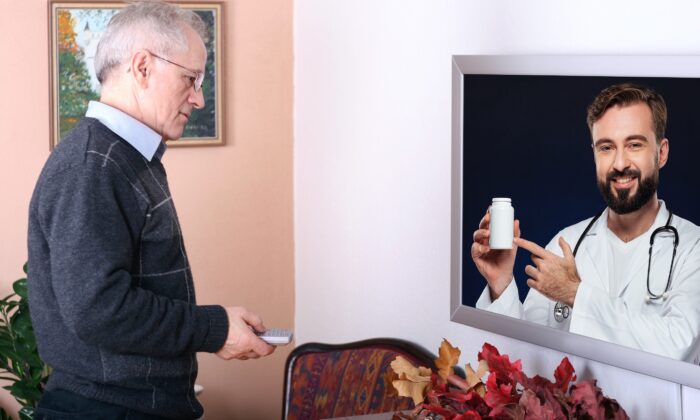 The goals of advertisers are not the same as the goals of quality physicians. (Sakala/Dean Drobot/Shutterstock)
Mind & Body

The Cost of Selling ‘Hope’

We’ve all seen those commercials in which some actor playing a patient with a serious medical condition such as Crohn’s disease, diabetes, or even lung cancer is smiling after receiving a new prescription medication. He or she is saying how great they feel, and we see them walking hand-in-hand with their spouse, sun shining, birds singing. Then the announcer rapidly fires off the side effects and risks for this new medication. The tagline is “Ask your doctor if ‘acme’ drug is right for you.” I want what she’s having!

According to Statista 2021, “The entire pharmaceutical industry spent 148 million US dollars on TV advertising” in March. That was for one month alone!

The underlying problem with DTCA is that life-altering health discussions, which should take place between the patient and the physician, are now taking place between the TV or computer screen and the patient. It’s really just a one-way sales pitch. Not everything we see on TV or the internet is true.

Forbes magazine reported in 2019 on findings of the Journal of American Medical Association that highlighted a disturbing trend that there was a 361 percent increase in DCTA budgets from 1997 to 2016, from 1.3 billion to more than 6 billion. The reason for this increase in spending is simple—it works!

The pharmaceutical industry claims it benefits patients by increasing awareness, removing any stigma for that particular disease, and allowing patients to take control of their health. That would be true if the ads weren’t so misleading in promising a whole new life in a pill. I have respect for the American pharmaceutical industry’s ability to find new therapeutics, and greatly appreciate just how much it costs for research and development, as well as how valuable those medications are to patients in need. We have amazing new medications that are truly life-altering in their ability to treat so many serious medical conditions. When you have something so good, there’s no need to exaggerate the benefits, let alone hide the side effects as some of these DTCA ads do.

More than 10 years ago, I had a meeting with a formerly very powerful congressman. He was very kind and respectful but had no desire to fight against such DTCA advertising. The lobby is just too strong. This is a hard battle to fight.

Many physicians and patient advocates find more harm than good from DTCA. I am one of those physicians.

The two main points of contention are disinformation and drug overutilization. Some DTCA may omit crucial information, such as lifestyle causes of a disease, or hide important facts in the fine print.

There’s also the concern for the increased cost to the patient. There may be bio-equivalent generic medications with the same efficacy as the brand name that cost much less. These big pharma ads are appealing in a very seductive way, convincing the patient that they need that particular drug being advertised. The ads offer compelling offers of giving the patient back their power and control over life.

Meanwhile, DTCA can strain the patient’s relationship with their physician and other providers. The patient may question the physician as to why he or she never told them about this drug they saw on TV. Another interesting thing about DTCA advertising is the visual imagery of the benefits, such as the happy patient smiling and playing with his or her kids as opposed to the verbal messages of risk information presented rapidly by the narrator. Visual wins over narrative in an advertising world. It may be smart advertising, but it’s not good medicine.

Remember Vioxx (rofecoxib, Merck)? Vioxx was heavily promoted by DTCA from 1999 to 2004. Merck spent more than $100 million per year with annual sales of more than $1 billion in the United States. Patients were asking for Vioxx due to the successful marketing campaign. Merck voluntarily withdrew Vioxx from the market in 2004 due to increased stroke and myocardial infarction (heart attacks) from the drug.

It’s no wonder that as of 2018, the Edelman Trust Barometer stated that 62 percent of Americans don’t trust the pharmaceutical industry.

I believe DTCA doesn’t benefit patient care for prescription medications. There’s more harm than good. I have no problem with advertising for over-the-counter medications for allergies, colds, and headaches. But even here, the buyer must beware.

Some pharmaceutical companies have adjusted their approach to DTCA in a more ethical manner. One example is Gilead, which had a successful ad campaign using what’s called a disease awareness campaign (DAC). It encouraged people to get tested for hepatitis C without mentioning its product. These types of ads use a strategy to effectively educate people about a specific disease, remove the stigma of the disease, and actually help patient care. There is no direct “selling.” Sadly, very few drug companies are using this marketing technique.

The pharmaceutical industry is a revenue-generating business. I think we all understand and appreciate that. I have no problem with them making a lot of money if it will improve my patients’ health. I also understand it can cost more than a billion dollars to bring a mega drug to market. However, as physicians, we need to strive for the health and well-being of our patients first and foremost. I just wish pharma would do the same.

Someone once said, “Why are there never any good side effects? Just once I’d like to see a drug commercial that says, ‘May cause extreme awesomeness.’”