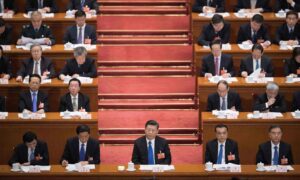 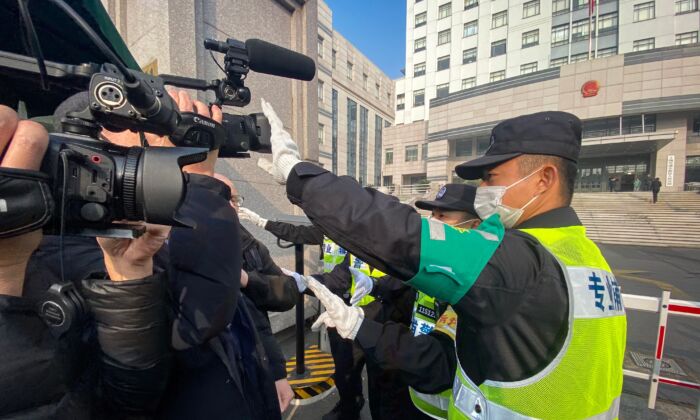 A policeman covers a camera to stop a journalist from recording footage outside the Shanghai Pudong New District People's Court in Shanghai, China, on December 28, 2020. (Leo Ramirez/AFP via Getty Images)
Chinese Regime

The Chinese regime removed court records from the online government repository amid celebrations of the communist party’s centenary anniversary to maintain a “facade of justice,” says a Chinese law expert.

China Judgements Online, an official online database of court rulings, has been taking down large numbers of documents that the website asserted were being “migrated” for “technical reasons.”

Cases concerning punishment for speech, death penalty verdicts, and the reprieve of a death sentence issued by the Supreme People’s Court have been taken offline.

The exact number of affected court records has been obscured to the public, but around 11 million have vanished in the past three months, according to The South China Morning Post.

A Beijing-based law expert, who gave the surname Zhang, pointed out that there was no legal basis for restricting public access to parts of the online government repository of court records, even temporarily.

He said a national database generally has a technical support team and a comprehensive maintenance system should have been built within the eight years it has existed.

China’s Supreme Court (SPC) launched the website on July 1, 2013 based on the Provisions of the Supreme People’s Court regarding the Issuance of Judgments on the Internet.

The SPC requires all court judgment documents to be published on the website, with a few exceptions, like information concerning national security and the support or guardianship of minor children.

Zhang is not optimistic about any kind of recovery of the data because the Chinese Communist Party (CCP) is “unpredictable,” he said, adding that the CCP has erased its history before.

“No one will be concerned about it as time goes by. Ridiculous things never end,” Zhang said in the phone interview.

Court records involving “picking quarrels and provoking trouble,” a common charge, under article 293 of China’s Criminal Law that the regime uses to target critics, have vanished from the website.

The Epoch Times search of the Internet using selected keywords related to the charge, including “Article 293 of the Criminal code,” “picking quarrels and provoking trouble,” “faking information,” “Twitter,” and “slandering,” did not yield any results from the official database.

Even high-profile judgments, like the case of Luo Daqing, are missing.

The Chinese student, who attended the University of Minnesota, was jailed for six months when he returned to China for posting an image of China leader Xi Jinping on Twitter, even though he was living in the U.S. at the time.

Zhang suggested the CCP is “sanitizing” the Internet, and “renovating” its appearance to maintain a “facade of justice” because of the regime’s centenary anniversary.

Everyone knows that Chinese people have access to those judgements, he said, but it would be “a slap in the face” if they were brought to light.

“Not only domestically, but international communists concerned about China have also found that China’s judiciary went wrong. Rotten to the Core,” he said.

Chinese citizens were punished for discussing authorities and the CCP, commenting on current affairs on social media platforms, or reporting people’s daily lives during the pandemic on Twitter, Facebook, or YouTube, and now even though those records are blocked in China.

The removal of judgment records was first reported by a China-based activist in February 2020. He claimed that a court record of punishment would not be available or accessible on the website once a case was in the spotlight.

The free speech activist has since started saving screenshots of each judgment related to a citizens’ speech. As of June, he has archived over 300 files.

The regime’s cover-up of suppressing free speech coincides with the whitewashing of the CCP’s history. The regime played down the crime of the 10-year Cultural Revolution in its new version history books.