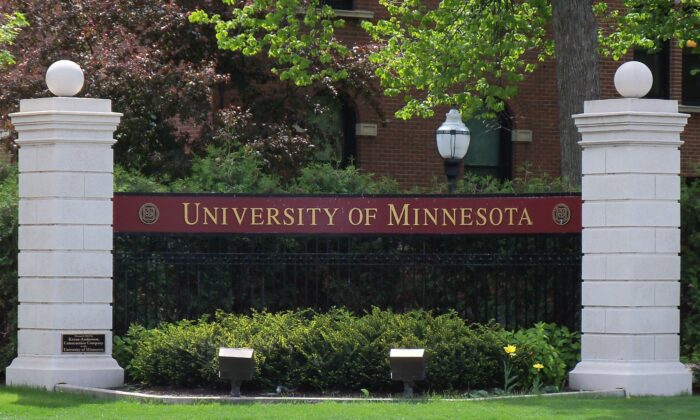 Entrance sign at the northwest corner of the University of Minnesota in Minneapolis, Minnesota, USA. (AlexiusHoratius/CC-BY-3.0/Wikimedia Commons)
By Cathy He

A University of Minnesota student was detained in China and sentenced to six months in prison for tweets he posted while in the United States, according to Axios.

Chinese police detained 20-year-old Luo Daiqing last July in his hometown of Wuhan in central China, the news site reported. The liberal arts major had returned home after the end of the spring semester.

The sentencing came amid a wider crackdown on Chinese citizens posting comments critical of the regime on Twitter, which is banned in China. This, however, appears to be the first reported case of a citizen who was detained for online speech posted while overseas.

Court documents obtained by Axios alleged that from September to October 2018, Luo used his Twitter to post more than 40 comments “denigrating a national leader’s image and indecent pictures,” which “created a negative social impact.”

The account, which has since been closed down, also retweeted images of Winnie the Pooh, a cartoon character censored in China after netizens said Xi’s figure resembled the character’s rotund shape.

The student was sentenced in November 2019 to six months in prison for “provocation,” with the term to include the four months held in detention prior to sentencing.

Sen. Ben Sasse (R-Neb.) in a statement on Jan. 22 called on the Chinese Communist Party to release Luo.

“Don’t forget that the Chinese Communist Party has banned Twitter, so the only people who even saw these tweets were the goons charged with monitoring Chinese citizens while they’re enjoying freedom here in the United States,” Sasse said. “This is what ruthless and paranoid totalitarianism looks like.”

“American universities are places to encourage thought and debate on the challenges facing the world. China is attempting to silence this foundation of our democracy,” he wrote in a Jan. 23 tweet.

I’m calling on the Chinese government to reverse this grave miscalculation immediately. American universities are places to encourage thought and debate on the challenges facing the world. China is attempting to silence this foundation of our democracy.https://t.co/RxPjIt6lJL

The University of Minnesota told The Epoch Times it became aware of the situation following media reports on Wednesday, and did not have any further information at this time.

Chinese students studying abroad are not free from monitoring by the communist regime, causing many to shy away from publicly expressing opinions critical of the regime. Chinese student associations in universities, which have close ties to their local Chinese consulates, “alert Chinese consulates and embassies when Chinese students, and American schools, stray from the Communist Party line,” Vice President Mike Pence said in a 2018 speech.