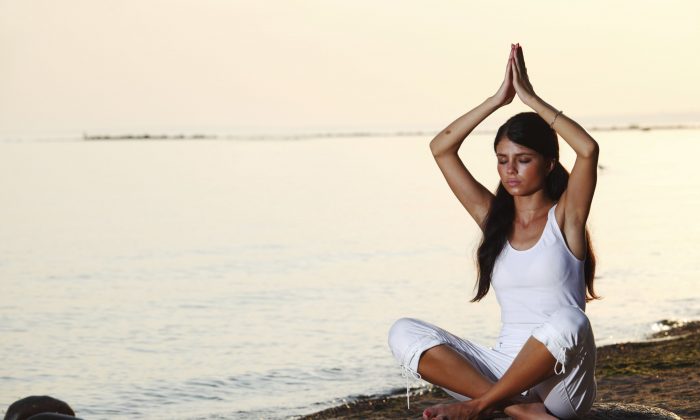 There’s a reason tai chi, yoga, and meditation all put a special emphasis on breathing—it’s because most people don’t breathe enough. When our breathing is adequate, the blood and tissues are being fully oxygenated and nourished for optimum metabolism. (IvanMikhaylov/iStock/Thinkstock)
Mind & Body

Sabrina Chen-See
View profile
Follow
biggersmaller
Print
To fully oxygenate your blood, you will need to fill your lungs with enough air on each breath.
Bacteria and viruses thrive in a low-oxygen environment.

You can go weeks without food before starving to death. You can go days without water before dying of thirst. But you can’t hold your breath for even a few minutes without passing out.

The importance of breathing to life itself cannot be overstated. There’s a reason tai chi, yoga, and meditation all put a special emphasis on breathing—it’s because most people don’t breathe enough. What’s enough, anyway? If you are breathing enough, your blood and tissues are being fully oxygenated and nourished for optimum metabolism (tissue function).

A simple way to measure this is with a pulse oximeter. To fully oxygenate your blood, you will need to fill your lungs with enough air on each breath. Unless you’re consciously deep-breathing, the only other times you will tend to maximize your lung capacity with oxygen is during aerobic exercise or hyperventilation. Most sedentary people only breathe in as far as the bronchi in the chest and never really fill the lungs themselves.

How does the lack of deep breathing impact your life?

2. Restless sleep
Breathing should be automatic when you’re asleep but if you’re not expelling enough carbon dioxide, your body will wake you to take a deeper breath so you don’t die in your sleep. This is known as sleep apnea—a problem that is reaching epidemic proportions, with the sales of CPAP breathing machines growing exponentially. It is the same issue with newborns when learning how to self-regulate their breathing. The lungs are the last vital organs to be fully functional and sleep apnea is one possible cause of sudden infant death syndrome.

3. Increased respiratory issues
When lungs don’t fully expand, the alveoli (air sacs) don’t fully inflate. It is the inflation that drives circulation of the blood to the lungs. Therefore, if particulate matter, bacteria, and viruses make their way into the lungs, little can be done to get them out. This is especially so if the person can’t generate a productive cough. Conversely, respiratory problems like asthma and emphysema can make it harder to breathe deeply as well. Bacteria and viruses thrive in a low-oxygen environment. Increased breathing improves circulation and brings immune factors and oxygen to the lungs and all other parts of the body.

4. Premature aging
Oxygen breaks down into free radicals in the body and needs to be constantly replenished. These free radicals are responsible for accelerated cell death, such as organ dysfunction, degenerative changes, wrinkles, slower healing, and chronic disease. Sedentary people who aren’t getting fresh oxygen into their bodies are slowly rotting from the inside.

What may start off as a bad habit (i.e. slouching, lack of exercise, poor posture) can turn into a physical problem preventing proper breathing. X-rays of the thoracic spine (attached to ribcage and chest) of chronic poor breathers show mal-alignment (scoliosis, excess curve or lack of normal curve) and premature osteoarthritis.

Chiropractic care is a very valuable tool to improve the health of the thoracic spine, chest wall, and breathing. A chiropractic examination will determine the primary causes of the shallow breathing, compensatory changes, and lifestyle factors involved. The chiropractor may start by adjusting the entire spine, focus on the thoracic region to increase mobility, reduce nerve interference, and re-align the spine. In some cases, the chiropractor may start with the upper neck, which houses the brainstem and is the primary brain centre for respiration, among other vital roles.

The program of care (frequency and duration) is dependent on the severity of the condition, the chronicity, and the healing capacity of the patient. There are many recorded cases of patients who have had chiropractic treatments breathing better, experiencing fewer respiratory conditions and asthma attacks, and no longer requiring CPAP machines to breathe at night.

Sabrina Chen-See is a paediatric and family wellness chiropractor based in Vancouver. She is a firm believer in making positive contributions to society, and regularly volunteers her time and chiropractic skills for community and charitable events. Website: www.DrChenSee.com.