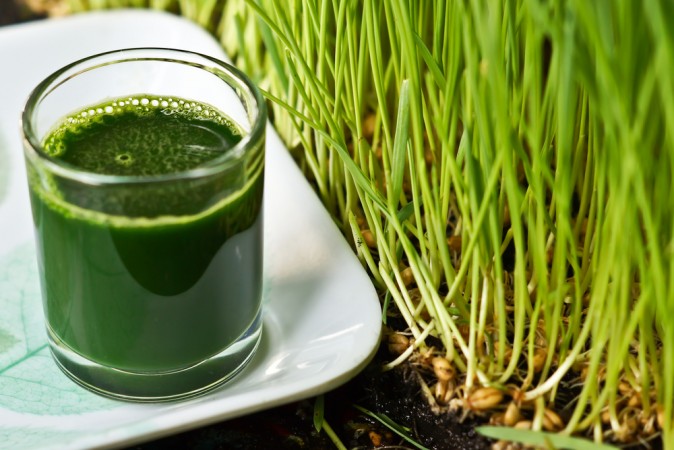 What if there was a health food that cleansed your blood, detoxified your liver, made your body more alkaline, built up your red blood cell count, contained 17 amino acids and 80 different enzymes, contained all known minerals, oxygenated your body systems, and provided a good boost of energy? Wouldn’t you want an ounce or two?

Wheatgrass juice, also called “liquid sunshine” is a superfood made up of 70% chlorophyll. It is about as close as you can come to hemoglobin, the compound in your blood that carries oxygen. It’s easy to digest (taking less than 5 minutes), and it can provide a boost of energy much more healthful than downing a can of Red Bull or any other energy drink.

Wheatgrass is unique. It builds and destroys simultaneously. It builds up your immunity and your red blood cell count, while it destroys (or neutralizes) toxins. It purifies and cleanses while strengthening and providing super-charged nutrition.

If you’re ready and raring to go on a wheatgrass juice kick, have at it, but know that you should start slowly. Wheatgrass juice can have an effect on some people almost immediately, so it is recommended that you ease into your new habit of healthy wheatgrass shots. A single ounce is plenty to get you started. Any more than that can cause you to become nauseated or give you a case of the trots (diarrhea). For the stout of heart, you can take two ounces, but work up to over a period of a couple of weeks, at least. Because of the many enzymes it contains, wheatgrass juice goes to work almost immediately, and if your system is the least bit toxic, it may do too good a job in eliminating those toxins.

One of the more noted pioneers of the use of wheatgrass juice was Anne Wigmore. Over a period of about three decades, Ann helped people recover from all types of chronic illnesses, including cancer by concentrating on regimens of raw foods and wheatgrass juice. She founded a health resort in the United States in the year 1968 called the Ann Wigmore Foundation, which was renamed the Hippocrates Health Institute after her death. While living, Ann was given the title of “the mother of living foods.”

One of the popular contemporary theories of disease is based on inflammation. Wheatgrass juice contains P4D1, a “gluco-protein” that acts like an antioxidant, reducing inflammation. There are a myriad of maladies that wheatgrass has been used to treat. Among those diseases and conditions that people have treated with wheatgrass juice are skin disorders, digestive disorders, arthritis, asthma, insomnia, kidney stones, ulcerative colitis, cancer, fatigue, allergies, diabetes, urinary tract infections, and many others.

If you’re ready for some wheatgrass, “the ultimate blood purifier,” you have the option of sprouting some of your own homegrown specimens or buying a swill of it every day at your local health food store. Wheatgrass is one of the more popular seeds for sprouting, and it is quite simple to grow on your own at home.

*Image of “wheat grass” via Shutterstock