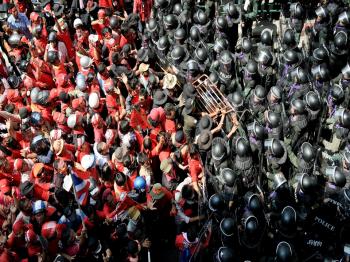 Jasper Fakkert
Editor-in-Chief, U.S. Editions
Jasper Fakkert is the Editor-in-chief of the U.S. editions of The Epoch Times. He holds a Bachelor's degree in Communication Science and a Master's degree in Journalism. Twitter: @JasperFakkert
View profile
Follow
biggersmaller
Print
After a month of tense build-up, thousands of “red shirt” protesters and Thai security forces came to deadly clashes on Saturday, with chaotic scenes of streets filled with tear gas and the sounds of gunfire and explosions continuing into the night.

Ten people have been killed in the clashes and 500 injured according, to hospital officials, AP reported. Among the dead are Thai soldiers, civilians and one Japanese journalist.

Last week, Prime Minister Abhisit Vejjajiva had declared a state of emergency in an attempt to restore order in the country. His decision came after thousands of protesters marched on parliament on Wednesday, some bursting into the building, forcing members of parliament and ministers to flee.

The protesters, commonly referred to as “red shirts,” have been demonstrating in the capital for a month demanding the government to resign and call new elections. They are loyal to former prime minister, Thaksin Shinawatra, who was ousted in a military coup in 2006 after six years in power.

An army spokesperson who appeared on national television on Saturday evening said that security forces had retreated and encouraged the protesters to do the same. Protest leaders have also now called on demonstrators to pull back. Throughout the month of protests, the "red shirts" have insisted they will keep the demonstrations peaceful.